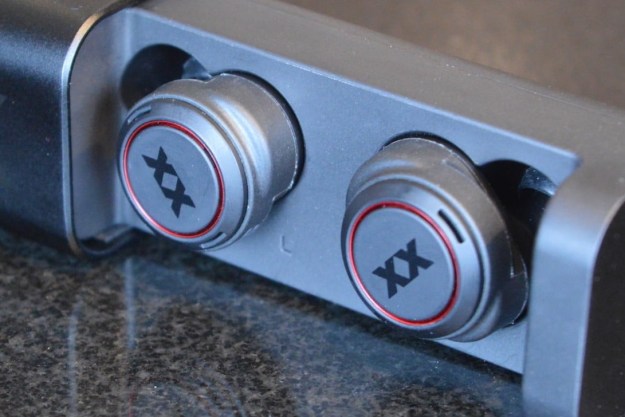 “You won't find bigger bass or a better battery life, at any price.”

JVC’s true wireless earbuds don’t get a lot of attention these days as the venerable Japanese audio and video company has been pushed out of the limelight by a host of new brands like 1More, Earfun, and JLab (not to mention stalwarts like Sony, Bose, and Jabra). And that’s too bad because JVC makes some damn decent buds.

I recently had a chance to try out the latest in the company’s Xtreme Xplosives series, known for their dual emphasis on bass and ruggedness. The $200 HA-XC90T take the XX philosophy to its furthest extreme yet, with huge battery life and some of the biggest bass I’ve ever heard from a set of earbuds — wired or wireless.

Everything about the XC90T are extreme. They come with a big, brushed-black aluminum charging case that could easily cause some damage if you were to hurl it at someone. The buds themselves are big, far larger than most I’ve tried, and they pack a record-breaking 15 hours of battery life between charges, with another 30 hours of juice in the case — at least according to JVC. I haven’t actually left them running for that long to see if that’s 100% accurate, but these factory specs are rarely wrong by more than a percent or two, give or take.

The quick-charge function (not that I think you’ll ever need it) is about average for these devices: 10 minutes of socket time gets you 90 minutes of playback. You can use each earbud independently for both calls and music.

Despite their size, they sit securely and are surprisingly comfortable. And holy cow, the bass is truly huge. I’ve heard big bass before: The Jabra Elite 75t are a good example of powerful low-end in a set of true wireless earbuds, as are the Powerbeats Pro. But the XC90T are next-level.

You can turn the bass boost feature on and off with a triple-tap of the right earbud, but even in non-boosted mode, these buds are like having miniature subwoofers in your ears.

Amazingly, JVC has managed to tune the acoustics so that all of that low-end goodness doesn’t overwhelm the mids and highs. It comes close at times, and I admit I found myself wishing for a way to tweak the EQ, but if you’re a bass-head, you’ll be in heaven. In addition to the usual AAC and SBC codecs, JVC includes aptX support for Android phones.

Their IP55 rating for water and dust resistance is up there with some of the best workout earbuds, like the $200 Sony WF-SP800N and $200 Jabra Elite Active 75t, but both of these models offer a feature that’s absent on the XC90T: Active noise cancellation (ANC).

This brings me to my biggest criticism of the XC90T: Despite their excellent performance, they’re missing several features that should really be on any set of true wireless earbuds at this price:

So yeah, at $200, they feel overpriced to me, but if you find them at a discount, these are a fantastic set of mega-battery, mega-bass workout earbuds that will handle anything you can throw at them.

Topics
The best Blu-ray players for 2023
The best home theater projectors you can buy in 2023
Best Amazon Echo Deals for January: Get an Echo Show for $45
The Apple HomePod is back, with new smarts, and a lower price
The best speakers for 2023: great hi-fi options for music and more
Why the Nest Hub Max still rocks as a kitchen TV
Stream live sports without cable with Sling — now 50% off
OnePlus Buds Pro 2 to support Android’s new spatial audio feature
Should you mount your TV above a fireplace?
Disney Plus Free Trial: Can you watch for free in 2023?
The best subwoofers you can buy in 2023
The best Dolby Atmos soundbars for 2023
Super Bowl 2023 halftime show: who’s performing?