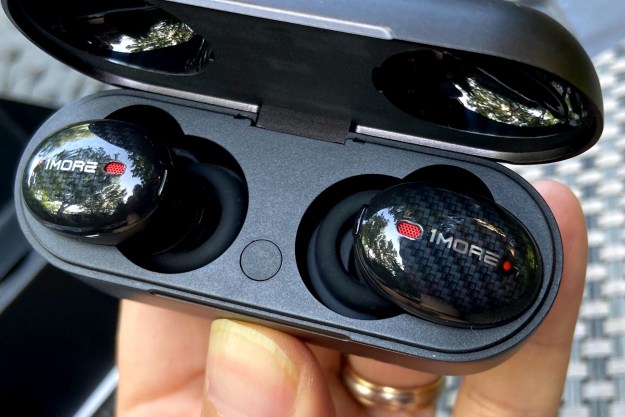 1More has a reputation for building affordably priced, high-quality wired and true wireless earbuds that deliver features and sound quality that equal products costing much more. We like 1More products so much, they regularly feature in our “Best of” lists.

So when the company announced its first true wireless earbuds with active noise cancellation (ANC) — the $180 1More True Wireless ANC — we were keen to try them out.

If history is any guide, these buds should prove to be the AirPods Pro alternative we’ve been waiting for.

Did 1More deliver the goods? Let’s check them out.

1More apparently expects you to keep the True Wireless ANC’s box for as long as you own them. That’s the only explanation we can think of for the massive, thick-walled coated cardboard container that the buds come in. Don’t get me wrong, it’s beautiful, with a magnetically closing hinged cover (something we see all too often) and colorful printing on every surface.

But this jewelry-box design and heavy use of plastics and foam on the inside makes for a nearly impossible-to-recycle package. I’d like it if 1More used less material.

Cradled in this treasure box are the charging case, the earbuds, a USB-C charging cable, a storage bag, and a generous supply of ear tips and “O hooks” (1More’s name for the ear fins).

The True Wireless ANC, like the 1More Stylish which they closely resemble, aren’t the smallest earbuds you can find, but they make up for their slightly bulbous bulk with a cool carbon fiber-esque pattern under a clear-coat glossy surface.

The charging case looks like it houses a stealthy James Bond weapon, not a set of wireless buds.

Combined with bright hits of red in the microphone recesses and the ear-tips, this gives them the look of a Formula 1 race car.

That high-end vibe is repeated in the wireless charging case which has an ultra-smooth, satin-finish aluminum shell. It looks like it houses a stealthy James Bond weapon, not a set of wireless buds. Like a luxury coupe, the seams line up perfectly and the lid snaps open and close with a satisfying click.

It’s bigger than the case for the AirPods Pro ($249) or Jabra Elite 75t ($180), but thanks to its flowing, curved corners, it’s still relatively comfortable to keep it in your pants’ pocket.

The earbuds are easy to pluck from their charging nooks and just as easy to replace regardless of which size of O hook you have installed.

When it comes to getting the best sound from a set of true wireless earbuds, a secure fit is key. That’s why it’s fantastic to see 1More package the True Wireless ANC with so many ear-tips (seven sizes and two styles) and O hooks (three sizes and a no-hook option).

Unfortunately, after trying every single combination of ear-tip and O hook, I couldn’t get the buds to stay firmly lodged in my ear canal. This was a surprise, not only because of how many options I had to play with but also because this rarely happens to me. Out of more than 30 models I’ve tried in the last 24 months, I’ve only had two that just didn’t fit no matter what I did.

Twisting them into place was easy enough — and very comfortable — but not long afterward, they’d work themselves loose. They use an oval-shaped ear-tip, which might be part of the problem, but then again so do the AirPods Pro and I find them perfectly secure.

I suspect the real reason is that my ear canals are quite deeply recessed relative to the outer parts of my ear. The True Wireless ANC’s tower (the part the ear-tip is attached to) is short, and the asymmetrical shape of the body means you can only twist it so far before it’s blocked by your ear.

As with all things fit-related, your experience will likely differ from mine, but if you’ve had trouble getting a good fit with other earbuds, it’s something to keep in mind.

The True Wireless ANC’s controls are a blend of push-buttons, which sit on the top (or rear edge depending on how you have them seated in your ears) and touch controls. The touch controls are strictly for managing the ANC mode. Two taps on the earbud move you from ANC off, to ANC level 1, to ANC level 2, to ambient (passthrough) mode, and then back to ANC off.

This combo of touch and physical controls gives you everything you need including volume up/down, play/pause, call answer/end, track skip forward/back, and voice assistant access, but there’s no way to customize which button presses trigger them. This would be especially helpful with ANC: I’d love a way to snap quickly in and out of ambient mode, instead of flipping through all four modes.

Still, once you memorize the patterns, the controls are responsive and easy to use.

The wear sensors, which let you automatically pause and play music when you remove or insert the buds, work really well, but there’s no way to disable the feature. Inside the 1More Music app, your choices are “auto-pause,” or “auto-pause and play.”

Once connected, the True Wireless ANC maintained a very strong and stable wireless signal, though that signal could only stretch about 30 feet before faltering. Unlike some other wireless earbuds, the True Wireless ANC try to establish their link the moment you open their charging case. I found that if I pulled them out before both earbuds indicated they were paired (the LED switches from blue to red) they wouldn’t always successfully re-pair with my phone.

I’m a little disappointed by the True Wireless ANC’s battery life. They’re rated for six hours of use with ANC turned off, and just five hours with it turned on. Granted, that’s still better than what Apple promises for its AirPods Pro (4.5 hours with ANC on, five hours with it off), but when you look at total play time, with the charging case included, the 1More top out at 22 hours, versus 24 for the AirPods Pro.

On the one hand, that’s enough juice to get you through a whole day without looking for a charging cable, and the True Wireless ANC’s quick charge of 15 minutes for two hours of play time definitely helps.

On the other hand, we’re seeing plenty of inexpensive true wireless earbuds like the JLab Epic Air ANC which can go anywhere from eight to 12 hours before heading back to their charging case, and which have total times of up to 48 hours.

The 1More True Wireless ANC are the first true wireless earbuds to be graced with a THX certification. This means that THX has evaluated the earbuds against some of its technical standards for things like left-right stereo synchronization and distortion, but a THX certification is not a guarantee of a specific level of sound quality. Think about it like a kind of insurance: It means that THX has independently tested the gear and found it to have a baseline level of performance.

They possess an incredibly well-balanced sound signature, which favors neither highs nor lows.

In the real world, there’s no way to know what the True Wireless ANC would have sounded like prior to THX’s involvement, so I’m not going to attribute any part of the sound I heard to THX.

THX or no, the 1More True Wireless ANC sound excellent.

They possess an incredibly well-balanced sound signature, which favors neither highs nor lows. Instead, you get a clear and detailed performance across all frequencies. That clarity and precision exceed what many comparably-priced products can do, like the Anker Soundcore Liberty 2 Pro, Jabra Elite 75t, and even Apple’s AirPods Pro.

On tracks like Fleetwood Mac’s Little Lies, this precision lets background vocals inhabit the ethereal space slightly above and slightly out from the main soundstage — the sort of stuff that reliably produces goosebumps.

My only complaint is the lack of adjustable EQ. As beautifully balanced as they are, I’d prefer a snick more bass just to warm up the sound a little, but there’s no way to do that. In fact, if you’re a bass head, you’re probably better off with the Jabras.

If there’s one thing I’ve learned while reviewing true wireless earbuds with ANC, it’s that there is a huge spectrum of quality. Some earbuds that offer this feature, like the JLab Epic Air ANC, produce almost no noticeable improvements, while others, like Apple AirPods Pro, create an incredible you’ve-got-to-hear-it-to-believe-it cone of silence.

The ANC feature produces an audible hiss when there’s no music playing.

I’d hoped that the 1More True Wireless ANC would be closer to the AirPods Pro end of the spectrum, but they’re actually in the middle.

With two levels of ANC, they do a decent job of reducing some external sounds, with a definite sweet-spot in the lower frequencies, but it’s not nearly as consistent as what you’ll find with Sony’s WF-1000XM3 or the AirPods Pro. But what’s unfortunate is that the ANC feature produces an audible hiss when there’s no music playing. This keeps the True Wireless ANC from being a good tool to simply drown-out the buzz of an office or a coffee shop.

Another area of compromise is the ANC’s ambient or passthrough mode. The goal of an ambient mode is to let you hear the outside world in order to have a conversation with someone or just to be more aware of your surroundings. But just as key is the ability to hear your own voice with clarity so that you don’t inadvertently raise it too loudly. It also makes phone calls sound way more natural. The ambient mode definitely lets outside sounds in, but your voice remains distinctly muffled.

Call quality is a bright spot for the True Wireless ANC. Callers said my voice remained clear even when there was a good amount of background noise to contend with like passing traffic. Every now and then, my voice would drop in loudness, but I couldn’t determine what was causing that to happen.

Still, the lack of an ambient mode than could effectively let me hear myself proved annoying.

I really wanted to love the 1More True Wireless ANC and their slick design and sound quality certainly set a high bar. But average battery life, a lack of custom EQ or button functions, and disappointing ANC keeps these buds from breaking free of a very crowded pack.

Though they don’t have wireless charging, Jabra’s Elite 75t cost the same, have a bigger, bass-forward sound, superb comfort and fit, generous battery life, and soon, they’ll even have ANC. When you add in the insane amount of customization the Jabra Sound+ makes possible and its IP55 rating for dust and water, I think most people will be happy trading a bit of sound clarity and precision for the Jabra’s many strengths.

1More backs the True Wireless ANC with a one-year warranty. The earbuds and charging case look very well built, and I expect they’ll last through many years of use. But, without an official IP rating for water resistance, you’ll have to take extra care not to expose them to water or sweat.

No. As good as their sound quality is, 1More is charging a lot of money for a feature set that is just not as good as what you’ll find from other companies.

The best wireless headphones for 2022: Which should you buy?