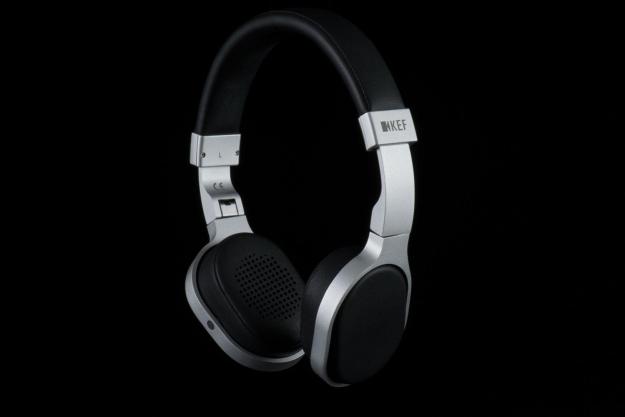 KEF audio is best known for its diverse lineup of hi-fi speakers and home theater systems. However, like any savvy speaker designer, KEF has recently utilized its four decades or so of audio experience to make its play in the lucrative game of hi-fi headphones. The product of its efforts is its new M series. Wading into the crowded waters of modern headphone design with caution and intent, KEF’s M series includes just two offerings: the M200 in-ears, and the M500 on-ears ($300).

The flagship M500 are crafted with sleek lines of aluminum and rich leather accents, side-stepping the gaudier celebrity headphone crowd to match the minimalist aesthetic of similar offerings from Harman Kardon, Bowers and Wilkins, and others. After prying them away from a flock of DT staffers who found themselves powerless against their charms, we spent some quality time with the M500 to find out how KEF’s flavor of hi-fi elegance matched up.

As we’ve come to expect from today’s superb class of hi-fi cans, the M500 come in a premium black box with a sheath of cardboard around the exterior dawning handsome portraits of the phones’ outer and inner workings. Pulling back the ribbon of the main box, we exposed a hard shell black case within, nestled in a surprisingly flimsy layer of plastic.

As we opened a half-moon case, we got our first glimpse of the M500, collapsed in on themselves in a tidy bundle. Expanding the ear cups gave off a solid click and revealed thick cuts of brushed aluminum, accented with a smooth layer of black leather around the head band and ovular earpieces. Underscoring today’s thirst for minimalism, KEF kept its moniker restricted to two graphite logos painted at the ends of the headband.

Inside the case was a collection of accessories including a removable flat cable with an iOS inline control microphone, a flat standard cable, and both a quarter-inch and airline adapter, each with gold-plated jacks.

It’s not much of a stretch to assert the KEF M500 sound good, even before an evaluation. With KEF’s history, we were pretty sure that the company wouldn’t come to market with a half-baked design. But aside from sound quality, one of the traits that made the chic little M500 such a hit around the office was the stellar ergonomics of the design. The second you put these phones on, you can just tell they were built for comfort.

The second you put these phones on, you can just tell they were built for comfort.

The M500’s aluminum frame is extremely light (around 200 grams), and while KEF’s proprietary hinge system, called the Smart Hinge, is no revelation in the well-founded world of collapsible cans, it works very well. After unlocking the hinges, the supporting arms swing easily along the horizontal axis while the slim ear pads rotate on the vertical axis to conform perfectly to your head. Supplementing the design are comfy layers of foam padding around the ear cups and across the headband. In practice, that translated to hours of listening with virtually zero discomfort.

Inside the ear cups rest 40mm neodymium dynamic drivers which boast a wide frequency response of 20Hz-20 kHz. The company also posts a frequency response chart on its website, and it traces a refreshingly even line for most of the graph, with just enough bumps to infer character.

A small cavity at the upper back of the left ear cup harbors the 2.5mm input jack for either of two included headphone cables. The iOS cable sports an extremely light inline control mic fashioned from solid aluminum and located about a foot down, with raised black keys in the usual 3-button pattern. Both included cables run 1.3 meters long and terminate with 90-degree 3.5mm jacks plated in gold.

The M500 offered a smooth and expressive sound signature, reproducing frequencies with an excellent balance of warmth and detail. The lower register was firm and restrained, but held its own on heavier bass tracks, and the smooth lower midrange gave way to laser accuracy in the upper register that made for tight, clean attacks of cymbals and lighter percussion. Indeed, transients are the M500’s forte, outlining plenty of detail, especially at the outer edges of the stereo image.

Carter’s Neil Peart-sized kit [was] packed into a left-channel cavern so deep we could practically climb into it.

The first song during which the M500 really caught our attention was “Before Your Very Eyes,” by Atoms for Peace. The M500 flexed its dynamic muscle early and often in the song as they brought expressive resonance from the multiple digital effects that buzzed in spherical little swells from left to right and rippled into the back layers of the sound stage. The kick drum groove was full and firm, while the backing vocal flowed behind the canvas in a smooth wash of reverb.

Another highlight came from Vampire Weekend’s “Cape Cod Kwassa Kwassa.” While we sometimes wished for more instrumental separation at the center image in more raucous rock tunes, this track showed the M500’s penchant for vivid definition, especially evident in the percussion. The shakers placed at the sides in the production sounded live, while each different hand drum tone was eloquently revealed, bouncing and popping all over the sonic landscape.

An even more intimate percussion experience came from Dave Matthews’ “Pay for What You Get.” The seemingly endless series of cymbals and toms in Carter’s Neil Peart-sized kit were packed into a left-channel cavern so deep we could practically climb into it. As we listened, we let the cymbals splash in smooth sustain around us, following each hit of various drum heads as they provided a rainbow of resonant harmonic timbres. On the right side, the dry acoustic guitar offered clean and well-defined finger movements, while the B3 organ at the center bubbled in a guttural expanse.

If there were any small quibbles we had with the sound of the M500, it had more to do with the unavoidable comparison to our recent evaluation of top-tier on-ear competitor, the Sennheiser Momentum, than any real shortcomings in the headphones themselves. In comparison to the more affordable Momentum, we missed some presence in the vocals at the M500’s center image on some tunes as well as the aforementioned tendency for a slight lack of instrumental separation on louder rock tracks, or on larger ensemble recordings like Peter Tosh’s “Downpressor Man.”

Still, those small notes aside, the M500 were a joy to listen to and to wear, providing one of the most comfortable, smooth, and expressive listening sessions we’ve ever experienced from a set of on-ear cans.

Providing elegance in style, sound, and comfort, and capsulized in a travel-ready package, KEF’s M500 is a formidable offering to the ever expanding hi-fi genre. We think their $300 price tag is a bit high for a set of on-ears, but sometimes you have to pay a little extra for luxury. Pricing aside, KEF’s new M500 are a smooth ride all around, and a worthy choice for your next headphone splurge.

Topics
The best noise-canceling headphones for 2023: Sony, Apple, and more
The best kids headphones of 2023: for fun, safety, and more
Bose Music Amplifier takes a direct shot at the Sonos Amp
Best AV receivers 2023: top sound for your home theater
This massive OLED TV has a $1,000 price cut at Best Buy today
I replaced my kitchen TV with an Echo Show 15 — and I kinda liked it
The best HDMI cables you can buy in 2023
The best speakers for 2023: great hi-fi options for music and more
The best Blu-ray players for 2023
Why the Nest Hub Max still rocks as a kitchen TV
Stream live sports without cable with Sling — now 50% off
OnePlus Buds Pro 2 to support Android’s new spatial audio feature
Should you mount your TV above a fireplace?