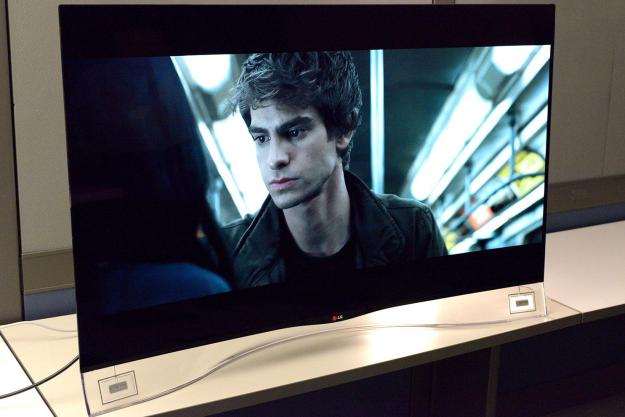 “LG’s 55EA9800 Curved OLED ushers in a new era in televisions with plasma-quality picture in a razor-thin frame.”

LG’s curved OLED television has taken us by surprise three times now. The first was at CES 2013, when LG pulled a small army of the concave sets out of nowhere and at the last minute. The second came early last week when we learned that the curved OLED, officially dubbed the 55EA9800, had suddenly landed for sale in the US. The third came yesterday, when we got a chance to evaluate the television over the course of several hours at LG’s testing facility in Chicago, Illinois.

Where did this curvy OLED design come from? Why is the first OLED to arrive in the US curved and not flat? And, more importantly, is this TV really everything it’s been hyped up to be? We answer all those questions and more below.

The $15,000, THX-certified 55EA9800 (EA9800) comes out of its box in one piece – no assembly required. Our first impression was that the TV felt heavier than expected. Considering how thin and light OLED panels typically are, this set’s 38 lb. weight seemed odd. Then it became clear that the majority of the weight was coming from the TV’s clear acrylic base, which is integrated into the TV and can’t be removed. As such, this TV can’t be mounted on a wall.

Perhaps it’s just the novelty of a curved television, but there’s something sexy about the EA9800’s shape. When you stare straight at it, its curves aren’t apparent, but as you move around the room, the TV almost seems to move with you, like two tango dancers staring each other down from across the floor before colliding in a torrent of action.

Equally appealing is the TV’s back panel which, as TV rears go, is as attractive as it gets. It’s made of smooth, gently-curved carbon fiber and it doesn’t feel cheap the way even some expensive LED TVs can, leaving the TV feeling refined and built with intention.

No matter how many times we see an OLED panel, we can’t help but gawk at just how thin it is. We didn’t have a ruler handy during our evaluation time, but we feel safe saying the depth at its thinnest point is just barely over a quarter of a inch. It’s astounding to behold. As you move further in, the TV gets a little thicker. And because it is curved, the total depth of the TV winds up being around 7-inches. Fortunately, that total depth helps accentuate how thin the screen really is.

In the box with the TV was a Magic Motion remote, a standard remote, four pair of 3D glasses (two “designer” and two clip-on) a very brief quick set-up guide, some batteries, a Skype-capable camera and some break-out cables for legacy connections.

It’s probably safe to say you get that the TV is curved. But why? What benefit is there to such a design?

It has been suggested that the slight wrap-around effect offers a more immersive viewing experience – and we’ll discuss our opinions on that in the performance section – but we feel there’s more to it than that. There’s a “because we could” vibe to the set that we can’t get away from. OLED panels are fairly flexible, and that flexibility opens new design possibilities for the first time in television. The design is striking, so LG succeeded on that front. Perhaps the real question is: Why not a curved TV?

As for on-board sound: LG built two clear speakers into the base of the television. We’re going to jump ahead into the performance section here and get this out of the way: This TV sounds pretty bad. That said, we totally saw it coming. The TV’s cabinet is way too thin for speakers and the base is clear, so the speakers also had to be clear. Otherwise, the base would have destroyed the TV’s sleek aesthetic. Nothing a sweet sound bar or home-theater system can’t take care of, though.

(Not into numbers? Skip down to “real-world performance.”)

Because of the limited supply of the EA9800 at the time of our evaluation, it was necessary for us to share some of our time with other reviewers. For this review, we spent a fair amount of time co-testing this TV with Gary Merson, noted TV reviewer for HDGuru and NBC. Merson brought a collection of fancy testing equipment which provides some very detailed metrics on certain performance parameters such as brightness, black level and color accuracy.

While testing brightness and black level, we discovered two notable points of interest (which we’re sure Merson will cover in deeper detail within his own review): 1. The EA9800 sample we reviewed arrived with a number of what we’re calling “lazy” sub-pixels. We stopped counting them around 40. 2. Using a 100 IRE brightness window test pattern (stay with us, people!) we discovered that the TV only sustains maximum brightness for about a minute before it begins to slowly dim down over the next four. Sounds pretty bad, doesn’t it? Maybe not.

The sub-pixel issue is bad news in that it indicates there may be a quality control or production issue at the manufacturing level – that’s not good. [Editor’s note: This issue, if indeed caused by TFT drive current deviation as LG maintains, is not limited to OLED technology] But, from a practical standpoint, the sub-pixels are so intensely small that they weren’t visible with the naked eye from further than 1.5 feet. In fact, it took a 4-second exposure on a Nikon D8000 with a 50mm f/1.8 lens to capture the errant pixels. As a result, the image we took exacerbates the problem considerably just so that it can be seen. But in real-life viewing sessions, these lazy pixels were completely undetectable and had zero visible impact on the performance of the television.

This is disconcerting. That many lazy pixels can’t be considered acceptable in a production TV. Granted, this is one of the first runs, but we’re pretty sure the review sample we tested was vetted before being sent to us. Hopefully, the problem that was discovered will be addressed, but until LG has a chance to deal with it, there’s no way to know whether the sets arriving for sale in the US will exhibit the problem. Early adopters should be aware, but also understand it was an invisible issue in real-life viewing.

The dimming brightness we witnessed is, in our opinion, a non-issue. After gathering wattage meter data in coordination with brightness measurements, we concluded that the TV only dims white pixels when they are driven full-blast and non-stop for a minute or more. It’s a protection mechanism that is designed to keep the OLED cells from being damaged, we believe (LG’s on-site engineer was not able to comment at the time). Change the pixels’ job for even a fraction of a second, and it bounces right back to full brightness again. Again, in practical use, this will never be a problem for anyone. Ever. Even if you watch nothing but downhill skiing events or ice skating competitions for months on end, the pixels will never be driven at full brightness for more than a few seconds at a time. Eventually something below reference white will come along and reset things.

Simply put, the EA9800 curved OLED looks spectacular. The only other TV’s that have evoked as much awe this year have been Panasonic’s VT60 and ZT60 plasmas and the Samsung F8500 plasma.

Perhaps it’s just the novelty of a curved television, but there’s something sexy about the EA9800’s shape.

When set in THX Cinema picture mode, this television displayed excellent black levels – as in, a complete absence of light. Brightness levels were capable of exceeding THX standards and, outside of THX mode were capable of retina-destroying brightness (though black levels took a hit at this preset).

True to LG form, colors were also superb. The THX cinema mode had them as close to ideal as we think is possible without an ISF-certified calibration. 3:2 pulldown also got a pass, thankfully.

Motion resolution, however, didn’t do well without some motion-smoothing processing in place. Since motion smoothing introduces the dreaded “soap-opera” effect, we left it off. This was our singular source of disappointment. We’d hoped for a judder-free picture from such advanced technology. Ah well, there’s always next year.

Finally, let’s address this curve thing: Contrary to our suspicions, curving the screen didn’t cause any of the issues we had suspected. Off-axis response was unaffected by the TV’s curvature, was far better than most LCD-based televisions, and was on par with top plasmas. Nobody loses anything by sitting off to the side, but that’s because nobody gains anything from siting in the center. As far as viewing the TV’s picture was concerned, the curve did nothing for us.

But we still maintain this is one sexy TV and that the curve is a big part of it. Were it not for the fact that the curve precludes wall-mounting, we’d give the design element a pass. Fortunately, flat OLEDs are on their way, so don’t get all worked up thinking the gimmick ruins everything. It doesn’t. In fact, it probably sells more TVs.

It would seem LG still has a couple of bugs to iron out, but we kind of expect that from first-generation technology. Even so, this TV looks fantastic, and it shows that OLED appears to be in a great position to deliver the picture quality of today’s best plasmas in an ultra-thin frame similar to LED televisions. Yes, it’s expensive. We knew it would be. But this TV is a sign of things to come. It’s a little glimpse into the future and is presently a tough TV to produce. That means early adopters will pay handsomely, but they’ll also be rewarded with something unique and ground-breaking.

As for the curve: We’re just happy the gimmick (ahem…design) didn’t get in the way of the picture quality. We’ll be wall-mounting OLEDS like cheesy prints from Target soon enough. In the meantime, why not have something to get excited about?