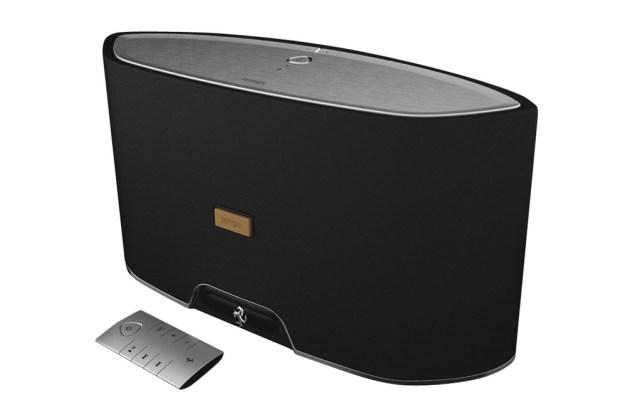 “To be sure, the GT1 is a beautiful speaker with the capacity for impressive sound. But in the ultra-competitive Bluetooth market, there’s no room for skimping -- especially when you’re at the top of the price range.”

Ferrari is a highly evocative brand. The name itself can inspire a whirlwind of emotions among car enthusiasts. Ferrari’s cars are absolute wonders of modern engineering, magnificent not only for their incredible performance and racing pedigree, but also for their gorgeous design – immaculately handcrafted into a near-perfect convergence of man and machine.

For others, however, Ferraris are little more than prohibitively priced, ludicrously impractical vehicles, nearly impossible to insure, and almost as difficult to keep full of gas.

When Logic3 created its Ferrari line of audio equipment, the company was likely betting that most people would follow that former train of thought. Logic3 is one of the few companies licensed by Ferrari to use the powerful brand as a conveyance of excellence for its products. And we have to admit, the mere mention of the name got us slightly excited and imaginative about the sound capabilities of Logic3’s latest Bluetooth dock, the Ferrari Cavallino GT1.

Then we saw the price tag. The GT1’s $650 asking price is a king’s ransom for a stand-alone dock, reminding us of that whole impractical, overpriced part. We couldn’t help but wonder what percentage of the GT1’s high cost went into its acoustic engineering, and what percentage went to its smooth lines and all those shiny silver horses on the exterior. So, accordingly, we fired the speaker up for a grueling test drive to find out.

Logic3 wastes no time in establishing an aesthetic theme for the GT1. Opening the box, we found a plank of black cardboard framing a matted card in Ferrari Red, accented with silver embossing and adorned with the famed Ferrari stallion. Pulling a way the plank, we discovered a layer of thick foam with a black box of accessories nestled inside, including: 3 different power adaptors for the UK, Europe, and the US, a 3.5mm aux input cable, and a silver remote control. Removing the upper layer, we got our first glimpse of the silver and black dock, laden with sparkling aluminum.

The Cavallino GT1 is shaped into a rounded trapezoid, with black speaker cloth stretched tightly around the majority of its surface. The top is plated by glittered aluminum and features a power/source button with an accompanying LED, and a two-button volume control. On the front is a small black plate of plastic adorned with a silver Ferrari stallion. Pressing on the plate fluidly ejects it outward to reveal the GT1’s iPod dock with 30-pin connector.

Under the hood are two ¾-inch tweeters and two 2 ¾-inch midrange drivers, accompanied by a 6.5-inch subwoofer. Even the speaker’s bass port is made to be stylish with polished-chrome trim, and a mesh screen-cover with another silver stallion stamped in the center. The speaker system is powered by the GT1’s patented “Class HD” amplifier, and runs through Logic3’s DSP, which controls the balance between bass, midrange and treble.

The GT1’s silver remote control is heavy and conveys a feeling of quality, much like the speaker itself (which is seriously heavy – exact weight not disclosed by Logic3, but we’re guessing around 25 lbs.). The surface is brushed aluminum with flush-set keys that control power, play/pause, volume, source, and song advancement or reverse. As you might have guessed by now, a mirrored Ferrari stallion is etched into the bottom. Conspicuously missing from the remote is a button to navigate through your iPod or iPhone while docked.

Unfortunately, streaming music wirelessly via Bluetooth robs the GT1 of its capacity for excellent sound.

When docking your iPhone/iPod for the first time, the GT1 gives a prompt to download its app. Opening the app, we found a virtual control screen for the unit which includes some cool features. There’s a display clock, a weather forecaster, and even a bank of sound clips including Ferrari engines revving up and other ambient sound effects. Also on the app is a volume fader and EQ. We found it strange (and later frustrating) that the only adjustable frequency section on the EQ is the bass.

The LED atop the GT1 glows in three different colors to indicate source: red for dock mode, blue for Bluetooth, and green for aux input. Choosing the Bluetooth source and holding down the power button for 10 seconds sets up the device for pairing. Surprisingly, for a high-end dock, the GT1 uses the Bluetooth 2.1 protocol, an aging version that is two full evolutions behind the most recent version (4.0). Even the majority of the entry-level Bluetooth speakers from our recent portable Bluetooth speaker roundup used version 3.0. More on that below.

We tested the Cavallino GT1 using a variety of music on both our iPhone 5 and 3GS connected via both Bluetooth and 30-pin dock. While hard-docked, we discovered the GT-1 offered a well-balanced sound signature, notable for its full bass, clean midrange, and sizzling treble.

Unfortunately, streaming music wirelessly via Bluetooth robs the GT1 of its capacity for excellent sound. In an A/B comparison, we found the docked iPhone connection facilitated a bold, full sound with an expansive stereo image and a lifelike presence to midrange frequencies. By comparison, the Bluetooth connection resulted in a sound not unlike a poorly tuned FM radio station. This was a major disappointment.

To be sure, the GT1 is a beautiful speaker with the capacity for impressive sound.

As for the general sound signature, the GT1 provided some highly enjoyable moments. The 6.5-inch subwoofer had a powerful, well defined command of the low end, especially when testing the device at higher volume levels. The sub brandished a broad foundation, while still conveying a restrained balance, allowing the midrange and treble free reign of the upper register.

We were also impressed by the GT1’s overall clarity coupled with a titanic max volume that easily filled the room with no audible distortion. The unit’s spritely treble and ultra-clean midrange handily rendered percussion like rim shots and toms with well-defined presence and a decent amount of depth. It also had an easy time with the sweet upper layer of stringed instruments and grand piano, exhibiting silky smooth cascading melodies and crystal clear separation of the instruments, especially on acoustic productions.

However, all that clarity in the upper register seemed to come at a price. The word sizzle kept coming up again and again during our listening, especially on hotter productions. The acoustic guitar on James Taylor’s “Copper Line”, for instance, was so metallic it sounded almost like it was recorded through a cheap pick-up, rather than an elite condenser microphone. And when we auditioned a few favorites from Van Halen’s excessive classic 1984, the shimmering sibilance in the crash cymbals and snares was so overpowering, it was hard to focus on anything else. Throughout our listening session, there was an inconsistency in the high end which could quickly turn from steel radiance, to cellophane static.

Ferrari’s demand for perfection in every facet – from the engine block to the glove box – is the reason for the company’s enduring legacy. That’s why it is so disappointing that Logic3 would use a near-extinct Bluetooth protocol for the Cavallino GT1. The move is tantamount to sticking a Toyota Corolla engine under the hood of a Scuderia. When we pair that with the inconsistencies in the treble and an exorbitant price tag, the math just doesn’t add up.

To be sure, the GT1 is a beautiful speaker with the capacity for impressive sound. But in the ultra-competitive Bluetooth market, there’s no room for skimping — especially when you’re at the top of the price range. Sure, Logic3 makes an AirPlay-compatible version of this speaker which probably sounds better, but the addition of AirPlay will cost you another $100.

If you simply love the GT1’s design, and money is no object, check out the GT1 Air. Otherwise, we suggest skipping the GT1 entirely and considering the Bowers and Wilkins A5 or A7 instead. Without decent wireless performance, the GT1 just doesn’t earn its asking price.

9 Sonos tips, tricks, and little-known features
What is Tidal? The hi-fi streaming music service fully explained
What is Spotify? Music, pricing, and features explained
What is aptX? Cutting through the clutter of Qualcomm’s codecs
The best romantic comedies on Netflix (December 2022)
Best headphones for 2022: Sony, Bowers & Wilkins, and more
The best TV brands of 2022: from LG to TCL, which should you buy?
The best home theater projectors you can buy in 2022
Looking for a big TV? This 75-inch TCL is $500 at Best Buy
1-day flash sale drops the price of this 70-inch TV to $400
The best 4K TVs for under $500: premium picture on a budget
The best comedies on Hulu right now
The best sci-fi movies on Hulu right now