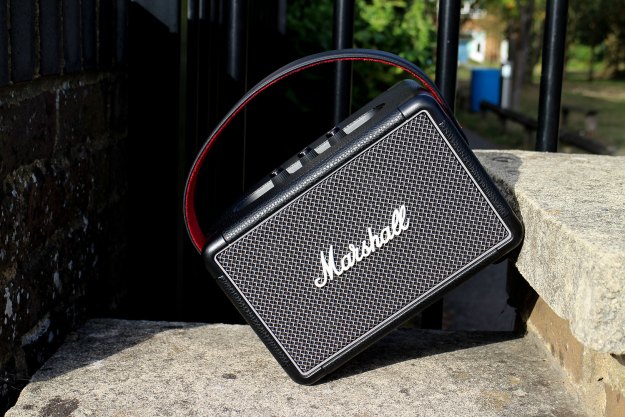 “The Marshall Kilburn II Bluetooth speaker is loud and proud, but still sounds sweet and balanced.”

The brand new Marshall Kilburn II Bluetooth speaker is sitting on the desk right now, playing a song I know really well, and I’m tempted to turn up the volume. Trouble is, there are other people in the house who may not appreciate a sudden blast of Nogizaka46; because the Kilburn II gets loud. Really loud.

It’s satisfying loudness too, as to reach ear-splitting level you twist a big button on the top. It’s coated in rubber for grip and has a delicate circular pattern with an equalizer-style position indicator on the top. Twist it until it stops, and unless it’s a party, someone will be banging on the wall and shouting, “Keep it down!”

Alongside the volume knob are two others, which independently control the bass and the treble. It’s wonderfully old-school, and the entire setup instantly makes you think of Marshall’s famous amps. The design of the Marshall Kilburn II does exactly the same. It’s a rectangular box covered in a soft-touch material that from a distance looks a bit like leather, while the front has a steel-colored grill with the iconic Marshall logo in the center. It’s less showy than the first Kilburn speaker, losing the brass plate on the top, the flick switch for the power, and the separate lamps and buttons for Bluetooth pairing.

Plastic end caps protect each corner — they were missing from the first version — and there are four sturdy rubber feet to keep it from slipping around. Turn it round and you’ll see an additional speaker grill and the bass port, plus an Aux input and the power plug. That’s not all, because although the Kilburn II is a large Bluetooth speaker, Marshall has given it a strap so you can carry it around. It’s not just any strap either. Like a guitar strap it has red felt on the underside, so you can pretend to be part of The Killers or whatever.

This is where the Kilburn II comes into its own. The monstrous volume level it produces means it’s perfectly suited to keeping people entertained outside. It’s a Marshall product, so it doesn’t shy away from producing plenty of bass, but not at the expense of quality and control. It’s very musical, especially at mid-level volumes, with a lovely balanced sound that we could tailor to our liking with the bass and treble controls.

Whack the volume right up, and twist the bass and treble controls round until they stop, and the Kilburn II does loose its composure, becoming harsh and distorted. But you won’t want to do this, as sensibly adjusting the bass and treble is all that’s needed for the speaker to still sound good at maximum volume. We enjoyed it most at half volume in a moderately sized room. The full sound matched with the Kilburn II’s funky styling made us smile.

Wondering how long the power cable will have to be to use the Kilburn II outside? Don’t worry, there’s a battery inside that’s good for at least 20 hours of playback before it needs recharging. It’ll need two-and-a-half hours plugged in before it’s ready for another outside excursion, but it’ll continue playing while plugged in. Alternatively, a 20-minute charge returns 3 hours operation. We’ve had the speaker going for a week, with use every day for at least an hour, and the battery meter shows there’s still more than half power remaining.

It gets better. The unit uses Bluetooth 5.0 with AptX, which means plenty of range — around 30 feet according to Marshall — and we could control it from the second floor of the house when it was in the yard. For the true party atmosphere, two devices can connect to the speaker at one time. We tried this with both an iPhone X and an Android-based Honor 10, and it connected without a problem, although you’ll have to come to an agreement about who plays what and when, as you can hijack playback just by pressing play.

It has red felt on the underside like a guitar strap — so you can pretend to be Rod Stewart.

The Kilburn II produces 3D stereo sound with front and rear tweeters, alongside a bass reflex system, with two class D amplifiers pushing 8 watts through each of the two tweeters, and a single 20-watt class D amp for the woofer. This is an increase over the Kilburn speaker’s power. All this, plus the substantial battery, means this is a big boy — nearly 10-inches by 7-inches by 5-inches — and it weighs about 6 and a half pounds. It’s definitely portable, but you won’t want to lug it about on a long hike. If you do, the speaker feels sturdy enough to take a fall, and it has an IPX2 water resistance rating to keep it safe in a very light shower.

We like the Marshall Kilburn II. It’s got musical guts, a surprisingly sweet and balanced sound that you wouldn’t expect from the styling, and the image given by the tattooed folk that regularly promote the brand’s products in ads. If there’s a problem, it’s the price. It’s a serious $300, or 270 British pounds. That’s $100 more than the Ultimate Ears Megaboom, our outdoor Bluetooth speaker pick, and almost twice the price of the Riva Turbo X, which tops our best Bluetooth speaker list. It’s also a little more expensive than the original Kilburn speaker.

If you’re struck by the style, and can’t wait to feel that red felt strap in your hand, you won’t be disappointed after spending your cash on the Marshall Kilburn II. It’s available to buy from August 30.