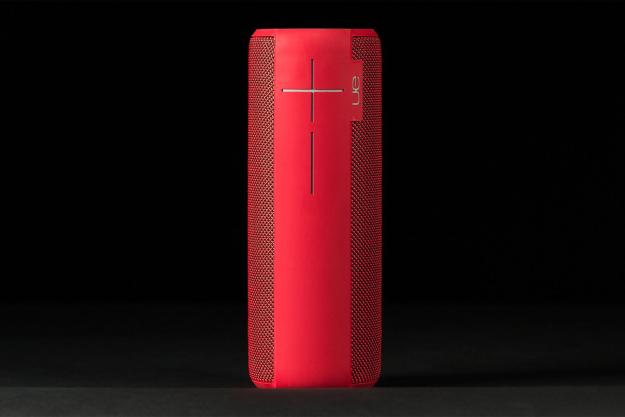 “If you’re willing to pay for the latest and greatest, the Megaboom is an impressive follow-up.”

What’s better than a wireless speaker that goes boom? How about one that goes mega-boom? Not so coincidentally, that’s the name chosen for Ultimate Ears’ follow-up to its popular Boom speaker, a funky cylinder of sound that grabbed a bunch of attention for epitomizing the big sound/small package proposition.

UE’s latest iteration aims to one-up its predecessor in every way, with a bigger size and sound, an updated app, longer Bluetooth range, and IPX7-rated water protection that allows for a full dunk in the drink for up to 30 minutes. Everyone knows a good sequel has to be bigger and better than the original, but at $300, the budget for the Megaboom treads into luxury portable Bluetooth speaker territory, currently occupied by the likes of Bang & Olufsen’s BeoPlay A2 and Bowers & Wilkins’ T7. Can the Megaboom compare favorably to the carefully-crafted competition from a pair of audiophile stalwarts? Let’s find out.

Product packaging may not win you any awards, but UE clearly understands it can have a powerful impact on how a product is perceived. Everything about UE’s line of portable speakers screams fun, from the boxes to the paint jobs, and the Megaboom is no different.

Everything about UE’s Megaboom screams fun.

The speaker comes in a large plastic drum with its picture plastered on the side and a handle on top for easy portability. While we appreciate the barrel design, it’s a little difficult to open.

Popping the lid reveals the vibrant speaker within, wrapped in a textured screen available in several colors. The speaker is accented with a heavy strip of rubberized armor, with UE’s trademark oversized volume keys carved into the top. Power and pairing keys sit in a pit at the top while the power and Aux ports rest on the bottom, guarded with flaps to keep the elements out. Along with the speaker you get a brightly colored charging cable and matching USB wall adapter.

UE might not have started the cylindrical speaker trend, but the Boom certainly popularized it, and now the Megaboom carries on that tradition. Its shape and driver configuration are designed to allow it to excel in virtually any position: You can set the speaker on its head or toe, roll it on its side, or even hang it from a tree, thanks to a sturdy metal clip that rests on the bottom.

Other speakers like the JBL Charge and Charge 2 borrow from a similar design, but the Megaboom might just be the most robust speaker in its genre. It feels tough enough for a drop from a considerable height – hell, you could probably use it as a weapon in a pinch. The speaker rises about 9-inches in height, with a diameter of a little over 3-inches, and fills that space with 2 pounds of mass.

The Megaboom also avoids placing any drivers or passive radiators at the end, expanding placement options. The four drivers it uses are instead set into the long surface of the speaker, and include dual 2-inch active drivers along with a pair of oval-shaped 2 x 4-inch passive radiator, extending the bass . While the Megaboom is designed to deliver a 360-degree soundstage, it also manages to offer a bit of stereo separation when faced head on.

And then there’s UE’s specially-designed Megaboom app. Like both the Boom and the smaller Mini Boom speaker, the app allows you to pair two Megabooms together, either for stereo pairing, or simply doubling up the sound. But at $600 for the two, that option only makes sense if you have a friend with the same taste in speakers. More useful are additions like the Alarm function that pulls tracks from your music library (which the Boom has added as well), and the 5-band EQ that allows for individual customization, or a choice of four presets.

Other Megaboom features include a powerful battery life of up to 20 hours, the aforementioned IPX7 rating for protection in almost any outdoor setting, and perhaps most impressive, a highly extended Bluetooth range that doubles its predecessor’s. We put the speaker’s Bluetooth range to the test, and it easily outclassed any other speaker we’ve tested (including the Sol Republic Deck) maintaining a strong connection at 75 feet and beyond with direct line of sight (no walls in the way).

The Megaboom is an extremely powerful speaker, with an impressively balanced and full sound signature that outpaces anything we’ve heard before from the company – that’s good, considering UE begs a premium for this speaker. But in spite of the sticker shock, we found ourselves really enjoying this device, rocking along to a product that has obviously been very well sculpted, and sonically tested to a T.

The Megaboom’s Bluetooth range is the best we’ve seen.

The Megaboom’s EQ feature is a welcome addition, but we didn’t really need it. The speaker does a fine job of keeping every instrument in line across a variety of genres, transitioning smoothly from the glistening synths of Daft Punk’s Random Access Memory, to the Beatles’ White Album without missing a beat. UE’s signal processing seems to accurately sense where the key frequencies lay, and accentuate them accordingly.

Bass response is especially impressive, not only for its heft, but also for its firm presence that keeps neatly out of the way of the upper register. The topside offers some excellent detail as well, ringing out lower percussion with authority, snare and acoustic guitar with a smooth and dry touch, and cymbal sustains with a powdery glow.

To get an idea of just how much talent lies within this little tower, we matched it up against our favorite Bluetooth speaker at the moment, the Bowers and Wilkins T7 ($350). From a sound quality perspective, the T7 was a clear winner for us, but the contest was no blowout. Both speakers do well arcing across the frequency spectrum, but the T7 adds that extra touch of nuance and dimension.

The guitar solo on Warren Zevon’s “Johnny Strikes Up The Band,” for instance, was crunchy and biting from both speakers, but it sounded more alive on the T7, rendered with more space around each note. Little touches in the vocals were exposed much more clearly by the T7, too, while the Megaboom tended to flatten the textures, and add a little more pinch to the topside.

That being said, we expected a bigger knockout from the T7 than what we heard. Further, the T7 definitely isn’t a good choice to accompany you to the beach, while the Megaboom could roll around under your blanket all afternoon, or fall into the muck while the tide comes in, with no ill effects. Based on sound quality alone, we prefer the T7, but if you’re the sort who frequently seeks outdoor adventure — and a capable speaker to provide the soundtrack — the Megaboom is an outstanding choice.

There’s only one thing we don’t like about the UE Megaboom: the price tag. $300 is a serious tax to pay for the kind of weatherproofing that’s really only necessary for the perpetual outdoor adventurer — or the terribly careless. If you’re not so sure you need to put the “mega” in your boom, you may just want to go for the original, which can now be stolen for around $180. Still, the Megaboom does represent an upgrade, so if only the best will do, the Megaboom should not disappoint.