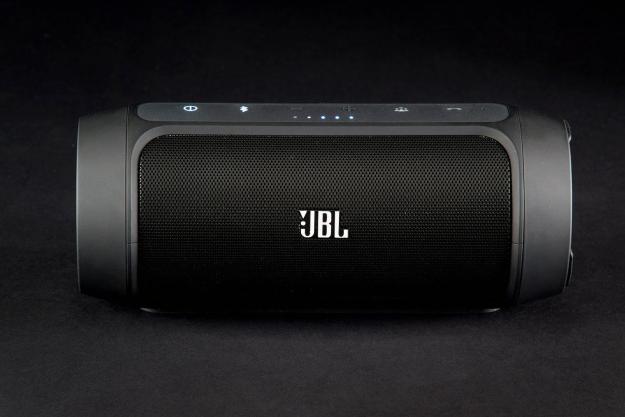 “With more power, a sleeker look, and class-leading bass, JBL’s Charge 2 is one sequel that’s well worth the ‘ticket’ price.”

In Hollywood, creating a sequel is a notoriously difficult burden to take-on, even for the most talented writer or director. Building off of a revered story with new energy and fresh perspective without sullying the original is a monumental task. As one of the audio industry’s most expansive and competitive genres, the same thing might be said for Bluetooth speakers.

So, when JBL set out to create a second take for its popular Charge portable speaker, the Charge 2, it did so by enhancing nearly every aspect of the original. That includes adding power, features, and perhaps most importantly, a double shot of passive radiators at the sides to improve bass response, all at the same $150 price point. Having greatly enjoyed the original, we decided to grab some popcorn and settle in to see if the Charge 2 could dig up similar thrills and spills as its predecessor, and maybe even offer a few more.

It’s no shock that the Charge 2 looks strikingly familiar fresh out of the box. However, a 360 tour around the cylinder reveals some notable differences, including sparkling silver caps at the sides that cover the newly affixed passive radiators, a few extra control keys along the rubberized top panel for the Charge 2’s enhanced feature set, and an exposed panel of ports at the backside.

Tagging along with the speaker is a slim accessory lineup, including a USB to micro-USB charging cable, a wall adapter, and some startup instructions.

Some subtle design changes in the Charge 2 give it a more sophisticated air than its predecessor. The grippy rubber is more tapered around the metal front screen, the crystal white LEDs have a futuristic look, and there’s no doubt the silver side panels buzzing with the bass make for a snappier aesthetic.

Like any good sequel, JBL juiced up the budget for the Charge 2.

We had some apprehension the new bling would make it tough to stand the Charge 2 on end like the original, but it’s still easy to go vertical with the speaker, though there’s obviously less bass response from the muted end.

Like any good sequel, JBL juiced up the budget for the Charge 2, adding multiple upgrades to the components. The Charge 2’s dual active drivers are just a touch bigger than before, at 45mm, or about 1.75-inches, up from 1.5-inches. The system also offers 50 percent more power, pushing 7.5 watts each to the active drivers. And perhaps most notable, those passive radiators at the sides allow the speaker to delve much further into the low frequencies, pushing down to a claimed 75Hz, as opposed to the 150Hz of the original.

The addition of an on-board speakerphone is an appreciated (and near-vital) new feature for the Charge 2 as well, and the button also acts as a universal key for play/pause and track skipping, alongside the volume, pairing, and power keys. But more intriguing is the speaker’s new Social Mode key, which allows up to three users at a time to connect via Bluetooth and share DJ duties, like Sol Republic’s Deck. It can be a fun parlour trick, and also works well for linking up both your tablet and phone simultaneously.

One thing some users may lament in the Charge 2’s new design is a bit less durability than the original. Thanks to the passive radiators, there’s no room for storing the inputs under a protective cap at the side. JBL chooses instead to leave the speaker’s inputs at the back of the speaker where you’ll find a charge port, a USB port for charging your smartphone, and a 3.5mm Aux input exposed to the elements. It shouldn’t be an issue for most situations, but it does make the Charge 2 less beach or rain ready.

Firing the speaker up, we were immediately welcomed by the same bright and punchy upper register found in earlier JBL portables, including both the original Charge, and the uber-affordable Flip. JBL adds a bit more bite than we usually go in for, occasionally revealing a tambourine clink or a trumpet blare too sharply, but it mostly works, airing out the topside with presence and clarity, like the sonic version of a sparkling summer morning.

As we eased into heavier tracks, it became increasingly apparent that the Charge 2 makes full use of its new passive radiator side cars, punching deep into the upper bass — and even a bit below. In fact, the speaker gets low enough to put it in contention for best in class in that regard. The new additions allow it to cut out surprisingly rich interpretations of difficult tunes like our go-to bass track “Before Your Very Eyes” by Atoms for Peace. The speaker served up the power below, balanced with ample clarity above.

Rock tracks and hip hop were also potently revealed with the aid of the Charge 2’s bass chops, exposed with surprisingly well-rounded sound for such a small device. We heard actual, honest-to-god bass guitar; rich and realistic revelations of those four bellowing strings, which is a serious coup at this level. From top to bottom, the Charge 2 showed off some of the fullest sound we’ve heard in its class.

Of course, an upgrade in technology doesn’t always provide a better experience — anyone who’s seen a Transformer sequel can attest to that. You can only cheat physics to a point, and the Charge 2’s beefed up bass occasionally comes at a price. To dig down low without distortion at this size requires some serious limiting by a DSP chip, which can have funny side-effects. Midrange instruments like guitar and snare were pushed around and leveled out in tracks like PJ’s “World Wide Suicide,” as bass and kick drum fought for dominance. The issue was present in other tunes as well, making us wish for a digital EQ at times — Spotify anyone?

On a few of our toughest test tracks we also heard just a smidge of rattle from inside, mostly accompanying stand-up bass lines. That said, the Charge 2 comes as close to conquering the physical limitations of portable speakers as we’ve encountered. Matching clear and present upper register detail with a robust and authoritative foundation, the Charge 2 creates the kind of full sound you’d expect from a speaker twice its size.

As we’ve seen year-over-year in the Bluetooth speaker genre, the competition has only gotten better since the original Charge was released. JBL obviously knows the terrain, and has made great strides to keep up with the crowd with the Charge 2. With more power, better features, a sleeker look, and class-leading bass, JBL’s Charge 2 is one sequel that’s well worth the ticket price.