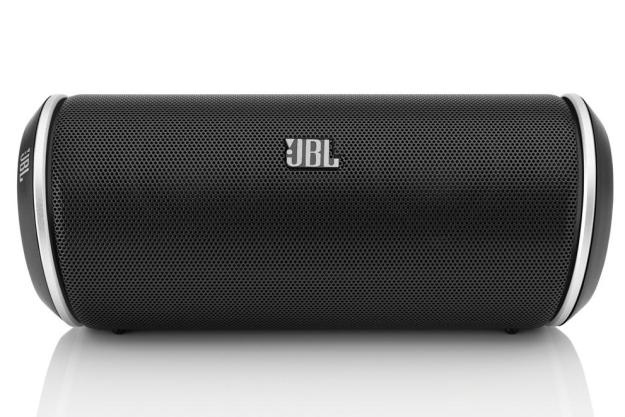 “Its clear dominance in sound and $100 price tag make it a serious contender for king-of-the-hill... Depending on how far you intend to travel from an outlet, the Flip could make a great choice.”

This product was reviewed as a portion of a bluetooth speaker round-up.

The award for Best Audio Performance goes to the JBL Flip. We could also have awarded the flip Most Original Design (or should we say only original design) for this roundup, as the sleek white cylinder is the only device in our line-up that breaks ranks from the other four strikingly-similar rectangular boxes.

The Flip easily established itself as the audio darling with a distinct sound signature marked by clarity, dimension, and powerful max volume. In fact, the Flip almost doubled the volume level of the rest of the field, and with no audible distortion. Though at first we found the Flip’s treble response a bit light, the speaker slowly grew on us, revealing an impressive amount of detail and timbre for its size. It’s 40mm drivers created a warm and full sound, rendering everything from horns to percussion with a depth that was unmatched by its rivals.

The Flip’s Achilles heel is its battery life, coming in at a paltry 5 hours. But, when you double the volume, you chop the battery life in half – that’s just how it goes. As such, the Flip was the only speaker we tested that didn’t last at least 10 hours. It’s also a bit light on extras compared to the competition, offering only an aux input, a mediocre microphone for hands free calling, and a neoprene carrying case. However, its clear dominance in sound and $100 price tag make it a serious contender for king-of-the-hill in our round-up. Depending on how far you intend to travel from an outlet, the Flip could make a great choice.