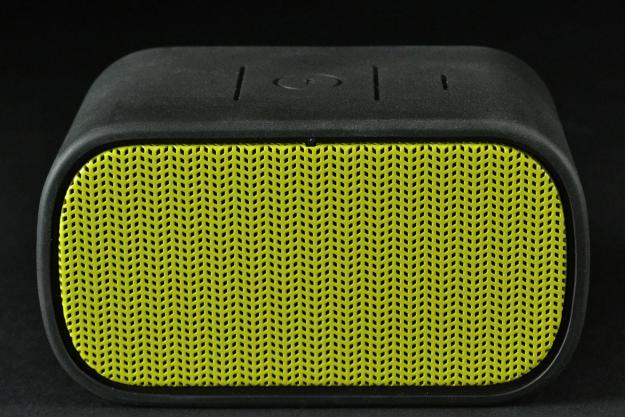 “At this size and price point, you’ll have a very difficult time finding a speaker that can outperform the UE Mini Boom.”

Until recently, Logitech subsidiary, Ultimate Ears, had an entire microsite devoted to one thing: the UE Boom Bluetooth speaker. This month, however, the number of items available on the site doubled as the popular tubular speaker got a baby brother, affectionately referred to as the UE Mini Boom. Aside from the wide variety of colors it is available in, the Mini Boom shares little in common with its sibling from an aesthetic point of view. But, what these little speakers do have in common is what UE refers to as “unexpectedly big sound” – hence the “Boom.”

Along with the promise of big power from a small package, the Mini Boom touts a durable housing and nifty features like the ability to wirelessly pair two units to create discrete stereo channels. Factor in a price point of around $100 each, and the Mini Boom looks primed to claim a nice chunk of space in a fiercely competitive portable Bluetooth speaker market. Still, talk is cheap – especially in the audio industry – and we had to find out for ourselves if the Mini Boom really did…well…boom. After some extensive listening, here’s what we discovered.

There isn’t much to the Mini Boom’s packaging. The speaker arrived in a rectangular, plastic display case, raised on its side atop a small cardboard platform. The little pod feels pretty heavy for its size. Sheathed in a tough layer of rubber polymer, the Mini Boom sports metal screens at the front and back and oversized buttons carved into the top side. The speaker feels solid in your hands, with a minimalist design that’s free from extraneous embellishments.

Inside the box’s platform was a single USB to mini-USB charging cable and a very basic start-up manual. The Mini Boom’s slender price point allows UE to get away with skimping out on extras like an AC adapter or carrying case without raising much ire. And while the printed instructions are brusque, the bulk of the narrative comes from UE’s Android or iOS app, which you are prompted to download immediately after pairing your device to the speaker – it is the 21st century, after all.

The Mini Boom’s rounded edges and rainbow of available colors give the speaker a touch of individuality, but at its core, it follows the standard, blocky design we’ve seen in countless other models, from the Jlab Crasher to the Bose SoundLink Mini. Still, it’s a proven formula, and the Mini Boom adds its own twists that give it some funky character while maintaining a seriously modest profile.

The speaker feels solid in your hands…

Carved into the speaker’s wide top side are two large volume buttons which flank a pairing button. At the backside are a small sliding power switch next to an LED charging indicator, a 3.5mm Aux in, and mini-USB charging port.

Audio is handled by twin active drivers at the front, which are approximately 1-1.5 inches in diameter. To beef up the low end, the speaker also incorporates a top-facing radiator plate that releases sound through a slit cut into the back of the speaker.

As mentioned, the Mini Boom is relatively well stocked with features, including NFC pairing, an onboard speakerphone, an extended Bluetooth range of approximately 50 feet (30 feet is the norm), the ability to pair with two devices, and, of course, its ability to wirelessly team up with a partner Mini Boom to double-team the sound. Battery life is estimated at 10 hours – about par for the course for a speaker of this size

Another of the Mini Boom’s notable features is its intuitive Android and iOS app. The app’s main role is playing matchmaker between two Mini Booms, creating either a dual mono set, or a discrete stereo pair. However, the app also harbors several other clever options. The ‘Learn’ tab gives you the full lowdown on all of the Booms functions, and the ‘Settings’ tab allows some nice customization options, including the ability to change EQ from three available templates, rename the speaker, and turn off a device’s alert tones so you don’t get interrupted by emails and texts while you’re jamming out.

We should note that you don’t have to use the app to partner up two Mini Boom’s to work in tandem. The process can be accomplished with just the hardware. To do it, you have to press the ‘volume+’ and ‘Bluetooth’ keys on one speaker, then double tap the ‘Bluetooth’ key on the other, which initiates streaming.

True to UE’s claims, the Mini Boom pulls off some of the most powerful sound we’ve heard from a speaker of its size, out-blasting most competing speakers we’ve evaluated, with a few exceptions like the JBL Flip (which is a bit larger). On top of that, the junior Boom provided a pleasantly thick and warm midrange matched by a clear and agile top end – a combo that made for some extremely enjoyable listening.

One of our favorite aspects of the Mini Boom’s sound is its aptitude for creating a full, rich display of percussion. Snare drums, toms, and even kick drums came through with a deep punch, giving some surprising gravitas to the sound. A prime example came early on in our evaluation when Cake’s “When You Sleep” popped up on shuffle. As soon as we heard the full crushed thud of the snare and the deep, heavy tom rolls, we knew we were in for a good ride.

…the Mini Boom pulls off some of the most powerful sound we’ve heard from a speaker of its size.

Sailing through a sea of genres from our catalog, the little tyke represented its namesake admirably, not only bringing the ‘Boom’, but also providing detailed representations of the entire instrumental lineup, cutting from the low mids far into the upper treble with brash confidence.

Electro pop tracks like Radiohead’s “Feral” from The King of Limbs were vividly defined. The speaker drove the slick and static-y lead groove of the song with a full touch that reached far deeper than what we expected from such little drivers. Yet it had no issue downshifting to classic rock, belting out “Sympathy for the Devil” with good presence in the myriad percussion tracks, a clean, funky timbre to the walking bass, and a violent crunch to Keith’s overdriven electric guitar.

The bass got a little overzealous at times, and when we pushed the speaker into the red, it tended to shuffle in a comical dance on our countertop. But we rarely heard more than a hint of distortion, even while letting the speaker loose at full volume. And we were surprised at the amount of bass the device was able to kick out when bumping artists like Snoop Dogg and Jay-Z. While the kick drum never got into the sub 100Hz zone, the Mini Boom offered a satisfying representation of the deepest hits that went beyond the tinny, half-hearted effort we hear from so many competitors.

Wirelessly pairing the speakers provided some impressive results as well, though we’d relegate it to more of a cool addition than a primary way to listen. Spreading the speakers approximately 10 feet apart and stepping back, we were introduced to a wide stereo image, with an impressive level of power. There were even some hints of upper and lower dimension in the soundstage, displaying a saxophone in the lower right, or a tinkling of the ivories in the upper left. In fact, the sound was so big, we found ourselves expecting more bass and a richer sound, as if we were listening to shelf speakers, as opposed to a team of tiny portables.

The only real issues we encountered during dual pairing mode were a few occurrences of Bluetooth dropout, which wasn’t ever a problem we noted when using a single speaker (though its range topped out at around 40 feet or so in our street tests as opposed to the promised 50).

We also had to deal with a shifting of the center image in dual mode as the speakers rumbled out of position from bass vibrations. The movement was bad enough that we considered sticking a weight on top of the speakers to stop them from squirming under the pressure. Other than those slight issues, we were impressed with the performance of our dual mini monitors.

With innovative features, a warm and detailed sound signature, and reams of power, UE’s Mini Boom makes a strong pitch as the new leader in the entry-level portable speaker category. At this size and price point, you’ll have a very difficult time finding a speaker that outperforms the Mini Boom, let alone two of them paired together. Those looking to stay around the $100 mark for a portable sound solution would do well to place UE’s Mini Boom towards the top of their list.