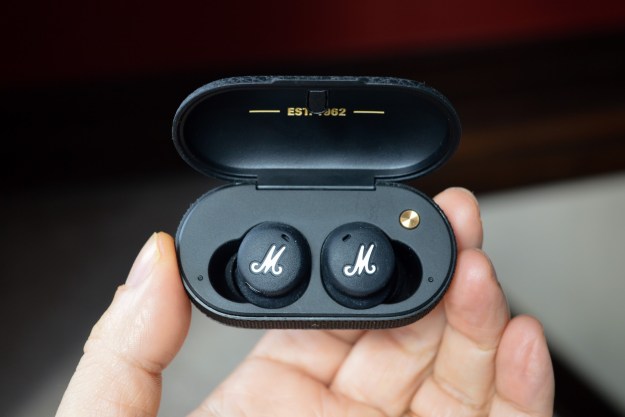 “If you like it loud, the Mode II kick out a huge amount of sound.”

Marshall’s personal audio division has made some great headphones and wireless speakers over the past few years, but it has waited until now to venture into the insanely competitive true wireless earbuds category with its $179 Mode II. Was it worth the wait for Marshall fans? Let’s take a look.

Inside of the small, all-cardboard box, you’ll find the Mode II earbuds inside their charging case, four sizes of silicone ear tips (mediums are installed by default), a USB-C charging cord, and some quick-start documentation.

The charging case features the same amp-inspired textured black plastic as the Marshall Emberton speaker, complete with the Marshall script logo, while the earbuds simply get the stylized “M.” In a sea of unremarkable black plastic earbuds, the Mode II stand apart with a retro-cool that only the Marshall brand can deliver.

That dedication to style even finds its way into the USB-C charging cord which is much longer than you typically get with a set of wireless earbuds, and it’s designed to look like an electric guitar patch cord — very cool.

I could leave the Mode II in my ears for hours without becoming fatigued.

Both the earbuds and their wirelessly charging case are remarkably small and lightweight. At just 44.5 grams in total, they make for a lighter package than both the AirPods Pro and the AirPods with wireless charging.

The earbuds themselves have a very low profile which lets them sit nearly flush with your outer ear where they won’t interfere with either hats or helmets.

But don’t let the petite dimensions worry you; the Mode II are solidly built and their case will easily protect them from minor mishaps or encounters with other objects if you carry them in your purse. They can also survive your sweatiest workouts courtesy of an IPX5 rating. Even the case carries an IPX4 rating — virtually unheard of in the true wireless world.

The Mode II’s small size makes for a very comfortable yet secure fit. More than most true wireless earbuds I’ve tried, I could leave the Mode II in my ears for hours without becoming fatigued.

Marshall has done a great job with the touch controls. If you’ve read my other earbud reviews, you know I’m generally not a fan of this type of control, preferring the accuracy of a physical button instead. But the Mode II hit that perfect balance of being just sensitive enough that you don’t have to repeatedly tap them, yet not so hair-triggered that accidental touches become a problem.

Even better, successful touches are confirmed with a subtle but audible feedback tone, which I think should be standard practice for all touch-controlled earbuds.

The Marshall Bluetooth app can be used to see the remaining battery life, adjust EQ and transparency modes (more on that later), but it doesn’t let you customize the controls. Included gestures let you manage play/pause, track skip forward/back, call answer/end, voice assistant access, and transparency on/off, but there’s no way to control the volume, for which you’ll have to use your phone.

Marshall lives up to its promise that the Mode II are “in-ear headphones that are built for loud.”

The Mode II are equipped with wear sensors, but curiously, Marshall limits their functionality to just auto-pause. In other words, when you remove an earbud, your music pauses automatically, but when you reinsert it, you’ll need to resume your tunes manually with the appropriate touch gesture. I’d really like Marshall to address this shortcoming with a firmware update, and give us the ability to disable it entirely from within the app.

You can use either earbud on its own for phone calls or music. Using the right earbud alone gives you track control, while the left will let you speak to your phone’s built-in assistant.

The Mode II come tuned from the factory with the “Marshall Signature” EQ, a bold and punchy mix that favors bass. It works with a wide range of musical genres, from the acoustic sounds of jazz ensembles to the full-on electric studio work of Beck or Daft Punk. Stereo imaging is vibrant and creates good width and depth for the soundstage.

That signature sound is comparable to both the AirPods Pro and the Jabra Elite 75t, but the Mode II offers slightly better clarity, with upper registers that are more distinct.

If the signature sound isn’t for you, the Marshall app lets you create two of your own custom 5-band EQ presets. In playing with these, I found I could significantly de-emphasize the bass, which some listeners may prefer. You might also want to try reducing the highest frequencies — the default EQ has a tendency toward sharpness and sibilance, which can get a little tiresome, especially if you’re listening at higher volumes.

Speaking of higher volumes, Marshall lives up to its promise that the Mode II are “in-ear headphones that are built for loud.” They get very, very loud indeed — dangerously so, in fact. I found that even at about 40% volume, I had reached my own personal limit for comfort.

If your phone has a built-in ability to reduce loud sounds (as most iOS and Android devices do), I strongly recommend you keep it engaged, with a maximum of 85 dB set as the threshold. Noise-induced hearing loss is no joke, and you should take precautions to keep the Mode II from running at their maximum.

The silicone ear tips help the Mode II achieve a very good seal in your ear, which effectively keeps out external noise. A single tap on the left earbud engages transparency mode, letting you hear more of your environment.

There’s no quick-charge option, so when you run out of juice, it takes two hours to fully charge them in the case.

You can tune the amount of transparency in the Marshall app, but even at its maximum setting, the feature favors sounds that are farther away instead of those that are close. It’s good for maintaining better awareness of your surroundings for times when you’re near traffic or other hazards. It’s less effective at making your own voice sound natural for phone calls or conversations — you’ll still be aware of a certain muffled quality to these interactions.

Battery life is acceptable at five hours per charge for the earbuds, with an additional four charges in the case, for a total of 25 hours. These specs are almost identical to Apple’s AirPods. That’s more than enough battery life for a full day of use, but unfortunately, Marshall hasn’t included a quick-charge option, so when your earbuds run out of juice, it takes an hour to fully charge them in the case. That could be frustrating for travelers who suddenly find themselves out of power on a long flight.

You can see the remaining charge level of the earbuds in the app, but you’ll need to rely on the case’s front LED to figure out where it’s at in terms of juice — though with a green/orange/red color scheme it’s not quite as precise.

Given that the Mode II don’t have active noise cancellation (ANC) and thus have fewer microphones than ANC models, I wasn’t expecting particularly good call quality, but the Mode II are great for calls. Wind noise can still overpower your voice, but if conditions are reasonably calm, these earbuds do a very good job of letting your voice be heard clearly and with a minimum of compression.

They switch into transparency mode automatically when the mics are engaged, which is handy, but as I observed above, this doesn’t entirely remove the muffled sound of your voice in your own ears. Nonetheless, I think the Mode II are going to be decent for most types of calls.

While not as fully-featured as similarly priced true wireless earbuds, the Marshall Mode II deliver big, bold, (and loud) sound, in a tiny and stylish package that fans of the Marshall brand are sure to enjoy.

Marshall’s iconic style is utterly unique, but for the same price or less than the Mode II, you’ll find plenty of excellent alternatives including:

Marshall backs the Mode II with a one-year warranty. They appear to be very well built and their IPX5/IPX4 rating should help them withstand years of use. If you charge them regularly you can expect their battery capacity to drop over time.

Yes. The Mode II come with a premium price for the Marshall name, but they’re stylish, they sound great, and they’re very portable.

Best headphone deals: Save on Beats, Bose, and Sony
The best soundbars 2022: which should you buy?
Spotify Wrapped 2022: what it is and how to view it
Spotify Wrapped 2022 is here: What’s your ‘listening personality’?
The best TVs of 2022: our favorites from Samsung, LG, Sony, and more
These are the wireless earbuds I’m taking on a beach vacation
The best TV shows on Amazon Prime right now (December 2022)
Best new movies to stream on Netflix, Hulu, Prime, HBO, and more
The best noise-canceling headphones for 2022
The best new shows to stream on Netflix, Hulu, HBO, and more
The best wireless headphones for 2022: Which should you buy?
The best romantic comedies on Netflix (December 2022)
Best headphones for 2022: Sony, Bowers & Wilkins, and more