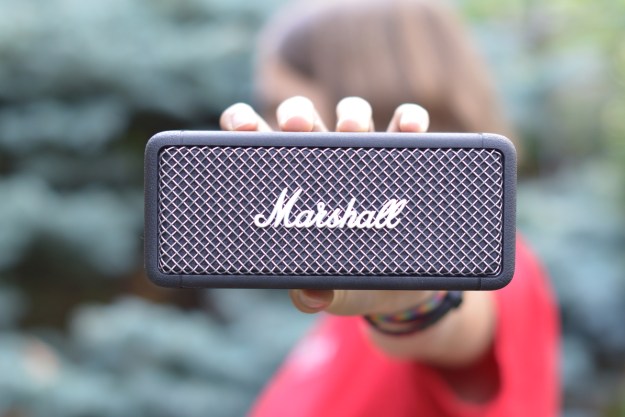 There are so many Bluetooth speakers now, with so little to differentiate one speaker from another, Digital Trends has had to take a step back from reviewing every new model — there simply isn’t enough time to tackle that gargantuan task.

But we’re always keeping our eyes open for Bluetooth speakers that manage to set themselves apart from the crowd.

The Marshall Emberton ships in a simple cardboard box, and with the exception of a tiny piece of polyethylene wrap to protect the speaker, the packaging (and included paper documentation) is easily recyclable.

Inside, you get the speaker and a four-foot USB-C charging cord — which is longer than most.

Marshall designs all of its Bluetooth speakers to look like miniature versions of the famous U.K. guitar amps that bear the distinctive Marshall logo, and the Emberton is no exception.

Despite the fact that the Emberton is Marshall’s smallest speaker to date, the company has managed its proportions perfectly.

Whether sitting on a dorm room bookshelf, a kitchen counter, or on a patio table, this speaker has miles of authentic rock ‘n’ roll style.

With its silver diamond-mesh speaker grille, and heavy, black rubberized body, the Emberton looks like it ought to have a guitar input jack somewhere (sadly, it doesn’t).

What it does have is a single gold-tone control pad, an LED power meter, and a Bluetooth pairing button. A USB-C charging port on the right side panel is the only input, and it’s strictly for power, not playback.

The back panel isn’t a panel at all – it’s another speaker grille. This is your first clue that the Emberton isn’t quite like most of the other Bluetooth speakers you’ll find on Amazon.

At 24.6 ounces, it’s got some serious heft to it despite its diminutive size. That’s likely a result of the battery Marshall has used, but it also gives the Emberton a feeling of real substance.

I like that even though you can comfortably carry it in one hand, it doesn’t look or feel like a toy.

In staying laser-focused on its mission, the Emberton is effortless to set up and use.

One small critique: Like many other ultraportable speakers, the Emberton could have benefited from a carry handle or strap of some kind. I realize this would have taken something away from the amp-inspired look, but sometimes function needs to win over form.

Controls, connections, and ease of use

The Emberton, much like it’s massive big brother, the Tufton, does one thing, and one thing only: It lets you connect a single Bluetooth source, like a phone or tablet, and play your favorite tunes.

It won’t charge your other devices, it won’t act as a speakerphone, you can’t talk to Siri or Google Assistant, and you can’t connect a non-Bluetooth device like an older iPod via an auxiliary input.

Yes, these would all be handy things, but in staying laser-focused on its mission, the Emberton is effortless to set up and use.

Simply select the Emberton from the available Bluetooth devices in your phone’s control panel and you’re good to go.

From there, open your music app of choice (or a video app) and start playing.

The Emberton’s control pad handles all of the essentials: Play/pause, track skip forward/back, and volume up/down. Like a well-designed game controller, the pad’s action is smooth, effortless, and tactile, with a silent but discernible click for each command.

There are two features I wish it had: Multi-speaker pairing for doing stereo across two speakers … and Bluetooth multipoint.

The 10-segment LED power meter gives a quick yet very accurate sense of how much juice is left, which I much prefer to other systems that use voice feedback or force you to consult your phone.

As much as I don’t mind the Emberton’s focus on just being a great Bluetooth speaker, there are two features I wish it had: Multi-speaker pairing for doing stereo across two speakers (or simply multiple speakers), and Bluetooth multipoint so that you can pair two Bluetooth sources simultaneously.

JBL has been offering multi-speaker on its products for some time, and it’s a great way to affordably enhance what a portable speaker like this can do.

The Marshall Emberton is rated IPX7, which means you can pretty much do as you please in terms of water exposure, including full immersion as long as you don’t force it too deep under the surface.

But the X in IPX7 means that it is not rated for dust and debris, so as much as the Emberton might be an ideal poolside pal, I don’t recommend it for the beach or anywhere else it might be exposed to a lot of small particles.

Marshall doesn’t make any claims as to the Emberton’s ability to survive a drop, but judging from its thick rubber hide and protected corners, I’m guessing it will handle minor mishaps effortlessly — and maybe even a few major ones, too.

Most portable Bluetooth speakers offer a battery life of between 10 and 12 hours. To get substantially more, you’re looking at spending at least $150 — which, not so coincidentally, is what you’ll pay for the Emberton.

How can I suggest that the tiny, battery-powered Marshall Emberton provides room-filling sound? Because it does.

It can run for 20 hours on a full charge, and a 20-minute quick charge will buy you another five hours.

We use the term “room-filling sound” fairly liberally when discussing speakers. When it’s a product like the Sonos One, Bose Smart Speaker 500, or the Pantheone I, that term applies in spades. So how can I also suggest that the relatively tiny, battery-powered Marshall Emberton provides room-filling sound?

Thanks to its stereo drivers, each driven by a dedicated 10-watt amplifier for 20 total watts of power, the Emberton is capable of a truly surprising amount of sound.

But it’s not just loud — it’s large. Place the Emberton at the front of your listening space and it will belt out an admirable balance of lows, mids, and highs. This is something that other Bluetooth portable speakers struggle with, especially at louder volumes.

The JBL Flip 5 can get louder than the Emberton, but as it climbs toward its maximum setting, bass and treble march away from each other, leaving the midrange a barren desert.

The Emberton, by contrast, does a much better job of preserving sound quality, never distorting or becoming painfully sharp. At the same time, you get a genuine feeling of warmth from this little black box — another area in which portable speakers typically come up short.

Its stereo separation isn’t perfect — there is, after all, about four inches or less between the drivers — but it’s pretty decent. Much more remarkable is its ability to push sound evenly around a space.

The best way to appreciate this is to sit the Emberton in the middle of a room, or even better, in the middle of a patio. With its double-grille openings, it comes close to delivering a 360-degree sound field and virtually guarantees there isn’t a bad seat in the room (or backyard).

While $150 is on the pricier end of the spectrum for a highly compact Bluetooth speaker like the Emberton, it delivers the goods when it comes to sound quality and battery life, and it’s hard to put a price on Marshall’s iconic guitar amp style.

I’ve yet to find a $150 portable speaker that matches the Emberton’ts unique combo of style and sound, but, for the same price, the Ultimate Ears Boom 3 is definitely worth a look. It doesn’t do stereo and its battery only lasts 15 hours, but its 360 speaker design sounds terrific, it is beach-ready with dust resistance, and it can be put into party mode, to sync up with Ultimate Ears’ other Bluetooth speakers.

Zounds Industries — the company that licenses the Marshall name for consumer audio products — provides a one-year warranty on the Emberton, which is fairly standard for these kinds of devices. But given how well-built the Emberton is, I expect you’ll get many years of use from it, even as the built-in battery gradually loses its ability to last the full 20 hours.

Yes. Despite some of its limitations, the Marshall Emberton is a great-sounding and great-looking portable Bluetooth speaker with exceptional battery life.

Topics
The best headphones for running in 2023
The best Dolby Atmos soundbars for 2023
The best subwoofers you can buy in 2023
OnePlus Buds Pro 2 to support Android’s new spatial audio feature
The best HDMI cables you can buy in 2023
The best speakers for 2023: great hi-fi options for music and more
The best Blu-ray players for 2023
Why the Nest Hub Max still rocks as a kitchen TV
Stream live sports without cable with Sling — now 50% off
Should you mount your TV above a fireplace?
Walmart has a 50-inch TV deal for under $200 today
Disney Plus Free Trial: Can you watch for free in 2023?
Super Bowl 2023 halftime show: who’s performing?