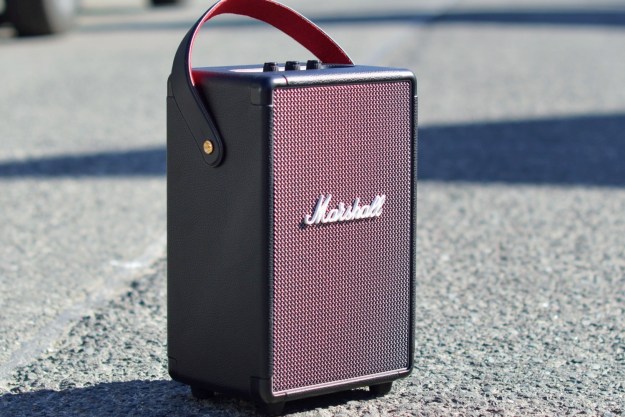 “A consummate party speaker, the Marshall Tufton belongs at your next get-together”

If you want a really good Bluetooth speaker, there are lots of great choices out there — and even more if you’re not that picky. Most of these speakers are on the small side, emphasizing personal yet portable sound. If you want something with a bit more oomph — a Bluetooth speaker that can power an entire patio party as easily as it can provide mood music at home, your choices are much more limited.

One of those choices is the Marshall Tufton, a $400 Bluetooth speaker that makes no apologies about its primary mission: It’s a serious party machine that walks a fine line between power and portability. Given its hefty price tag and some very capable competitors, is it the right Bluetooth speaker for your next get-together? We put it to the test to find out.

The Marshall brand is, of course, best-known for its iconic guitar amps and speaker stacks that have festooned the stages and garages of the music world for decades. When the U.K. brand entered the personal audio space, it naturally kept that look and feel, lending an authenticity to its products that few other companies can claim. I’ve always liked the look, but on smaller products like headphones, it lacks the same commanding presence of the live music gear.

That’s why I love the Tufton. As a big Bluetooth speaker (it stands over a foot tall) it’s able to embrace that Marshall design heritage in a way few other Marshall personal audio products can. From its diamond crisscross metal grille emblazoned with the cursive Marshall logo to its textured cabinet surfaces and top-mounted knobs,  it’s the closest thing you can get to an actual Marshall amp. Several people who saw me with it asked if it was a small guitar amp.

I’m also a big fan of the internal AC adapter. You shouldn’t need to lug a big power brick around with you when head out, and the Tufton doesn’t make you. A simple and easily replaced 2-prong power cord is all you need.

Those classic Marshall design cues aren’t just cosmetic. The Tufton is big, heavy, and very solid. At just over 10 pounds, you won’t want to carry this beast long distances, even though the leather-like removable strap is ideally suited to doing so.

One gets the impression you could take the Tufton almost anywhere and it would survive just fine.

That weight is the result of four separate amps powering four separate drivers, a battery, a built-in AC adapter, and what appears to be some very heavy-duty materials in the cabinet walls.

With corners protected by rounded plastic endcaps and a set of solid rubber feet, one gets the impression you could take the Tufton almost anywhere and it would survive just fine. It even has a small amount of water protection: An IPX2 rating means you don’t need to fear the occasional encounter with rain — just don’t make a habit of it, and definitely try not to spill your beer all over it.

Do one thing and do it well

Everything about the Marshall Tufton points to the fact that it is a speaker first, foremost, and exclusively. You can choose between Bluetooth (with aptX if your device supports it) or a 3.5mm line-in connection on the back panel, but that’s it for bells and whistles. You won’t find a USB port for playing tunes from a thumb drive or for charging your phone. There’s no microphone to turn the Tufton into a big speakerphone.

For those who long for a simpler time without sacrificing today’s conveniences, the Marshall Tufton is a dream come true.

You won’t even find the play/pause button that has become almost universal in the Bluetooth speaker world. What you will find are three old-school knobs for power/volume, bass, and treble. They turn with a perfect degree of resistance. I don’t know if there’s anything truly analog happening under the surface, but Marshall has done such a good job of mimicking the feel of a genuine analog speaker, I find I just don’t care.

Pairing the Tufton with your device couldn’t be easier. If the speaker doesn’t enter Bluetooth pairing mode when you first turn it on, simply press and hold the dedicated Bluetooth button for 3 seconds and the speaker will appear in your Bluetooth devices list. Tap it and you’re done. The same button lets you switch to using the line-in input.

Marshall only claims 30 feet of wireless operation for the Tufton, but I was able to walk over 100 feet from the speaker outdoors and the tunes kept playing from my iPhone 11.

The Tufton’s rechargeable battery is good for a claimed 20 hours of use, and from what I can see, that’s about right — though expect to get less than that if you’re making use of its full volume.

For those who long for a simpler time without sacrificing today’s conveniences, the Marshall Tufton is a dream come true.

In keeping with the Tufton’s visual similarity to Marshall’s live music equipment, its audio chops are best appreciated in wide-open spaces. It’s able to get remarkably loud. Loud enough to make any neighbors you didn’t invite very aware of what a good time you’re having. It does this without a hint of distortion or unwanted cabinet vibration all the way up to its maximum setting.

With 80 watts of total power, it simply gets louder and sounds better at those higher volumes than the Sonos Move.

With bass and treble knobs set to the midpoints, the Tufton creates a good balance of lows, mids, and highs. The bass is as full and commanding as you would expect from a cabinet of this size fitted with a generous reflex port for air movement. But that bass never overwhelms and can be easily tweaked to your liking using the bass knob. Vocals are clear and distinct, and the Tufton manages to keep them from becoming harsh at higher volumes, something lesser speakers often fail at.

Thanks to the dedicated rear-firing full-range driver, the Tufton has an admirable amount of 360-sound coverage. The front sounds better for sure, but not by as much as you’d think just by looking at it. Unfortunately, this arrangement doesn’t do much for stereo separation. Not that a single speaker will ever excel at doing stereo — especially one that is a tall rectangle — but it’s something to keep in mind.

I compared the Marshall Tufton to the similarly priced and similarly equipped $399 Sonos Move. Both are designed to go on the road and power big, open spaces with lots of full-range sound, but the Tufton totally eclipses the Move when outdoors. With 80 watts of total power, it simply gets louder and sounds better at those higher volumes than the Sonos.

When you take these two wireless speakers inside, the script is flipped. The Sonos Move, with its built-in AutoTrueplay EQ system, has a deeper and wider soundstage than the Tufton. This is noticeable when both speakers are using Bluetooth, but it becomes even more pronounced when you switch the Move to Wi-Fi and feed it a lossless audio source like Tidal’s HiFi tier of streaming music.

Jazz standards from artists like John Coltrane and Miles Davis are allowed to breathe through the Move in a way that the Tufton, with its more directional and closed design, simply can’t manage.

Is this a deal-breaker? Hardly. But prospective Marshall Tufton buyers should know they’re getting a consummate block-rocker, not a precision instrument for critical listening.

With tons of portable power and a no-nonsense design that oozes rock and roll authenticity, the Marshall Tufton is a badass Bluetooth party speaker you can take anywhere. As long as you don’t expect this classic muscle car of a speaker to sound like a home hi-fi system, it’s going to impress those who want to thrill a crowd.

There are several excellent alternatives to the $400 Marshall Tufton, including the $399 Sonos Move and the $400 Ultimate Ears Hyperboom. Each has its strengths: The Move is a chameleon that switches between hi-fi home wireless speaker and party mode with ease, while the Hyperboom is a bass-heavy beach and pool companion with plenty of ports. But neither possess the Tufton’s raw power or its retro charm, which we think puts it in a class of its own. To get a more capable crowd-pleaser, you’ll need to look at heavyweights like the $900 Soundboks 2.

The Marshall Tufton looks very well built and I expect it should last a very long time if you don’t abuse it. The manufacturer’s warranty is only one year, which is less than some (Logitech provides a two-year warranty for the Hyperboom). Still, the biggest constraint on the longevity of Bluetooth speakers is the battery. The Tufton’s is not user-replaceable, which means once it’s done, it’s done. It’s worth noting that the Sonos Move’s battery is user-replaceable.

If you take pride in being the person who always brings the tunes, the Marshall Tufton is your Bluetooth speaker. It sounds great and looks amazing. If you’re OK with its almost Spartan lack of features and relatively expensive price, I think you’ll be very happy indeed.