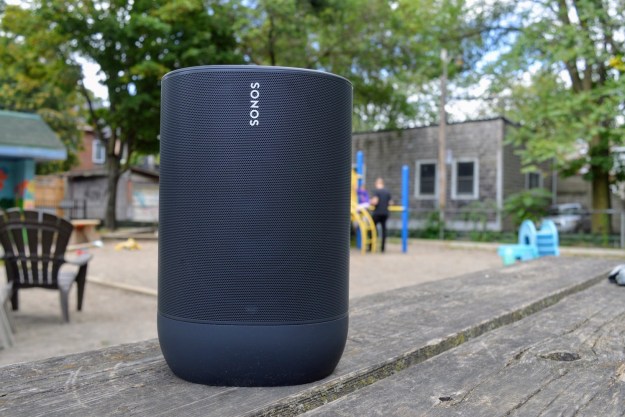 “Built to go anywhere, but just as happy at home, the Sonos Move may be the only speaker you need.”

Sonos has been the leading brand in wireless whole-home audio since the company effectively created the category almost 20 years ago. But in all that time, it has steadfastly refused to support Bluetooth wireless connections on its devices.

Only Sonos knows all the reasons why the company held back, but that chapter is now closed. The company’s first truly portable (and Bluetooth-capable) $399 Move is here. The only remaining question is, given the considerable investment it requires, is the Move worth it?

Sonos products have a reputation for superb build quality, and whether we’re talking about a Sonos One SL (formerly the Play:1) or a Sonos Sub, each speaker feels solid and substantial. The Sonos Move takes this even further. It weighs 6.6 pounds, making it over two pounds heavier than a Sonos One, and nearly twice the weight of the Ultimate Ears Megablast, a portable speaker that has many of the same features.

Still, thanks to its well-designed integrated carry-handle, you can carry it from place to place without much fear of dropping it accidentally. The included charging base essentially disappears with the Move in place, which is ideal and provides additional stability.

Thanks to its carry-handle, you can take the Move from place to place without fear of dropping it.

Not that the Move needs it. Despite a rounded base that looks like it wants to roll the Move onto its side at any moment, a low center of gravity plus a very grippy rubberized bottom lets the Move lean at some surprisingly precarious angles without falling over. Even if it did (I did not intentionally drop or roll the Move) Sonos assures us the speaker would continue functioning perfectly, though no promises were made about denting the black metal grill. And unlike so many other built-for-the-elements speakers, the Move’s understated design still looks great sitting on a coffee table or in a bookshelf.

In June 2020, Sonos announced that in addition to the Move’s debut matte black finish, a new matte-white color will be added. This brings the Move in-line with the rest of Sonos’ other black and white products like the Sonos One SL, Sonos Five, and the new Sonos Arc soundbar.

That robustness extends to the Move’s ability to deal with the inherently variable conditions of being outdoors — in fact, it’s a big part of the speaker’s appeal. With an IP56 rating, the Move should be able to withstand deserts and beaches alike, and if you take it to the snowboard terrain park, it should do just fine there too.

I did none of that with the Move. Instead, I subjected it to a small patio get-together, sat it beside our cats’ dusty litter box for 24 hours, and then ran it under a tap to clean it off. You would never do any of that with a regular Sonos speaker, but the Move handled it all effortlessly.

The ability to survive in the face of water, dust, and the occasional spilled beer is one thing, but a portable speaker needs to sound as though it was only built for one thing: Great audio. Indoors, the Move compares favorably to Sonos One or Play:1. It creates a slightly wider soundstage, and bass is more pronounced, but there’s also a corresponding muddying of the midrange. It’s the kind of thing you’d only notice if you placed a Move right next to one of those other models and then obsessively switched back and forth between them while playing everything from The Offspring to Adele. Not that I did that, of course.

Take the Move outside and only one thought comes to mind: This thing rocks.

Take the Move outside, though, and all other thoughts but one melt away: This thing rocks. Even at less than 50% volume, I ran the risk of drawing unwanted attention from neighbors several doors down the street. The expanded soundstage that was noticeable when indoors magically continues to expand when outdoors. We have a pair of Klipsch AWR-650-SM landscape speakers powered by a Sonos Amp in our garden. They sound fantastic. But if the Move had been available, we could have bought two of them, saved ourselves considerable dough, and ended up with a much more flexible solution for outdoor music. For a lot of folks, a single Move will be more than enough speaker for even the wildest pool parties.

I’ve said it before, but it bears repeating: Sonos’ decision to make the Move’s rechargeable lithium-ion battery user-replaceable is worthy of high praise. Sonos claims the cell is good for three years or 900 charges, after which you can swap out the battery for a new one. The battery is good for a claimed 10 hours of constant use at medium volumes. I think this is pretty accurate, but I had a different experience when the Move was in standby mode. It’s supposed to stay that way for up to 120 hours, but I found that when I abandoned it with a 40% charge remaining, it warned me through an audible tone that it needed to be plugged in after only 12 hours.

On June 16, 2020, along with the announcement of the new white color option, Sonos also announced that the Move’s battery life is being upped to 11 hours via a software update.

The Move is designed to be recharged via USB-C when you don’t have the charging cradle handy, but be warned: Not every USB-C charger will work. The Move requires a charger that can output one of these three voltage/amperage combos: 12V/3A, 15V/3A, 20V/2.25A, and it’s highly unlikely that the charger that came with your phone is compatible. You don’t want to make this discovery in the middle of a road trip, with the Move’s front LED blinking an angry orange at you to let you know it’s not happy.

Hey Google, can you say Bluetooth, Wi-Fi, and AirPlay 2?

The Sonos Move is a lot of things: A portable Bluetooth speaker with 10-hours of battery life, a Wi-Fi speaker with AirPlay 2, and a smart speaker with your choice of Alex or Google Assistant onboard. The Move gets all of them right. Switching between Wi-Fi and Bluetooth modes is as easy as pressing the dedicated mode button on the back of the speaker. Amazingly, Bluetooth sounds very close in quality to Wi-Fi, proving the point that the single biggest factor in perceived sound quality is the speaker, not necessarily the source.

I still preferred listening over Wi-Fi indoors, but frankly, in the places where Bluetooth will be called upon, it’s more than sufficient. Sonos claims that Bluetooth wireless range on the Move is superb, and though that’s true outside, indoors it had just as much trouble staying connected to my phone as I roamed our multi-level house as other BT products I’ve tested, which is to say, it did not like being separated by more than one floor.

Sonos needs to find a way to let the Sonos app maintain operational control of the Move when in Bluetooth mode. Needing to fire up a third-party app like Spotify, Apple Music, or Tidal just because I’m away from home doesn’t feel right. I like the Sonos app experience and one day I hope it will be the only experience I need, regardless of the color of my wireless connection.

I did experience a bit of difficulty getting Google Assistant setup on the Move, but I have a feeling that was because I was already using GA on another Sonos product in my home. Removing GA from the system entirely and adding it back in got everything working correctly. Once Google was up and running, it performed flawlessly, responding to all of my commands both generic “Hey Google, how do I make a mojito?” to the specific, “Hey Google, play Los Lobos in the living room,” very quickly. The microphone array on the Move has so far proven more sensitive than that of the Sonos One, picking up my commands across the room when speaking quietly, and even whispered when just a few feet away.

Is it truly Trueplay?

That same mic array is responsible for one of the Move’s more intriguing features: Auto Trueplay, or the ability to optimize its own EQ settings based on where the speaker is located. In the Sonos demo, last August, a spokesperson shifted the Move from a wide-open living room space to a tiny cubby hole, and indeed, Auto Trueplay adjusted itself to improve the sound.

Perhaps I wasn’t subjecting the Move to acoustic changes as extreme as those in the demo, but I didn’t notice a whole lot of EQ adjustments from place to place. I found myself wondering if Auto Trueplay, with its dependence on local acoustic feedback only, could be as effective as Trueplay done from a smartphone mic located away from the speaker. Unfortunately, there’s no way to test this. If you disable Auto Trueplay on the Move, you do not get manual Trueplay as an option.

At $399, the Sonos Move isn’t as affordable as some had wished the company’s first Bluetooth speaker would be. It lacks a few Bluetooth bells and whistles like a speakerphone and Bluetooth stereo-paring, and you can’t use the Sonos app when in Bluetooth mode. When indoors, it sounds only somewhat better than a $170 Sonos One SL.

Still, with its ability to fill any backyard or pool party with tunes, easy switching between Wi-Fi and Bluetooth, and handy smart-speaker integration, for some Sonos fans, it will be the ideal companion and possibly the only Sonos product they need.

We’re beginning to see a big increase in the number of speakers that are portable, smart, weatherproof, and able to work on Bluetooth as well as Wi-Fi networks. Many of these are less expensive than the $399 Sonos Move. Of these, the $349 Bose Portable Home Speaker is the closest in design and features. It’s not quite as powerful as the Move, but it’s a good bit lighter and its carry handle makes it a better companion for longer hikes. Here’s our head-to-head comparison of these two excellent portables. But one thing none of these competitors can do is connect to a Sonos system. For Sonos owners, that makes the Move unique.

All Sonos products come with a one-year warranty, but this is not an indicator of longevity. Sonos speakers have always featured impressive build quality and the company goes to great lengths to test its products for durability. With its user-replaceable battery and top-notch construction, we expect the Sonos Move will have an excellent operational life-span.

Yes. The Sonos Move delivers superb portable sound in a package that can survive just about anything you can throw at it.