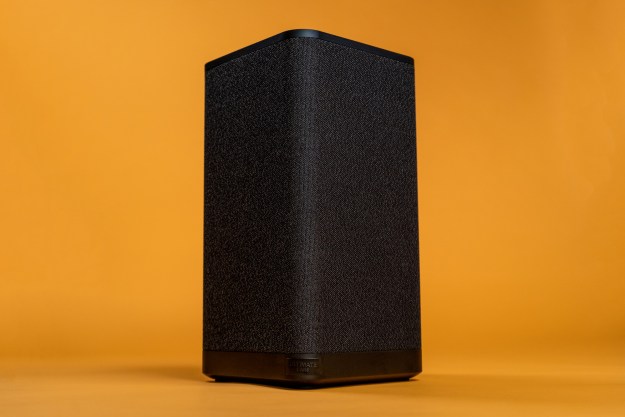 “The Hyperboom will be the life of any party.”

It takes moxie for a company to move on from a product that’s become a signature of the brand. For such a shift to be justified, the change must be necessary to meet the desires of fans. That’s what the Ultimate Ears Hyperboom achieves.

Ultimate Ears‘ Hyperboom is a massive Bluetooth speaker, and a departure from everything Ultimate Ears has produced so far. The Hyperboom is built to completely fill your home with music, a contrast from the quality-on-the-go mantra of its predecessors.

In many ways, when the $399 Hyperboom arrives in early March, it will represent a leap of faith for UE, catapulting them into a different class of speakers with new competitors and challenges. Luckily, Ultimate Ears has landed on its feet with an impressive new product.

The UE Hyperboom surprised me at first glance. I knew I’d have a new UE product in for review, but details beyond that were scarce. I was anticipating a speaker similar to the Megaboom 3, a two-pound, cylinder-shaped unit designed to grab and go. But at a whopping 13 pounds, the huge Hyperboom was a super-sized surprise.

There’s a reason for the bigger footprint. At a briefing on the speaker, Ultimate Ears’ Global Product Manager Doug Ebert said his team extensively researched how UE speakers were being utilized by customers. Often, he said, they were used inside at home in a party setting. They worked, but often lacked the level of sound needed to truly drive a fiesta.

From that, the UE Hyperboom was born. The sleekly crafted device arrived tucked in its own Styrofoam manger, with a small cardboard insert containing a charging cable and a quick start guide. You don’t need that guide, though, because as soon as you set the speaker down and press the power button, a clear voice directs you to download UE’s accompanying app and follow the setup instructions.

The actual setup was easy, as it should be. It consisted of pairing my mobile device with the Hyperboom via Bluetooth and allowing the appropriate permissions. The app also prompted me to set up my launch music (I’ll get to that later) by linking services from Amazon, Deezer or Spotify. Easy-peasy.

The Hyperboom is technically portable, but you won’t be going far. Ebert said it was designed to be “home, and home adjacent,” and my experience affirmed that. The Hyperboom, while hefty, can be moved from room to room, or out to the backyard to provide barbecuing tunes. However, I don’t recommend hiking with it.

Most of its weight comes from the drivers packed into the 14-inch tall rectangular cabinet. The Hyperboom has a pair of 4.5-inch woofers, a pair of 1-inch tweeters, and two passive radiators, each bigger than one of UE’s earlier products, the Boom.

There’s a lot going on atop the speaker: a power button, a microphone for UE’s adaptive equalizer, the standard UE volume buttons, a series of buttons for switching between sources, and what UE dubs the “Magic Button,” a one-touch music control that lets you launch playlists as well as play, pause, and skip tracks. Down the backside of the speaker are several inputs including a 3.5mm jack, an optical audio input, a USB port for charging mobile devices, and a charging port for the speaker itself.

The Hyperboom also offers the ability to toggle between two connected Bluetooth devices, in addition to the aux and optical inputs.

I enjoyed the ease of use, as I was able to leave the house, come back, and resume the playlist I was listening to without reaching for my phone.

My biggest issue, as is the case with most Bluetooth speakers, occurred when my music was interrupted by phone calls throughout the day. Honestly, it’s fine when I’m by myself, since the music needs to die down so I can take the call anyways. But in a livelier atmosphere, with other people around, it’s annoying.

That brings me to the one feature missing. The Hyperboom does not have Wi-Fi. Granted, none of the previous Boom speakers had Wi-Fi (UE’s Blast models, however, do), but for a $400 speaker aimed at home listening, the lack of Wi-Fi is a puzzling omission. Wi-Fi can offer better sound quality and eliminates the problem of phone calls interrupting a jam session.

The Hyperboom does offer 24 hours of battery life, depending on how loud you play (I saw a full day of moderate-to-loud playback without charging). It also has an IPX4 rating that protects against spills and splashes, and the ability to link up to other speakers in the Boom family. These all align with its mission of semi-portable tunes. It’s easy to place the Hyperboom in a room and not worry about it all day.

The Hyperboom sounds good. Really good. Songs like the Zac Brown Band’s Jolene or Pink Floyd’s Wish You Were Here let the Hyperboom showcase its ability to elegantly glide through different frequencies and tones. It isn’t audiophile-grade quality by any means, but it made for a fun listening experience.

The Hyperboom shined brightest when playing tracks with a considerable low end. UE says the Hyperboom can reach down to 45Hz, and I was pleasantly surprised to hear it consistently dig that low in tracks like Rodeo by Lil Nas X. I felt it, too, after moving the speaker from my open living room to a tighter office. Logic’s Everyday and Schoolboy Q’s Collard Greens gave me a familiar flutter in my chest. This speaker can rock you. Literally.

UE uses the speaker’s microphone to measure the room it’s in and tailor its EQ towards the surroundings. Likely due to this, I didn’t notice a significant drop in quality when moving from different rooms in my house to the backyard, other than an expected dip in the low end in an open-air environment.

The app also has a customizable EQ to adjust the sound to your liking, and presets specialized for cinema, podcasts, and bass boosting. The podcast setting drowned out low frequencies, which was a nice help when listening to voices like Dax Shepard’s low growl on Armchair Experts.

I didn’t spend a ton of time with the Hyperboom connected to my TV. It was fine. Just don’t expect it to be able to produce what a soundbar or a home theater system could. This speaker is focused on music.

In a showdown, I pit the UE Hyperboom against a Sonos Move I had handy. Despite the obvious size disparity (the Move is lighter at 6.61 pounds and stands just under 10 inches tall), the pair are identically priced at $399.

The Hyperboom outperformed the Move in bass-heavy songs; the Move just couldn’t push as much air as the larger Hyperboom. But, low end aside, the Move emerged as a clear winner with a more detailed, refined sound to my ears.

Which you’ll prefer comes down to what you need. The Sonos Move is more refined, but the UE Hyperboom is better for larger spaces and parties.

The Ultimate Ears Hyperboom has a two-year limited hardware warranty.

The UE Hyperboom is a big speaker, and an even bigger step for the brand. Just about everything about this speaker, from its assortment of features to its roof-raising sound, is designed to take the household Bluetooth landscape by storm. Even without the Wi-Fi, competitors may want to batten down the hatches.

Though they may not have previously been direct competitors, UE and Sonos seem to be shooting for the same corner of the market with the Hyperboom and Move, respectively. For those looking for Wi-Fi capability, multiroom functionality, and smart home control, the Move would be an appealing alternative.

Currently at $285, the Riva Festival is another solid-sounding speaker hovering in the same price range as the Hyperboom. But make no mistake. For the money, UE is providing premium performance with the Hyperboom.

UE’s family of Booms have proven to be some of the more durable Bluetooth speakers available, and while the Hyperboom isn’t quite as outdoor friendly, I’m confident in saying this will be another speaker engineered for longevity.

Yes. Despite its Wi-Fi deficiencies, the Hyperboom delivers some of the most dynamic sound we’ve heard from a Bluetooth speaker, and it’s sure to be the lifeforce behind any party.