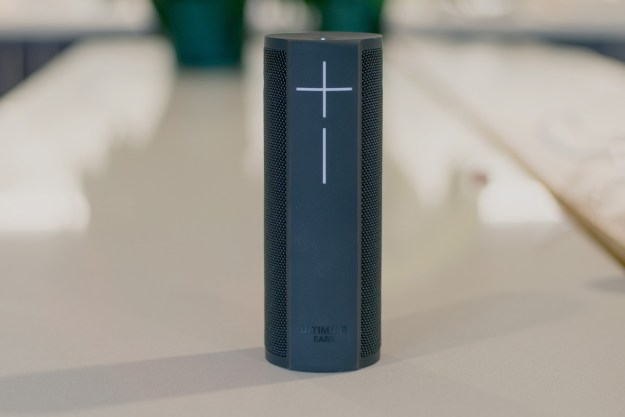 “UE’s Blast speaker explodes onto the scene with clever new tricks up its sleeve.”

Here at Digital Trends, we’re unapologetic fans of Ultimate Ears. The Californian company makes solid speakers with cool names (not to mention some spectacular earphones from its Pro division); see the Boom 2, the Wonderboom, and the Megaboom. Notice a trend?

Cut to this fall when UE decided to upgrade the “Boom” line to something more combustible: The $230 Blast and the $300 Megablast, which tweak an already-successful formula by adding far-field microphones and support for Alexa, Amazon’s know-it-all digital assistant. How do they fare? We spent some time with the Blast, and it’s… explosive, to say the least.

We appreciate when a manufacturer pays attention to the little things. UE’s packaging is both fun and informative; an outer sleeve depicts the Blast in its natural habitat (a swimming pool, naturally) and outlines the speaker’s features, while the box inside is splashed with colorful, abstract art reminiscent of a San Francisco street mural.

The hinged box splits down the middle to reveal the Blast itself on one side – our review model was Graphite gray – encased in the typical black foam, with a small compartment containing product literature and charging components on the other. Another small success: Ultimate Ears was nice enough to include both a wall charger and a (reasonably long) charging cable. Lots of companies eschew the wall cube altogether.

Like the Boom 2 before it, the Blast is cylindrical, featuring a woven exterior capped with rubber on the top and botton (as well as a strip along the side, where UE’s trademark giant volume buttons reside). In fact, the Boom 2 and Blast are nearly the exact same size, measuring at just over seven inches tall and 2.6 inches across. This time, though, UE sharpened the speaker’s edges, giving it an air of class, especially in gray. It feels like we’ve reviewed ten million speakers with the same shape, but the Blast still makes a distinct impression.

It feels like we’ve reviewed ten million speakers with the same shape.

On top, there are two buttons – power and Bluetooth – and the power button doubles as an LED indicator for Alexa activation. In theory, it’s cool, but in practice, you need to be extremely close (or in a dark room) to see when Alexa can hear you. On the bottom, there’s a threaded insert for mounting the speaker (nice!), which also works as an insert for UE’s Power Up charging dock.

To charge the speaker directly, you can pry up the rubber cap on the bottom, but putting the port on the bottom of a cylindrical speaker is shortsighted (and likely intended to push people to buy the $40 dock), in our opinion. The Blast’s got a 12-hour rechargeable battery, which never came close to running out during our testing. As with every other UE speaker, the Blast is IPX7 rated for waterproofing.

Interestingly, UE decided to ditch the PartyUp multiroom functionality that the Boom speakers came with. It’s not a big deal, considering how powerful the Blast is, but it’s a bit of a head-scratcher nonetheless.

Setting up the Blast isn’t Sonos-simple, but it’s pretty dang easy. You’ll need the Ultimate Ears app – not the Boom or Megaboom or Roll app, mind you – which you’ll use to connect the speaker to Wi-Fi. Once that’s done, it’ll need to log into your Amazon account to activate Alexa, then will offer you a three month free trial of Amazon Music Unlimited (if you don’t subscribe already). After that, you’re all set; if you don’t have Wi-Fi access, you can always just turn the speaker on, connect via Bluetooth, and start jamming.

We won’t lie – we were pretty stoked to find out that the Blast and Megablast support Alexa via voice control. Some of our favorite speakers use Alexa, and in the right hands she can do lots of cool stuff. For now, though, Ultimate Ears’ hands are wrong.

Alexa can only play music from three services right now – Amazon Music, TuneIn, and iHeartRadio – which means fans of Spotify, Apple Music, or any other platform will need to go the Bluetooth route instead (UE’s website says Pandora, Deezer, and more are on the way). When actually using Alexa, there’s a short delay before she answers, and as we mentioned before, you can’t tell if she’s listening without looking at the top of the Blast.

Further, we didn’t find Alexa’s microphone to be very accurate; unlike the JBL Link 20 and Amazon’s own Echo, the Blast doesn’t record your voice first to give Alexa an idea of what you sound like. In practice, this means you have to enunciate very clearly to get her to understand you, and when the speaker is playing loudly, she often can’t even hear you.

Ambient noise (like other voices or TV audio) can get in the way when trying to issue commands, sometimes overwhelming Alexa and rendering her inert until you restart the speaker. The same issue can occur when switching between music played via Alexa and music played via Bluetooth; the speaker seems to get confused, and Alexa will stop listening for commands altogether. She also can’t make phone calls, though we didn’t necessarily expect her to be able to.

Luckily, once you start pumping tunes out of the Blast, you’ll likely forget any Alexa-related misgivings and revel in its glory. Despite its modest size, the Blast gets very loud – so loud, in fact, that you will not want it at max volume in the shower (trust us). Even at higher volumes, though, we rarely noticed any distortion, as the speaker reproduced a variety of music with impressive clarity.

Once the Blast starts pumping out tunes, you’ll revel in its glory

In Pharrell Williams’ Hunter, funky guitar riffs bounce smoothly atop falsetto croons, while the singer’s voice finds sublime purchase among frantic violins and vocoders in the chorus of Gust of Wind. Feeding the speaker Travis Scott’s Pick Up The Phone, meanwhile, we were impressed by how clearly Young Thug’s breathy wails appear (well, to an extent) above synthetic marimba and steel drums. Crowded affairs like Rage Against The Machine’s Take The Power Back sound great, balancing soft cymbal clicks against Zach de la Rocha’s staccato raps and a Seinfeld-esque bassline. The UE Blast never gets muddled up by busy recordings, and maintains its clean integrity across the entire frequency spectrum.

Softer compositions sometimes revealed some slight signal processing, but not always; piano segments in Camila Cabello’s Havana sounds a bit garbled, but Paul Simon’s Diamonds on the Soles of Her Shoes comes through beautifully, with every instrument presented in pure harmony.

We were surprised and impressed with the speaker’s stereo imaging; listening to Rezonate’s Rebirth, we felt positively encircled by sound (though there’s a slight dead spot directly in front of the speaker if you’re too close). Even outside, the Blast sounded great, easily cutting through ambient noise. The Blast never reached Riva Arena levels of audio fidelity – it didn’t resolve 320 Kbps tracks with as much fidelity — but it sounds seriously good compared to most similar speakers.

UE was also kind enough to provide us with a Power Up charge pad, as mentioned. The circular pad performed as advertised, keeping our Blast juiced up at all times.

The Blast is covered for defects in materials and/or workmanship for a period of two years. To submit a warranty claim within 30 days following purchase, contact the retailer from which the speaker was bought.

We came in expecting to be impressed by the Blast, and that’s what happened. Aside from a few Alexa-related hiccups, the speaker performed wonderfully, filling rooms with sound clearly and effortlessly. It’s not the best smart speaker we’ve ever used, but it looks awesome and sounds even better.

If you’re really invested in a smart economy, there are better choices, given the Blast’s spotty microphone. Sonos’ $250 One needs to be plugged into power, but it sounds phenomenal and offers superior Alexa support. If you prefer Google Assistant, JBL’s $200 Link 20 might strike your fancy.

If you value audio quality over voice control, try the $250 Riva Arena, which also boasts a 20-hour battery (though the Blast looks a lot cooler, in our opinion).

Physically speaking, the Blast feels rock solid, and it’s waterproof. It should last a few years, minimum, and will likely only give out because the battery runs its life out.

Yes. The Blast simply sounds excellent. There are lots of options out there, and people will have different preferences, but we certainly recommend it to anyone who wants a versatile, stylish speaker.

Topics
Best Bluetooth speaker deals for January 2023: Save on JBL and Sony today
What is aptX? Cutting through the clutter of Qualcomm’s codecs
Ultimate surround sound guide: DTS, Dolby Atmos, and more explained
What are Bluetooth codecs and do they really matter? The wireless audio tech fully explained
The best headphones for running in 2023
Amazon adds audio personalization to Echo Buds 2
Bowers & Wilkins’ wireless earbuds get better battery life and longer range
NAD’s CS1 adds wireless streaming music to any audio system
The best Bluetooth speakers for 2023: Marshall, Sonos, JBL, and more
Beats Studio 3 headphones are $120 off today at Amazon
Best 4K projectors for 2023
The best ultra short throw projectors for 2023
How to watch Puppy Bowl 2023