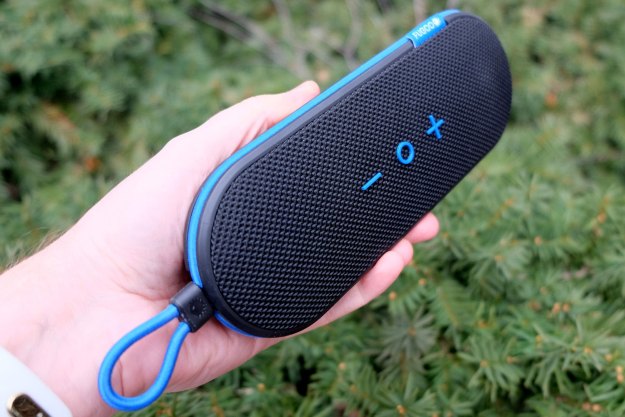 There are plenty of Bluetooth speakers available, but not all of them are ruggedized to withstand the elements. More outdoor-ready models are springing up, though, and Fugoo is taking its design to a more portable standard.

The new Fugoo Go speaker is really an offshoot of its previous designs, only it cuts down on a few things to lower the price point and make it easier to take along with you, hence the “Go” name. Pairing two of them allows for stereo with left and right channels, while the solid build means they can take a beating in the outdoors.

Having started out as a Sam’s Club-exclusive, the Go is packaged exactly like something that would come out of that store: There’s a big cardboard frame with bubble pack housing the Go in the center. Not that there’s much else to throw in there. Aside from the USB charging cable and a one-sheet startup guide, there’s nothing else to unbox.

The Go does look like a Fugoo product, mainly because it sticks to a similar design philosophy. The trademark playback and volume buttons are laid out on the front grill, while the power and Bluetooth buttons are at the top. A small compartment on the back protects the micro-USB port, and unlike other models, there’s no aux-in jack for wired inputs.

The Go is the smallest product in the Fugoo lineup (there’s also the Style, Sport, and Tough Bluetooth speakers), and just a hair lighter than its brothers, though all four speakers weigh just about a pound. The Go is 453 grams, the Sport 538, and the Style 461; the sturdier Tough weighs 1.4 pounds (643 grams). Gutting some features and components probably helped lose those last few grams: The regular Fugoo models have six drivers, whereas the Go has four. A smaller battery means the Go lasts a quarter as long as its predecessor, and there’s no microphone to allow for calls or accessing Siri and Google Now.

We dangled it over the neck of a shower head and it worked perfectly.

The regular Fugoo speakers have a neat conceit: “jackets” that let you switch into Style, Sport, or Tough mode depending on what the day holds for you. But even without one, the Go has solid rigidity to it, and the company says it’s sandproof, mudproof, snowproof, dustproof, shockproof, and waterproof. (To protect it from potent rum drinks, would it need to be overproof-proof?) Fugoo says it can stay underwater down to 3 feet for no longer than 30 minutes. Shockproofing protects from drops of about 5 feet high at the most.

The built-in mounting cord (which comes in black, blue, or red) adds some flexibility in where to place the speaker. We dangled it over the neck of a shower head and it worked perfectly. We left it outside in the cold, hooking it over a lamp or the corner of a railing and securing it in place by tightening the slack. The back plate, where the Fugoo logo is, acts as a mounting socket for accessories. We didn’t get to test any, but the company says some are on the way.

Orientation is supposed to be pretty universal. Naturally, the Go wouldn’t be placed face down, but it can sit face up, on an angle or even vertically hanging from its cord.

The Go immediately goes into pairing mode when powered on, making it easy to connect with a phone or tablet. For the Go, Fugoo added the ability to pair two speakers simultaneously, toggling between double and stereo mode. Double mode mirrors playback to both speakers, whereas stereo separates them into left and right channels.

Controls are pretty straightforward, too. The included startup guide notes how to skip tracks and get quick feedback on specific points. Holding the main circle button for five seconds adjusts the EQ. Pressing the battery button will trigger a voice announcing the current level. Pressing the Bluetooth and minus buttons toggles between double and stereo modes when two speakers are paired together.

It takes a little time to memorize all of the controls, but it’s nice to see that Fugoo packed as much as it could into the limited inputs. From a safety standpoint, the most vulnerable piece on the speaker is the micro-USB port nestled inside the back compartment. If water were to leak into the internal components, it would be through there. Thankfully, it was built to squeeze pretty tightly, making it unlikely that it would simply flip open upon contact.

Reducing the number of drivers inside shows when the Go is pushed beyond its default volume level of 50 percent. The other Fugoo speakers can go loud with an obvious tipping point that roars in the distortion, and the Go follows that pattern. The good news is that it can be quite loud for its size, easily filling a small area by the pool or on the beach. Where it has to compete with ambient noise, it can more than hold its own.

The Go continues to play after being splashed with water or subjected to other elemental abuse.

Highs and mids have decent range, with lows coming in reasonably well, albeit more muted than we’ve been accustomed to with other Fugoo speakers. Again, it’s an understandable trade-off, given the lack of punch inside, but bass lovers may find too much has been sacrificed. Those who simply want music to sound decent without having to put on a pair of headphones will probably like how loud it can go before distortion starts muffling things.

When two speakers are paired together, particularly in stereo mode, the enhancement is noticeable. That’s not surprising because each speaker doesn’t have to work as hard to produce the same fidelity. Spatial separation is obvious from the start, but the way the audio spectrum filters through remains unchanged, meaning the lows don’t get a boost from that kind of setup.

The fact that the Go continues to play after being splashed with water or subjected to other elemental abuse is always easy to appreciate. Hanging or hooking it up to play in unusual places, like the showerhead or off a door handle, only extends the usability. We could see backpackers or campers loving that, because the speaker wouldn’t have to be laid on a flat surface to do its thing.

Fugoo’s battery life is rated at 10 hours at 50 percent volume, and in our testing, that was more or less accurate — but since you’ll raise the volume often, your actual experience will definitely be lower than that. Still, for a portable speaker that can take a licking, we can’t complain about that too much. Next to the 40 hours the original Fugoo could manage, it may seem like a big difference though.

Fugoo offers a one-year limited warranty for the Go for any defects out of the box from the date of purchase. It doesn’t cover damage suffered from exposure to the elements or a nasty fall. There is a 30-day “no hassle” money back guarantee allowing for a full refund for any reason.

Fugoo has been focused on making speakers tough enough to play music just about anywhere, while withstanding weather conditions. The Go falls right into that, and at a cheaper cost than other speakers from the company. It’s a pretty good deal at $100, but even at that price, we could only justify it if we were looking to play music outside most of the time. That said, it’s fine for indoor use, and we got a kick out of hanging it in the shower, so the versatility is certainly appreciated.

Like a Spaniard running with the bulls, the Go plays in crowded territory. The Sony SRS-XB3 is a similar concept with stereo pairing, albeit without the same level of ruggedness, but it’s some of the best sound available at its price point. The JBL Charge 3 is another stand-alone waterproof speaker that works with double the battery life, and not that much more money. The UE Boom 2 is about $50-$100 more, but it offers better sound, and Alexa integration. And if you like really big sound, you can link with up to 50 other Boom 2 speakers at once.

Reliability really depends on how rough and tumble you are with it. The Go’s ruggedized body is sort of like a built-in insurance policy for basic clumsiness and exposure to the elements. And Fugoo has proven it can build quality speakers with good internal components, so we wouldn’t expect the drivers to blow out from loud playback, either. The cord is also surprisingly durable, and we could see some creativity in mounting the speaker with it in a variety of ways.

Yes. If you’re looking for a speaker you can trust to keep playing in sand, snow, rain, on the beach, at the pool, and wherever else, you’ve come to the right place.

Topics
How to watch Super Bowl 2023
The best QLED TVs for 2023: bring on the brightness
BluOS will be updated to 4.0 with a fresh look, new features
The best Bluetooth speakers for 2023: Marshall, Sonos, JBL, and more
Beats Studio 3 headphones are $120 off today at Amazon
Best 4K projectors for 2023
The best ultra short throw projectors for 2023
How to watch Puppy Bowl 2023
Samsung accidentally reveals price of its 77-inch QD-OLED TV
The best OLED TVs for 2023: from LG, Sony, and Samsung
The 50 best movies on Netflix right now (January 2023)
The best movies on Amazon Prime Video (January 2023)
The best new shows to stream on Netflix, Hulu, HBO, and more