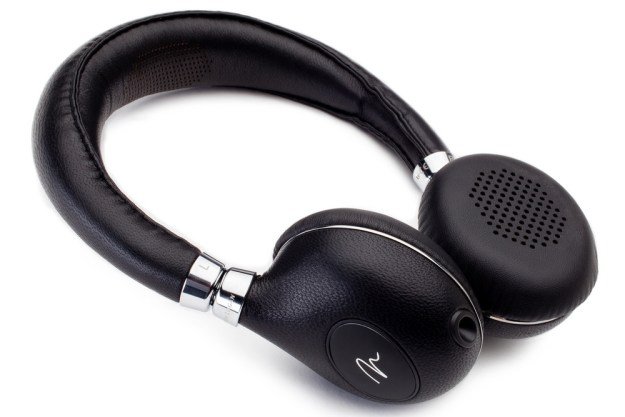 “Martin Logan successfully imports its signature approach to treble to the Mikros 90, and it is a treat for the ears.”

Martin Logan has been exploring all sorts of new avenues lately. And so far, we’ve enjoyed what’s come of these new ventures. A company that’s built a reputation on a line of somewhat pricey electrostatic speakers, Martin Logan recently introduced a new breed of speakers and sound bars that blend planar tweeters with dynamic drivers. We reviewed the Motion LX16 bookshelf speakers and Motion Vision sound bar, and both impressed us with a generous taste of Martin Logan’s signature flavor of treble while also delivering clear, open midrange and impressively deep and tight bass.

Martin Logan makes just two models of headphones: the $150 Mikros 70 in-ear and the $300 Mikros 90 on-ear, reviewed here. Whether intentional or not, by limiting its headphone line-up, it’s as if Martin Logan is saying that these two headphones represent its sound exactly as it had hoped. Or maybe that’s just wishful thinking on our part, because if the Mikros 90 sound anything like the company’s speakers, we’ll be very pleased indeed. Let’s find out.

When you’re charging $300 for a set of headphones, it helps to soften the blow a bit by dressing them up in pretty packaging. Martin Logan does this in stlye, delivering the Mikros 90 in a heavy gauge, glossy black box that even smells classy – like cracking the lid on a brand new pair of Italian leather shoes.

We found the Mikros 90 tucked inside their black oval case with a detachable 4-foot cable featuring an in-line 3-button microphone, a ¼-inch adapter and a short manual. The case feels solid and the zipper is the oversized sort you might expect to find on a quality piece of luggage.

As we took the Mikros 90’s in, we were reminded a little of the Bowers and Wilkins P3 and Harmon Kardon CL. Though the three actually differ quite a bit on closer inspection, they all exude the same sort of classy, executive look from afar. The only thing is, the Mikros 90 will set you back $100 more than the P3 or CL.

There’s a lot to appreciate about the Mikros 90. We like the robust feel of the headphone assembly, the heavily padded headband and ear cups, and the supple leatherette material that covers most of the headphones with just a few chrome accents. Classy.

The Mikros 90 employ the increasingly popular practice of stretching a sheet of perforated leatherette tightly over the ear pads. On the other side of the perforations lay the Mikros 90’s 35mm drivers.

The headphones’ 4-foot cable is sheathed in leather, with a three-button microphone on one end and a 90-degree 3.5mm plug on the other. The cable doesn’t feel as sturdy as the headphones do, and we think a cloth-covered cable would have been a nice touch as well.

The Mikros 90 exert a much higher than average amount of clamping force. This may have been done intentionally in an effort to ensure a complete seal on the ear and enhance noise-isolation, but we found the squeeze to be a bit much after just 15 to 30 minutes of use. If you’re sensitive to on-ear pressure, you probably won’t enjoy this aspect of the headphones. We consider ourselves pretty resilient, and even we came to grow weary after a while.

With such strong clamping force, not much pressure is placed on the crown of the head. For what little there is, the headphone’s more-than-ample padding and moderate venting are designed to keep heads cool and comfortable.

One peculiarity we noted while getting used to the Mikros 90 was how crucial proper positioning was in getting the best sound. On our ears, placing them just a hair too far forward or too far back would negatively impact the sound dramatically, if not cut it almost entirely out.

Before we got to listening, we let the Mikros 90 break in for about 20 hours. Not only is that our practice when reviewing any headphone, but Martin Logan actually suggests doing so in its headphone manual. We then spent the next couple of weeks listening to the Mikros 90 with our iPhone 4S, a desktop computer running HD audio files through a Headroom DAC and headphone amp, and a laptop serving up iTunes through a NuForce Icon uDAC-2.

What immediately grabbed us about the Mikros 90’s sound signature was its pristine treble quality. Martin Logan did a good job of porting over that particular sound characteristic from its fine speakers to these headphones. The Mikros 90 managed to shine brilliantly and scintillate when necessary, but they never got too sassy up top. Even our brightest recordings never pushed these headphones to the point of sounding abrasive or sharp.

Transient response was equally remarkable. All the pointed nuances of plucked strings, smacked percussion and tapped cymbals were exposed with excellent clarity. “Slow Down” from Keb Mo’s album of the same name was a dazzling delight for our ears, filled with intricate pizzicato guitar, dry high-hat work, and snappy bass drum kicks.

The Mikros 90’s bass extension was impressively low for a headphone of this size, but Martin Logan keeps the low end on a tight leash. These are not bass-forward headphones by any means. We think that’s refreshing, considering the headphone landscape is flooded with plenty of that already. But some will undoubtedly find the Mikros 90 to be a bit too lean in the bass department. If muscular bass response is your thing, the Mikros 90 probably aren’t for you.

In between the gorgeous treble and modest but adequate bass regions lay the Mikros 90’s midrange – the swath of spectrum that had us scratching our heads. While we certainly commend these headphones for rendering crystal-clear, uncongested vocals and a good amount of tone in percussion, there were times when we really wanted the Mikros 90 to sound a bit warmer.

On our darkest recordings the headphones showed us they were capable of sounding rich, but on most of the tracks we listened to, we found ourselves wanting for something just a bit … huskier . For instance, Russel Gunn’s moody, rounded trumpet tone gushed over us as we took in “Blue in Green” from his Russel Gunn Plays Miles record. But Keb Mo’s vocal appeal lacked a certain authenticity.

On the other hand, the Mikros are capable of getting very up close and personal. Donald Fagen’s vocal on “H Gang” from Morph the Cat sounded as if it was coming from between our ears, while Dianna Krall’s “Devil May Care” was right in our face.

As for noise isolation, the Mikros 90 do a better than average job for an on-ear headphone – considerably better than B&W’s P3 and just a touch better than Harman Kardon’s CL.

Martin Logan successfully imports its signature approach to treble to the Mikros 90, and it is a treat for the ears. But the overall sonic character here is almost surgical in its precision. As such, these headphones don’t impart the sort of warm and fuzzy feeling we think many listeners appreciate. The Mikros 90 also exert more clamping force than we’re comfortable with, making them a little difficult to wear for marathon listening sessions.

Compared to the B&W P3, the Mikros 90 are clearer, more revealing, stronger in the low bass and avoid the P3’s upper midbass hump. Compared to the Harman Kardon CL, however, the Mikros 90 do not fare quite as well, in our opinion. The CL’s treble treatment is no match for the Mikros, but in all other areas – fit, comfort, midrange warmth and overall tonal character – the CL come out on top, and for $100 less.

The Mikros 90 will certainly appeal to those listeners that crave the treatment electrostatic headphones give to high frequencies, and they certainly are stylish and well made, but for the larger audience, we think plenty of other options exist which offer a broader appeal.

Video-editing app LumaFusion to get a Galaxy Tab S8 launch
Sennheiser’s latest earbuds do double duty as private TV headphones
Miss the iPod? Astell and Kern has the cure — for a price
All the new tech that blew our reviewers away this month
Best Bose headphone deals for April 2022
New Amazon Fire TV Omni QLED displays art, senses your presence
How to get Dolby Atmos on Netflix
How to add an app to a Vizio smart TV
How to watch The Weather Channel without cable
Samsung just dropped a massive 98-inch Neo QLED mini-LED TV
LG prices its Flex, StanByMe TVs, and debuts a new model that doubles as magazine rack
How to hide a channel on YouTube TV
Audio-Technica is celebrating its 60th birthday with a $9,000 phono cartridge