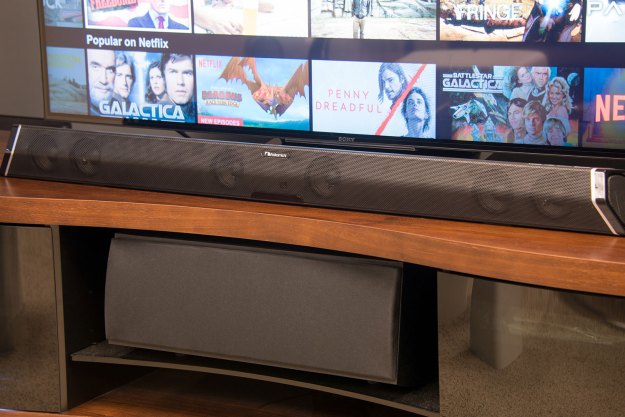 “Nakamichi's Shockwafe Pro update clears up the muck for a thrilling surround sound experience on a budget.”

Audio brand Nakamichi (not to be confused with Nakatomi, the skyscraper in Die Hard) may not be a household name these days, but the Japanese brand achieved major success stateside in the ‘70s and ‘80s. Nakamichi’s high-end stereo cassette decks represented the pinnacle of quality home audio back then, but the company fell out of favor during the rise of the digital age. Now, Nakamichi has returned on a renewed quest for home audio supremacy, embodied in its 7.1 surround sound bar, the Shockwafe Pro.

Similar to all-in-one systems like Vizio’s S5451w and the newer SB4551-D5 the Shockwafe (that’s wafe, not wave) forgoes the virtual surround employed by so many sound bars for the real deal, serving up dual satellite speakers anchored to a wireless sub and matched with a slim, yet powerful bar. And while the first iteration was loaded with DSP issues that muddled the sound and added more proof of Nakamichi’s continued digital demons, the brand has since employed a digital overhaul resulting in much better performance. The result is a clear and capable surround sound system at a very nice price.

Inside the Shockwafe’s familiar L-shaped box is everything you’ll need to get connected, including both an HDMI and a digital optical audio cable, a 3.5mm aux cable, long spools of color-coded speaker wire for each of the satellite speakers, and power cables for the bar and sub. Also inside is a stubby remote control with batteries and sound bar mounting brackets.

The bar itself is sculpted into a sleek, hexagonal tube with protruding drivers at the corners that draw the eyes as well as the ears. The plastic exterior of the bar and sub feel a little chintzy, as do the tiny surround speakers, but little touches like rubberized control keys and gleaming rivets atop the bar and sub respectively give the system more style than the aforementioned Vizio. That’s reflected in the Shockwafe’s original $700 MSRP, though Nakamichi later dropped the price to $500.

Getting the four-piece system going requires a bit more setup than your average bar/sub combo, but it’s still relatively simple — especially if your TV sports an ARC HDMI input. With ARC employed, you can simply connect the included HDMI cable to your TV via the Shockwafe’s TV HDMI port, change your TV’s audio menu to “external speakers” or “receiver,” and you’re set. If you don’t have ARC on your TV, your best bet is connecting via the Optical input or, as a last resort, the analog input.

The system is capable of a monstrous display of guttural power.

Next you can connect your other components (Blu-ray player, gaming console) via the Shockwafe’s dual HDMI inputs, and place the sub and satellite speakers at the recommended areas, with speakers behind the couch and the sub at its side. It’s important to note that you’ll need to either wall mount the speakers, pick up some small speaker stands, or have some conveniently placed furniture.

During our evaluation, the Shockwafe’s tubby little side-firing sub was easy to place due to directionality problems stemming from the fact that it plays so high in the frequency spectrum – it’s a dead giveaway. We also experience some standing waves so we had to fool with positioning a bit, with the driver facing toward the front of the room.

The Shockwafe can only decode 5.1 surround sound so it’s really just a five channel system. That said, there are actually 7 individually powered channels aboard, alongside an individually powered subwoofer channel, pushing a truckload of drivers. Those include four 2.5-inch full range drivers along the left and right side, dual 2.5-inch drivers at the center channel, both a 2.5-inch driver and a silk dome tweeter in each satellite surround speaker, and 1-inch drivers for the “extreme left and right” channels, designed to create a larger, more spacious wall of sound up front. At the low end, the ported subwoofer packs an 8-inch side-firing driver.

The bar stretches to 45-inches in length, and at just over 3-inches high and 3.2 inches deep, it doesn’t offer the smallest profile we’ve seen by any means. While it should rest low enough to avoid blocking any of your TV screen, low slung TVs may have their IR sensor blocked.

Aside from its unique shape and broad collection of drivers, the most remarkable design trait of the Shockwafe is arguably the remote control. In keeping with its mimicry of Vizio’s surround sound bars, the remote not only offers all the keys you’ll need for source, volume, subwoofer, and even surround sound control, but its illuminated LCD is the Shockwafe’s sole display. This takes getting used to, especially since keys controlling some menu options must be pressed twice — once to call up the display and once more to initiate the command. Control of options like subwoofer volume or rear surround balance is also a bit befuddling, as you must use the channel keys to scroll through each option and the “next” and “previous” keys to change levels.

Digital features include support for Dolby Digital and DTS Surround, 4K video passthrough, Bluetooth connection for wireless playback, and a whole mess of DSP modes. We’ve never been much for strong digital signal processing — the simple path is often the best one for pure cinematic sound — and the Shockwafe’s long list of highly colored DSP lead to our biggest gripes about the sound, but the brand has added two new “flat” modes, labeled DTS EQ and Dolby EQ, both of which offer the best performance by far. But more on that below.

In its first iteration, the Shockwafe was troubled with all sorts of digital signal processing woes that created a vexing, off-balance listening experience no matter which mode we employed. However, we’re happy to report that the company’s latest firmware update — which ships with all new available units — is a complete game changer. Details in the upper register are present and clear (if not a bit bright for our taste), contrasted by thunderous and full bass below, and extremely fluid and seamless surround sound transference that add up to a thrilling impression in dramatic moments.

The system locked us in from the get-go, creating a spherical soundstage of powerful action.

The first such thrill we encountered came from the last film in the Harry Potter series, The Deathly Hallows Part II, in which Voldemort casts aside the granite stones of Dumbledore’s grave to acquire the “Death Stick,” as lightning crackles through the sky and strings reach a fever pitch. Surround sound effects are passed effortlessly from front to back in such moments, and the system is capable of a monstrous display of guttural power.

A fun ride through the action-packed hilarity that is Deadpool in both DTS EQ and Dolby EQ modes also impressed. There’s a lighter flavor in both the front and back speakers when it comes to the upper midrange that can be just a tad crispy in select moments, such as the raindrops in the bar scene when Pool’s girlfriend Vanessa is abducted, and overall we wished for more warmth in that register.

That said, the system locked us in from the get-go, creating a spherical soundstage of powerful action from Deadpool’s comically violent assault on the unsuspecting caravan of bad guys. The action itself rings through with bombastic punch, offering weight behind gunshots and explosions, and impressive clarity for dialog when things get hot. Perhaps even more impressive, though, are the subtle details revealed in the mix — especially in the surround channels — which help create a fully immersive ride in the passenger seat of the mercenary’s maniacal quest for revenge. As you’d expect, the system also offers plenty of variables to fiddle with, including subwoofer level, surrounds, and center channel volume, which allows you to hone in your preferred balance.

Scrolling through the barrage of the other sound modes within the Movie category presents less clarity and balance, so we suggest sticking to the Dolby or DTS options. Surprisingly, that’s true when it comes to the Music category, which hosts its own versions of the Dolby and DTS modes that again represent our preferred listening level.

Music playback often fares better than you might expect for a budget surround sound system. It’s not audiophile experience, but its totally capable as the center sound hub for average listeners, and even offers impressive balance when keeping the surround sound processing on. Scrolling through some of our favorite playlists on Spotify via Bluetooth was a satisfying experience, and we also appreciated how responsive the remote is for switching tunes from the phone when paired to the system.

Nakamichi’s Shockwafe packs plenty of power, and its impressive deployment of real surround sound makes it an enjoyable experience when it comes to explosive moments in film and TV, creating an immersive soundstage with plenty of detail for the money.

While the plastic feels a little cheap, the system appears to be relatively robust in when it comes to build quality, and should last as long as you need it to with general care.

What are the alternatives

If you can still find one, a great alternative is the Vizio S5451w, which offers warmer sound performance and the same true 5.1 surround sound design. Alternatively, Vizio’s latest SB4551-D5 offers a sleeker and slimmer profile, as well as SmartCast for casting audio from select streaming services. That said, the Shockwafe Pro may have a leg up when it comes to fluidity between surround sound channels, to create an immersive overall sound profile that’s impressive for the money.

It’s a definite contender. While we’d suggest looking at the aforementioned SB4551-D5 while you shop, the Shockwafe Pro offers real competition when it comes to immersive surround sound on a budget, and that’s a good thing for all of those looking to raise their surround sound game without emptying their bank account.