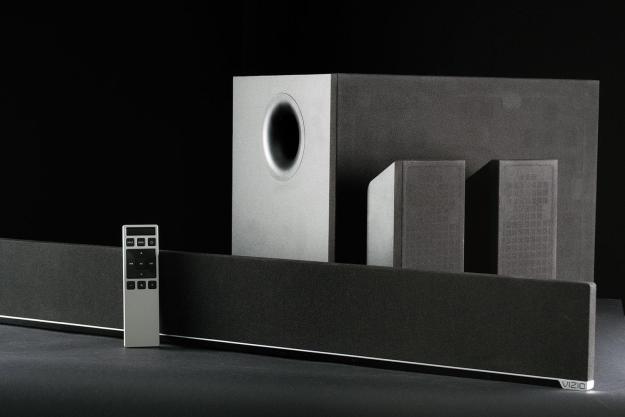 “There’s never been a better reason for you to kick “virtual surround” to the curb for the real thing.”

We were pleasantly surprised last year when Vizio, a company best known for its value-packed HDTVs, made a major leap forward in the sphere of supplementary sound with its impressive new sound bar lineup. We were particularly taken with the company’s S4251w sound bar surround system, which garnered our coveted ‘editor’s choice’ award for its ability to offer excellent performance on a budget, as well as something we almost never see in the genre: honest-to-goodness 5.1 surround sound.

The very latest addition to the family, the new S5451w, proves Vizio’s audio department is still cooking with gas. The system leapfrogs off its predecessor’s design, but goes big by stretching the sound bar’s length to an extensive 54-inches – suitable for TVs 55-inches and larger. With high expectations, this $500 system pulls its weight, serving up some of the best overall value on the market.

The S5451w arrived at our offices in a suitably gigantic box, and though it weighs only 9.5 pounds, freeing the couch-length beam took a bit of effort. Unsheathing the bar unveiled perhaps the weakest point for Vizio’s series: a rather underwhelming design aesthetic. It’s not an eyesore by any means, but it is a tad boring. Matte plastic around the backside meets a plain-Jane front face with hard angles at the corners and silver accents at the edges. It’s a design with a utilitarian vibe that looks much better mounted on the wall under a matching Vizio TV than it does on its own.

The rest of the system made a similar impression. The system’s small surround satellites remind us a bit of a budget pair of computer speakers, and the wireless sub is similarly unremarkable, cast in a long rectangle of flat black plastic, partially covered in grill cloth, with a large port as its only distinguishing characteristic. With all of that said, the system managed to blend in well with most of the TVs we tested it with and, hey, at $500, we aren’t complaining.

Included with the speaker system is a nice collection of accessories, with everything necessary for set up. That includes RCA connection cables for the satellite speakers, optical, and coaxial digital audio cables, an HDMI cable, power cables, and an RCA cable. Also in the box was a small remote complete with batteries and an LCD display, a quick start guide, and a wall mount template.

Apart from its mammoth width, one of the S5451w’s prime upgrades over the S4251 is the inclusion of a pair of HDMI ports, including an input and an ARC-compliant output which allows for easier connection and integration with ARC-compliant TVs.

Vizio keeps the front of the sound bar clean, with only a small row of pinpoint LEDs at the left corner breaking up an otherwise straight black grill. Rather than clutter up the sound bar with an informational display, Vizio places it on the remote control in the form of an LCD display. It took a while for us to adjust to looking at the remote for input status and volume level indicators, but we soon appreciated how the remote operated as the central command center. The remote covers all the basics, then goes a step further, offering level adjustments for each individual channel, basic EQ, stereo and surround mode switching, and even Bluetooth pairing and playback control from your mobile device.

As for internal components, beneath the S5451’s front screen are a pair each of 3-inch drivers for the left, right, and single 3-inch driver for the center channel, all accented with a 4-inch driver utilized as a “deep bass module.” Vizio doesn’t let all that extra space go to waste, either. Vizio claims the bar’s larger air chambers are utilized to build more bass response, and we’re here to tell you: The bar puts out some heavy hits in the lower register, even when the sub is laying low.

The S5451w system has no shortage of bravado

Now, about that subwoofer: Beneath the 12.5-inch long cabinet is a long-throw 8-inch driver, rated by Vizio to reach down to 35 Hz. As for the satellite speakers, each employs a single 2.5-inch full-range driver to do its dirty work – not exactly bookshelf/monitor size, but they get the job done. Vizio doesn’t disclose the specs for the S5451’s amplifier section, but a press release for the system claims it reaches “up to 104 dBof … sound and less than 1% total harmonic distortion.”

Digital features for the system include DTS TruVolume compression, and DTS TruSurround technology, as well as Vizio’s own Surround Matrix DSP, which allows for converting stereo into multi-channel sound. The latter was actually pretty impressive, able to split up music throughout the system nicely for most tracks we tested. Audio decoding includes Dolby Digital and DTS Digital Surround for up to 5.1 discrete channels.

It should come as no surprise that setting up the S5251w takes a bit more work than assembling two-piece systems. Like the S4251, the system routes the surround speaker signal to the subwoofer wirelessly, where the speakers connect using provided RCA cables. This relieves the user of having to run speaker cables from the front of the room to the back, but just as we’ve noted in the past, we wish the speaker cables were a little longer. As is, the short leash tends to limit placement options for either the sub or surround speakers. Of course, longer cables can always be purchased at a local electronics store if needed.

As for connection to your TV, we always recommend HDMI when possible. The sound bar’s HDMI input allows for connecting an extra video component, and if your TV has ARC, the ARC HDMI output can both send video and audio to the TV, and receive audio back from the TV via any of its sources (including sound from smart TV apps), all over a single cable. Most conveniently, ARC also allows for controlling basic options like volume and power from your TV remote.

If your TV doesn’t have HDMI ARC, you’ll need to use one of your TV’s audio outputs as the source instead. With two options each for digital and analog connections, ANY TV should work with the S5451w.

Much like virtual sex, virtual surround sound is no substitute for the real thing. We’ve spent enough time listening to audio systems that attempt to fake surround to know this you simply can’t get the level of immersion and excitement out of a couple of speakers employing digital processing and wizardry as you can from multiple speakers placed around the room. Surround sound should, ya know … surround you. Fortunately, Vizio’s S5451w has what it takes to deliver a taste of that cinema-like audio nirvana.

We kicked off our evaluation by letting this system do its surround sound thing, and found ourselves immediately immersed in sweet, room-engulfing action. By default, the surround speaker levels were a bit hot for our setup, but after so many reviews without that luxury, we rolled with it gladly. The first example in which the sound bar really caught our attention was a chase scene from Tom Cruise’s Oblivion.

We dug the Vizio system’s DSP, which breaks stereo tracks out into surround sound.

The scene began a little blandly, leaving us craving a deeper embrace of the dialog. However, things heated up quickly, as Cruise’s ship makes its escape from three attacking orbs – through a lightning storm, no less. The strafing of the pods from behind was vivid and accurate, and the system struck brilliantly from all angles as the ship navigated through laser attacks, buzz-filled lightning strikes, and powerful bellows of thunder. Suddenly, we were smack in the middle of the action – even the detailed smattering of rain on the windshield was well rendered.

This system isn’t capable of delivering subtler details and nuances as, say, the Def Tech Solo Cinema, or Denon’s DHT-S514. Then again, both of those options are more expensive, and they don’t do proper surround sound. While watching Orange is the New Black, we found dialog was always clear and well anchored to the center, but it wasn’t quite as nuanced as we wanted, and tended to sound a little smoothed over in parts. Still, sound effects were clean and well spread across the bar’s wide plot of real estate. There was just enough “presence” to the sound to keep us satisfied, and, moreover, there was never an acoustically offensive moment.

The S5451w system has no shortage of bravado – especially in the low end. The sub provides a broad foundation to the sound, and even when it was less engaged, that big sound bar proved it could pack a mighty punch of its own. Moments like the assault on the football field in The Dark Knight Rises were burgeoning with force, with transitions between sound bar and sub deftly handled. The lower midrange was especially potent, lending a gravelly crack to machine guns and pistols in films like Skyfall. Even the splash of the water as Bond falls from the bridge was weighty and full.

We do have a few complaints typical of budget offering: The sound bar could sound a little thick with overtones at times, which took away from the system’s otherwise decent definition. Also, certain effects would ring a tad metallic in the upper midrange and treble, sounding a little chintzy at times. Still, with minor adjustments to treble and bass controls, we were able to get a very pleasant overall balance that worked well across genres. Vizio has extracted just about every ounce of quality audio juice possible from this affordable little system.

We weren’t surprised after our action adventures to find the S5451w a good tool for Bluetooth playback of our music catalog. “Valencia” from the Decemberists, for instance, was served up with a pulpy push in the midrange, and even some welcome clarity up top, with tight cuts to string sweeps on acoustic guitar. However, the treble tended to get a little messy when we called up “Halo” by Depeche Mode. We were definitely aware that we weren’t hearing hi-fi audio there. But the system once again came through in the detail department – just enough to create a pleasant, engaging listen.

The biggest surprise? We actually dug the Vizio system’s DSP, which parses out stereo tracks into surround sound. While it didn’t work well for every track, it was fun to hear guitar kicked out to the right surround speaker, or tambourine coming from the back left. To be sure, casual listeners should have no trouble satisfying most of their musical needs with the S5451w.

Though Vizio’s S5451w can’t compete with a more elaborate hi-fi surround sound system, it also costs about a third of what you’d pay for even a basic multi-piece system. And, really, our complaints are few and far between. Short surround speaker cables, and a touch of a budget aesthetic to the overall design are small concessions to make for what is otherwise a value-packed system. There’s never been a better reason for you to kick “virtual surround” to the curb for the real thing.