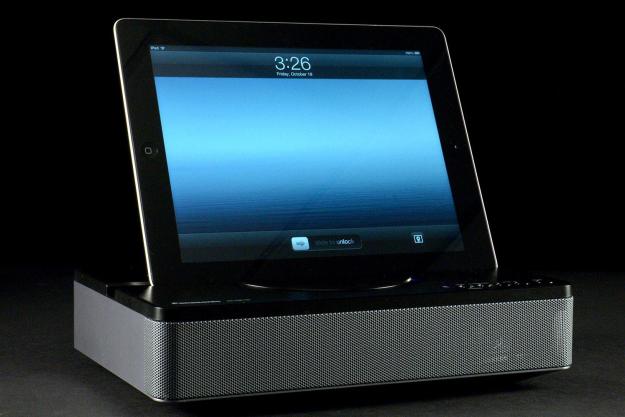 “The Panasonic SC-NP10 effectively turns your tablet or smartphone into mini home theater you can put just about anywhere.”

Panasonic goes its own way. When competitors dug into LCD TVs at full force, Panasonic remained committed to plasma, keeping a foothold in the flat screen business by churning out some of the best performing TVs money can buy. That same streak of individuality can be seen in its audio branch, where a focus on DSP and innovative designs has led to interesting creations like its SC-NE5 speaker, which matches a Bluetooth speaker bar with a wireless CD dock.

With the SC-NP10, Panasonic hopes to consolidate your video and audio habits with a device-agnostic Bluetooth system that can rock tunes from your smartphone and prop up any tablet to create a powerful and compact backdrop for movies and online TV. We were intrigued by the SC-NP10’s design, as well as its host of digital features like “Near Field Stereo” sound. Follow us below to see if the SC-NP10 is worth a spot on your table.

Pulling the NP10 from its package revealed a sleek platform, with a silver speaker screen across the front face, and a plastic coating of faux-brushed metal in all black along the top. At 3.5 lbs., the unit felt relatively light for its dimensions, and its succinct rectangular frame is easy on the eyes.

A crevice carved across the top sits ready to hold any sized tablet, and a snazzy circular design cut into the center is outlined with a perforated screen that lights up like an electric blue halo when the system is powered on. One of the five touch keys along the right corner will cut the lights for those not into the speaker’s default ‘Tron’ look, while also doubling as the system’s Bluetooth pairing button.

The cross slit along the top stand seemed perplexing at first, as it was cut too widely for our iPad to stay in place. Upon further investigation, however, we discovered a hinged stand which popped up from the back half of the circle, ready to prop up our device vertically or horizontally at adjustable angles.

The rest of the top face was rounded out by a thin rubber pad to secure our tablet, control keys for volume, power, “Direct Dialog Surround” (which we’ll get into below), and a small symbol at the left side which marks the spot for Near Field Communication (NFC) pairing. At the back of the device we discovered a bass port, a 3.5mm Aux input, and a pair of USB charging ports to allow simultaneous charging of a tablet and smartphone.

The only other occupants inside the NP10’s box were a small instruction manual and an included power cable – no remote control in sight.

While some have called the SC-NP10 a “dockless dock,” it could also be considered the tablet version of the latest compact home sound solution for flat screen TVs, the sound platform (or pancake, or plate…whatever). The platform design makes a lot of sense for both TVs and tablets, filling up previously unused real estate beneath a TV, and providing a one-size-fits-all sound solution for tablets while avoiding the high priced stands from the likes of Microsoft and Apple.

The other advantage to the platform design is low-profile real estate that can be used to generate more bass, and the NP10 promises big sound from its small “2.1” speaker system. The system includes a dedicated 3-inch “subwoofer” accompanied by a pair of 1 ½-inch x 4-inch drivers. Each of the system’s three channels gets 7 watts of power, with a total system frequency response of 50Hz-20kHz, and a crossover at 110Hz for the woofer.

Along with NFC pairing, the speaker employs Bluetooth version 3.0, with a feature called Bluetooth Remaster, though we didn’t notice any audible resolution improvement over similar devices. The NP10’s wireless streaming worked perfectly in our evaluation, and we experienced no signal drop outs, even when we left the room.

The system is augmented by a batch of DSP features. The default setting offers a form of virtual surround sound called “Direct Dialog Surround,” designed to expand the sound, while maintaining dialog clarity. The system’s “Surround Expansive Effect” is designed to create a stereo effect from mono sources. Pressing the “D. Surround” button switches Direct Dialog on and off indicated by a green LED, while holding the button until the light flashes engages the Surround Expansive mode. However, the latter only made things sound phased out on standard stereo content. Finally, there’s the “Near Field Stereo Sound,” aimed at creating a more immersive experience at close range – a thoughtful inclusion for tablet viewing.

Watching video content with the NP10 was a surprisingly immersive experience, especially considering its size and low online price, currently around $150. Cueing up The Avengers on our tablet, we engaged the “D. Surround”, which expanded the soundstage and added some power to the lower midrange and bass. From the very opening scene, the NP10 emitted a relatively potent jolt of power, and a virtual backdrop that occasionally curled around the space behind the speaker in a seemingly tangible semicircle.

Interestingly, the most well-defined virtual space was inhabited by the musical score, and several times we felt like the strings and brass were pushed out and to the rear, several feet beyond the NP10’s miniscule boundaries. As for action effects, we experienced a tacit, yet noticeable expansion of stereo movement, with gun shots taking up refuge at the corners of the sound field, and vehicle fly-bys deploying marginally traceable streaks across our viewing axis.

We were also treated to some impressive rumble in the lower register, creating booming explosions, thick, rounded machine gun fire, and dialog that was richer and more natural sounding than we expected. The fight scene between the Hulk and Thor was rendered with heavy thuds, and a decent level of power and depth in the lower frequencies.

There were a few moments which gave us pause. Some light distortion cropped up in the upper register in scenes such as the base explosion at the beginning, as well as in the rotors of the airship as it emerged from the water, but they were fleeting and far from overbearing. We also encountered some signal noise with the system at rest, which clouded the sound a bit. And we definitely never felt the kind of immersion you’ll get from an entry-level 5.1 system.

Moving to our music catalog, we had a similarly pleasant experience with the NP10. We were able to dissect plenty of instances in which we craved more detail, especially in the treble, which seemed to roll off quickly around the 10kHz range. But stepping back from the speaker allowed us to enjoy its powerful little soundstage, which easily filled the room. Using the NP10 in the background of a family gathering over the weekend, the speaker garnered several compliments for its warm midrange, and balanced handling of multiple genres, from Afro-pop to rock.

…stepping back from the speaker allowed us to enjoy its powerful little soundstage, which easily filled the room.

The bass was overdriven and distorted on the first track we auditioned, but disengaging the “D. Surround” mode immediately relieved the issue, allowing the low end to pour out in smooth, rich bass lines, and deep hits from toms and kick drums. We found the bottom quickly when we cued up our heaviest hip-hop tracks from Too Short and Dr. Dre, but the speaker still held its own for its size.

The upper register was relatively clear, rendering pleasant snaps from snare drums, and warm, bubbly lines from acoustic guitar, though more refined speakers could deliver more when it came to the finer details. Background effects to vocals on songs like “Halo” by Depeche Mode dissolved quickly, and while the myriad synth tracks were tight and cutting at the attack, they didn’t surrender the phase-y layers that normally echo into the distance, bringing the listener in. The system’s signal noise detracted from the clarity of the music on lighter selections, as well.

Still, the attractive little speaker performed its duties admirably from its glowing blue corner of the end table, spinning through our music collection with ease, and showing us more musicality and power than speakers of its size imply.

While we always wish speakers like the SC-NP10 were portable, the system makes up for its strings by offering a warm, powerful sound, an immersive stereo environment, and an impressive degree of versatility. Signal noise, and very occasional distortion detract a little from our score, but at $150, the speaker offers plenty of moves for the money. It should also be noted that during our evaluation, we glimpsed the platform for a short time on Panasonic’s website for only $100 — and at that price, it’s a steal. Even at its current Amazon listing, those looking for a tablet stand with a bevy of extras would do well to consider Panasonic’s SC-NP10.