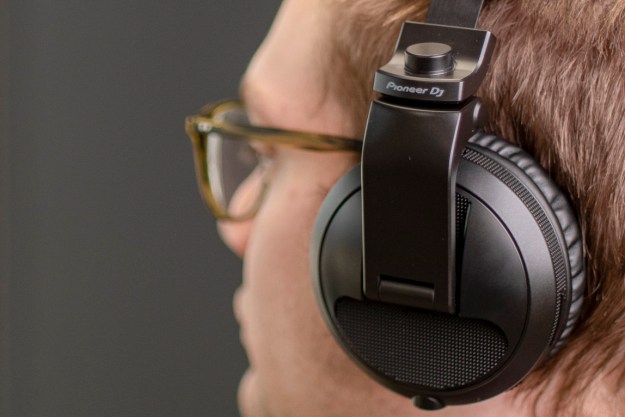 “The Pioneer HDJ-X5BT-K perform well both on the street and in the club.”

With the ever-growing assortment of affordable gear, audio workstation software, alongside popular hosting services like SoundCloud, the number of people making music at home or at the club just keeps growing. To get the most out of those DJ performances, you need a pair of headphones with a nice long cable, a ¼-inch jack, and the ability to easily pull off an earcup for cueing and beat matching.

But what if you also want a pair of headphones that work well with your jackless phone?

That’s exactly why Pioneer developed the HDJ-X5BT-K wireless DJ cans. These headphones are built to perform well both on the street and in the club or studio, outfitting aspiring DJs around the world with a compelling all-in-one listening solution.

Pioneer’s wireless DJ headphones come in a big box that includes an accordion cable with 3.5 mm termination, a ¼-inch adapter that screws onto the end, a micro USB charging cable, and an instruction manual.

Depending on which color you get — the HDJ-X5BT-K can be had in solid white, red, or black — Pioneer’s wireless DJ headphones can range from sleek and understated to a fashion statement. Regardless of your chosen pigment, the headphones themselves have a classic look, with round earcups that feature a slightly textured plastic design on the outside and around the sides, presumably to make them easier to grip and adjust with one hand during performances.

Bulky plastic hinges allow each earphone to fold up and away from your head for checking each side of a mix separately, and a soft, faux-leather headband and earcups make for comfortable long-term listening — a must for any DJ phones.

We got about three days of listening out of the Pioneer HDJ-X5BT-K.

We like the design of the headphones, but we do wish they came with a case for storing the cable (and even the headphones themselves) between listens. As is, you’ve got to find another way to tote them around.

It’s also worth noting that the build quality is solid, but not as robust as some other studio-style headphones we’ve tested that lack wireless connectivity, such as the Audio Technica ATH-M50. In particular, the plastic hinges that attach each earphone to the band should be paid attention to when toting them around, as they seem likely to be the first breaking point.

That said, we expect Pioneer has done a good amount of testing to make sure these remain robust long-term, and we didn’t experience anything warning signs other than a bit of earpad break-in during our weeks with the headphones.

The bottom of the left earcup is where you’ll find a place to connect the wired cable, which uses a proprietary connector to latch into the earphones, so you don’t accidentally dislodge the cable when performing on stage or in the studio. Above that you’ll find a micro USB port for charging, a button for power and Bluetooth pairing, and a rocker for adjusting volume.

Press the power button for six seconds to pair, find the headphones on your phone or other device, and you’re good for up to 20 hours of listening on the go — a healthy amount of juice for a pair of headphones that are relatively light and compact. In practice, we got about three days of listening out of the headphones, which easily matches up with Pioneer’s advertised number, and is solid for any wireless headphones at the $150 price point, let alone a pair that also is designed for wired use.

The included cable and ¼-inch adapter did their job when plugged into home audio interfaces and professional audio gear alike, and we liked the fact that the latched cable connection meant we wouldn’t pull the cable out of the headphones when they’re in use — it can be tough to find a small cable when on stage, or inside a cable-ridden DJ booth.

The Pioneer HDJ-X5BT-K may be solid DJ headphones first, but the company didn’t skimp when it came to wireless audio quality. They have aptX HD Bluetooth capability for pristine wireless sound, and we didn’t notice so much as a hiccup in playback during our testing period.

Given that the headphones are designed to perform best when listening to party music, we cued up our ultimate party playlist and let it rip, aiming to see how the cans performed with everything from classic soul to modern electronic dance music.

In all cases, we were impressed by how rhythmic the response was. Each beat seemed to punch through the headphones’ drivers on the low end, making it easy to beat match with one ear of the headphones on, and making the most energetic music in our library sound particularly exciting.

They do well to make all other genres of music sound good as well. There is a definite scoop in the midrange that removes mud from poor mixes, and also seems to make way for a good amount of top-end shimmer — something we don’t often expect from bass-forward DJ models.

Overall, the tonal characteristics of this Pioneer model are much more subdued than you might expect from a headphone that’s designed for DJs’ ears. That could be because they are also designed to be used for everyday listening, or it could be because the folks at Pioneer don’t have the same undying affinity for bass that makers of other DJ headphones do. In any case, we liked the well-rounded sound.

The sound also benefited from the HDJ-X5BT-K’s excellent passive noise isolation, with each earcup doing a fantastic job of blocking out the outside world.

Still, for all their passive noise isolation and relatively balanced sound signature, the headphones do feel a bit constrained in terms of musical space. Frankly, the stereo imaging on offer isn’t as expansive as we’d expect with such a quiet soundstage. This may actually be on purpose, though, as it allows you to more easily pick out which sounds are coming out of each earphone, rather than envision each musical element in a full and complete stereo image.

Pioneer covers manufacturing and workmanship defects for up to a year from the time of purchase.

The Pioneer HDJ-X5BT-K are a capable, well-balanced pair of headphones that do well to marry the wired needs of an amateur DJ or music producer with a wireless touch for hitting the town.

Those looking for a blend of DJ headphones and wireless headphones in the $150 price range will be hard-pressed to find many direct competitors. The closest competitor is probably the Audio Technica ATH-M50xBT, which retail for about $50 more than the Pioneer HDJ-X5BT-K, but offer a more robust build quality. Those looking for a cheaper, wired-only pair of DJ headphones should check out the Sennheiser HD 280 Pro ($100), which have been mainstays in studios and on stages for years.

If treated well, these headphones should last for years of solid use, though we always recommend using some form of case when traveling.