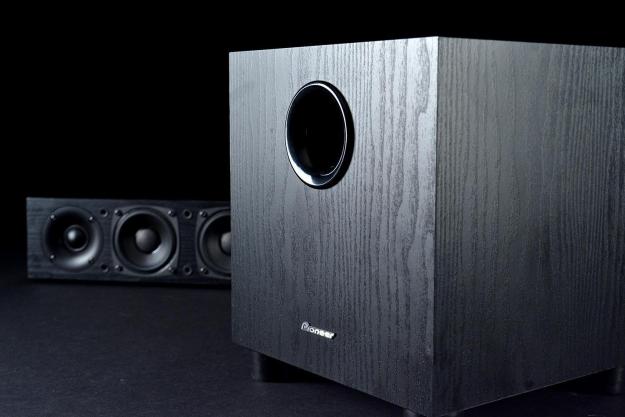 Pioneer was once king of the budget speaker market, offering a host of car and home audio speakers that pumped up the volume for a pittance. However, in more recent years, the company has found its numbers in the entry-level market slipping behind a legion of upstarts offering better performance at lower prices. To solve the problem, Pioneer called in its version of ‘The Wolf’: Chief Design Engineer and guru behind Pioneer’s renowned TAD speaker line, Andrew Jones. Jones’ expertise has paid off so far, reinvigorating Pioneer’s entry line-up with value packed systems like the SP-PK525S.

Mr. Jones’ latest design in the home theater segment is the SP-SB23W speaker bar (don’t call it a sound bar, it’s been here for…well, months). The SB23W boasts a six pack of individually amplified drivers, a stand-alone wireless subwoofer, and a respectable bundle of features, all for only $350. We walked away impressed with our first take of the SB23W at CEDIA this year, but we’ve learned not to trust first impressions at trade shows, so now we’re back for a deeper investigation. Follow us below to find out what Jones’ latest labor can do.

The SB23W arrived in a large box, with Mr. Jones’ signature tattooed conspicuously across the front and back sides. Opening the package, we unearthed a modest sized bar, set in a handsome composite wood frame, with wood grain ripples carved into the black ash vinyl veneer, and softly curved edges. A rounded speaker screen spreads across the front face to cover six speakers, with a V-shaped cutout to allow a display window of mirrored plastic too peer out from the center.

The bar arrived with no base attached, so we wound up digging through the accessories to find the unit’s stick-on foam pads, which were taped inside a hollow cardboard sleeve along with a small remote, two power cables, and a length of digital optical cable. Metal key-hole slots are attached at the backside of the bar for wall-mounting as well, but we ended up simply setting it on its belly in front of our TV.

At the bottom of the box was the SB23W’s small wireless subwoofer, surrounded on the sides by empty boxes to keep it centered and protected. The little sub is what candy makers like to call “fun-sized,” boasting dimensions similar to a large boombox speaker. Its sleek, cubed frame is set on four rubber feet, and the smooth exterior is interrupted only by a large gloss black port at the front, a silver Pioneer logo, and a back plate which hosts a Bluetooth LED indicator and a beaded red power light.

The SB23W is attractive enough with the speaker screen attached, but removing it reveals a much sexier configuration, unveiling an array of well-crafted drivers that look impressive considering the bar’s price class. Flanked out to the far sides are two 1-inch dome tweeters, while dual pairs of 3-inch midrange drivers line-up towards the center. Each of the drivers is individually powered with a 28 watt internal amp. The wireless subwoofer boasts a 6 ½-inch woofer inside, supplied with 50 watts of power. The total system frequency response is listed at 45Hz-20kHz.

At the back of the sound bar is a small selection of inputs, including the IEC power cord port, an analog RCA input, and a digital optical input. The SB23W’s Bluetooth connection rounds out the source selection, with no 3.5mm input or HDMI input to be found. Also at the back is a main power switch, and a bright red LED power indicator.

A small selection of buttons is set into the bar’s main control panel, allowing adjustment of volume, source, and standby power. The rest of the system’s features are accessed by the small remote, which offers basic controls for volume and mute, source selection, subwoofer level, and standby power, as well as Bluetooth controls to search and pause music from your transmission device. The SB23W also has the ability to learn your TV remote, allowing you to use one remote for your entire entertainment setup.

The SB23W is attractive enough with the speaker screen attached, but removing it reveals a much sexier configuration…

The bar offers very little in the way of visual representation, flashing only a couple LEDs for source and sound mode, which also pull secondary duties indicating volume adjustment, etc. The stripped-down configuration gives a general idea of system status, but we wouldn’t have complained about a real display.

Digital features for the system include Dolby Digital decoding, 8-channel DSP, and a trio of sound templates including movie mode, music mode, and dialog mode. The included manual appears to have mixed up the description of each template, but our testing revealed that the music and movie modes were relatively similar in sound, while the dialog mode accentuated the midrange, and rolled off the bass pretty heavily – helpful for watching regular broadcast programming without accentuating music and sound effects.

We connected the system to the optical output on our TV via the included cable. After plugging both the sub and the bar into an outlet, powering the system on paired the units automatically. Pairing our iPhone 5 was achieved by holding down the source key on the front of the bar until the blue LED flashed, and then connecting through our phone’s Bluetooth settings.

We spent a good week or so with the SB23W, perusing our Blu-ray collection, as well as watching basic broadcast programming, and listening to music via the Bluetooth connection.

We started with Zack Snyder’s visually riveting 300, and right from the start, the SB23W exhibited a sumptuous and rich color from the midrange down, and a detailed cut to the treble that allowed for an immediately enjoyable listening experience. The system showed its prowess for dialog at the film’s onset, carving out a clear and textured display of the narrator’s gritty baritone voice, and a soft, present touch to the consonants. A particularly revealing moment came when the Spartans came upon a young boy, the last survivor of a slaughtered village. The child’s whispered account was excellently defined, with clean, sharply carved lines that let us hear every word clearly without straining our ears.

The system also added some welcome definition to the rest of the production. The thunder bolts and rain cast down from the sky as the Persian ships approached in the maelstrom had ample depth. And the gratuitous battle scenes displayed visceral moments, such as the vivid snaps of the slave driver’s whip, deep plunks of arrows on shields, and dull metallic sweeps of swords as the small pack of Spartans defended the chasm to their doom. There was a touch of tinny color to the treble here and there, but it wasn’t anything that caused us trouble.

Moving through a wide range of content, the SB23W continued to impress. The bar showed good stereo separation in moments like the dragon scene in Harry Potter and the Goblet of Fire, allowing our ears to follow detailed sweeps across the screen. But more impressive was the system’s penchant for the finer details. As we explored both movies and broadcast content, we found ourselves focusing on benign moments like the thick ruffling of a newspaper, the movement of clothing, or the casting of sound off environments like closets or stone corridors, all of which created a deeper level of sonic engagement.

They say subtlety is an art form, and that rings especially true in the sound bar/subwoofer relationship.

They say subtlety is an art form, and that rings especially true in the sound bar/subwoofer relationship. While the SB23W’s little sub didn’t offer the massive, thunderous expanse of larger units at the deepest regions of the sound, it blended very well with the smaller drivers, mixing lower dialog, impactful door thuds, and musical bass lines into the upper realm effortlessly. The only real complaint we had with the low end came when we tried to move the cabinet away from the bar, which created some directional exposure of the higher frequencies produced by the sub’s small speaker cone.

The SB23W also sounded great for music playback. Soundtracks like the spread-out latin percussion in the background of Dexter impressed, as the SB23W showcased the array of instruments with good definition, without popping out of the background at an overwhelming level. And we continued to enjoy the warmth and detail of the sound signature while auditioning songs from our iPhone. The system leant a golden touch to acoustic instruments and vocals, while the clean upper register kept the attack of cymbals, high strings and brass tight. Older recordings like Neil Young’s “Alabama” came through just a hair muddy, exposing what we heard as a roll-off in the upper midrange. Still, the system provided good stereo spacing and plenty of accuracy, allowing us to enjoy it across our entire music catalog with few complaints.

The elephant in the room, however, is the SB23W’s much-maligned Bluetooth connection. Pioneer’s website acknowledges customers’ issues with wireless playback of only the right channel on some units, and in a roundabout way, the company offers to fix the malady for free. However, while our test model offered full stereo playback, the system cut-out multiple times over the few hours we used the wireless connection. Match our annoying experience with the more problematic stereo issue, and Bluetooth becomes a serious liability with the system.

Andrew Jones’ design chops spawned a worthy performance in Pioneer’s SP-SB23W, and we enjoyed listening to the system for all of our home theater needs, from action movies, to dramas sitcoms, and music. The system’s rich and clear sound signature, ample stereo spread, and musical low end provided just the right boost of sound quality, bringing our home theater experience to life; all in a neat and compact package.

If you plan on plugging in for most or all of your home theater needs, Pioneer’s SP-SB23W does provide an excellent sonic experience at an affordable price. Just don’t say we didn’t warn you.

Note: As of 1/3/2014, this review has been edited and updated to reflect improvements made in regards to wireless streaming performance and reliability. Pioneer claims to have addressed the Bluetooth issue we experienced and will continue to fix any lingering early models with which the problem remains.

Topics
SiriusXM now has an app for Vizio TVs
The best soundbars 2023: which should you buy?
The best wireless headphones for 2023: which should you buy?
The best noise-canceling headphones for 2023: Sony, Apple, and more
How to watch Puppy Bowl 2023
BluOS will be updated to 4.0 with a fresh look, new features
Samsung accidentally reveals price of its 77-inch QD-OLED TV
The best QLED TVs for 2023: bring on the brightness
The best OLED TVs for 2023: from LG, Sony, and Samsung
The 50 best movies on Netflix right now (January 2023)
The best movies on Amazon Prime Video (January 2023)
The best new shows to stream on Netflix, Hulu, HBO, and more
The best TV shows on Amazon Prime right now