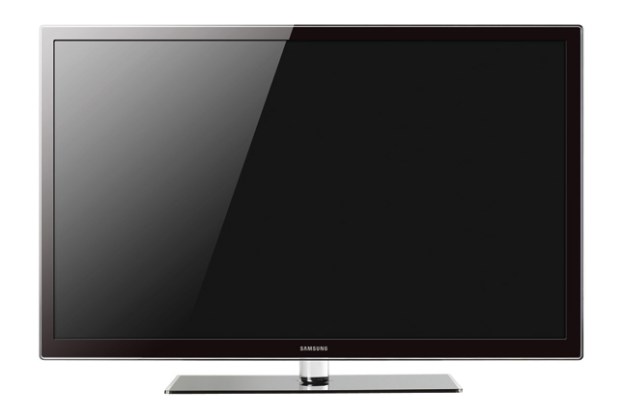 “We’ve seen the Samsung PN51D550 for under $900 on legitimate online sites, which is really a great deal. If you can live without Internet apps this is an excellent choice.”

Samsung D550 series information: The review of the 59-inch PN59D550 is based on our hands-on experience with the 51-inch PN51D550 Samsung TV. Our observations are applicable to the Samsung 64-inch PN64D550. Samsung says that the three Plasma TVs have identical specifications (save weight and dimensions) and should perform similarly.

With all the discussion about smart TVs, it’s easy to forget that not everyone needs access to a dozen different online video sources. What about a “dumb” TV that’s designed to simply display 2D and 3D programming? Enter the 51-inch Samsung PND51D500, which lets you watch 2D HDTV and 3D Full HD for a very good price. Let’s see if it does the job.

Anyone shopping for an HDTV might be puzzled by the 51-inch screen size, since 50 is the more typical measurement. Samsung cleverly shrunk the bezel to reveal a larger viewing area; actually it’s 50.72 inches, not 51, but why quibble? The narrow bezel makes the television look bigger. Samsung calls this Plasma +1 when it’s actually +0.72. Whatever.

Since this is a very affordable 3D HDTV, you really can’t expect Ferrari-like design; think of it more like a Malibu. It’s solid but without the fashionistas flair of expensive Sonys, Sharps and, yes, even Samsungs. There are clear edges around the frame and the matching stand, but the see-through plastic post is a bit hokey. Still we don’t think anyone will be put off by the looks of this HDTV. After all, other than interior designers for Architectural Digest, who really cares about the bezels of flat-panel HDTVs? The picture is what’s it’s all about, friends.

The Samsung PN59D550 measures 47.1 wide, 28.2 high and just 2.2 deep (in inches) and weighs 48.1 pounds for the panel, 57.5 including the stand. Assembling it is very simple and with the help of a friend you’ll have no backaches putting it into position.

The front is very clean other than a Samsung logo on the lower bezel. There are bottom-firing speakers rated the typical 10 watts for each channel. On the left side — facing you — are two HDMI and two USB inputs. On the rear are another pair of HDMI inputs (four total), two component ins, PC-in as well as an Ethernet port. You may ask why this television has such a connection since it can’t access Netflix, Facebook and myriad other sites? Basically it’s for All-Share, Samsung’s system for getting content (music, photos, videos) from DLNA-certified gear on your network. One of the USB ports can be used for an optional wireless LAN adapter if you don’t have a nearby Ethernet cable for your HDTV.

You’ll find the panel, stand and screws to put it all together. Unlike many other HDTVs, you only get a 24-page user manual which covers the basics; a more extensive e-manual is available via the supplied remote. This device is your straightforward candy-bar shape that only controls the television and compatible HDMI-CEC gear such as the 3D Blu-ray player supplied for the review (BD-D5500, $179 MSRP). The remote is not backlit, unfortunately. Since this is an active shutter 3D HDTV, the cost of the eyewear is an important factor in the total price of the system. Currently — as part of a promotion — participating retailers are supplying two pair of SSG-3100GB glasses with the purchase and additional ones cost $50. (Note: Make sure you check with the retailer before you buy so you don’t get dinged for these critical components.) Prices of glasses are coming down, but they’re still not as cheap as the freebies you pick up at the local Cineplex for passive 3D. Finally, there’s a small cloth for cleaning the screen. Once we got everything into place, we dutifully wiped down the display and settled in for a number of viewing sessions.

We placed the PN59D550 in position, connecting our FiOS cable box and a Samsung 3D Blu-ray player, then powered up. Wow! We’ll get into detail shortly but first we’ll state there’s a huge reason why we prefer plasma picture quality over practically any LCD HDTV we’ve experienced or reviewed — picture quality on this model is fan-tas-tic with a capital F. We’ve watched 3D “Avatar” seemingly hundreds of times, most recently during many LCD test sessions. When we watched the first scene when the hospital ship sails through space on the Samsung, there were colors we hadn’t seen since our initial viewing at the theater. Outer space had an inky blackness that LCD sets simply can’t match. Thanks to that depth, stars really shined, the red on the side of the spaceship popped—it was like seeing the movie for the first time. You really can’t ask for more than that. Picture quality is simply outstanding. Now for the nitty-gritty.

Using the Samsung PN59D550 is quite simple. The startup menu asks a few basic questions and then you watch TV. The default picture setting is standard, but as inveterate tweakers we had to check out the menu system which is very straightforward and understandable. Your Picture options also include dynamic, movie, cal-night and cal-day. The last two are basically your custom settings for use during — you guessed it — day or night viewing. Here you can go wild adjusting contrast, brightness, sharpness, color tint, darkness, just about anything you’d like. We fiddled with the sliders here, but found the defaults pleasing, with enough brightness and contrast to satisfy our visual tastes. It would be nice if there were a basic built-in calibration system as found in LG sets or a THX option, but overall we won’t take away any points for this.

A nice plus is the fact the Samsung has SRS Theater Sound which definitely adds a nice ambience to movie soundtracks. We enabled this during our tests, Of course, a 5.1-system or soundbar would be the way to go but the speakers actually sounded quite good for their specs.

Since this is a very affordable active-shutter 3D HDTV, 3D movies were given a workout including Tron: Legacy and Avatar. There’s been much debate between active shutter and passive camps about which is better, more comfortable, affordable and so on. We liked the LG LCD passive system, but noted the quality wasn’t quite as good as true active shutter 3D systems. After experiencing Tron and Avatar on the PN59D550, we have to clearly state this 3D is far superior to passive LCD and active shutter LCD HDTVs. Crosstalk was practically nonexistent, so the effects were crisp and as realistic as one can expect from Hollywood artifice. When Flynn fought in the gaming arena, the effects were spectacular. The air battle was pretty cool, too and the SRS did a good job with the Daft Punk soundtrack. In Avatar, we always check to see if the dots are clear in front of Sully’s eyes as he wakes from his slumber. They were, and the gas canisters flew off the screen nicely during the attack on the home tree. Just as importantly, while the effects were very good, the overall color of Avatar was terrific; far richer, and more accurate than any LCD we’ve tested. It’s a bit of cliché, but the quality of this HDTV made Avatar seem new and alive once again (a hard task, but true nonetheless).

It’s no secret there’s a dearth of 3D content, and the Samsung has 2D-to-3D conversion for “normal” video. Although it adds a bit of depth, it’s not worth the bother.

As for your basic cable offerings, the PN59D550 does a fine job. Sports on ESPN HD really shined, True Blood looked particularly sanguine, even the Pawn Stars looked like real human beings rather than the walking sharks they are. In other words, you’ll enjoy watching 2D shows and Blu-ray discs on this HDTV.

All is not perfect with this display, however. We test our television under different lighting situations (low light as well as fluorescents). The Samsung reflected the fluorescents much more than any LCD we’ve recently reviewed. Given that we wouldn’t suggest placing this HDTV in a family room with lots of windows — especially if you plan to do a lot of daytime viewing. Plasma may excel in many video parameters but handling tough reflections is not one of them.

We’ve seen the Samsung PN59D550 for under $900 on legitimate online sites (not counting shipping), which is really a great deal. If you can live without Internet apps (you can always buy the Samsung 3D BD player with an optional $79 Wi-Fi dongle) this is an excellent choice. By comparison, a new 50-inch Panasonic TC-P50ST30 plasma is around $1,100, but with no glasses are included. On the plus side, the ST30 is Wi-Fi-ready so you can stream movies with a $75 adapter. Given that, if you just want to watch 2D and 3D BD discs as well as cable, it’s hard to go wrong with the Samsung — just make sure you get those free glasses.