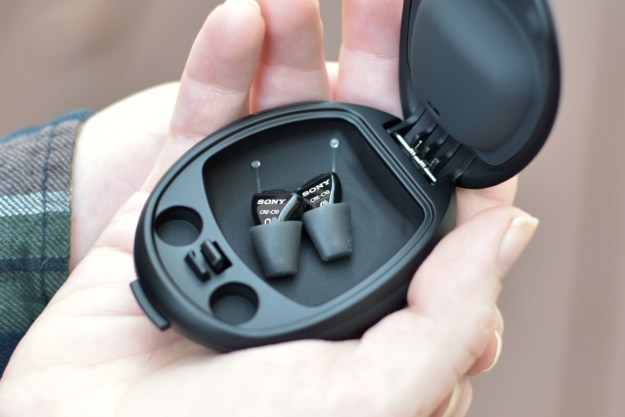 “Tiny, comfortable, affordable, and the right amount of hearing help.”

Sony is dipping its toes into the over-the-counter hearing aid market with the CRE-C10, a hearing aid made in partnership with WS Audiology.

The partnership is sure to give Sony a leg up in the complicated hearing aid market, where even a company like Bose has had to join forces with an established player in order to make its hearing aid strategy work.

Are the Sony CRE-C10 hearing aids good enough to compete with legacy hearing aids and new brands? I tested them for two weeks to find out.

Who are they for?

These hearing aids are aimed at people with “mild to moderate” hearing loss — a group that’s almost 50 million strong in the U.S. alone. However, only a tiny fraction of these folks have traditionally sought treatment, and fewer still choose to use hearing aids.

The rationales for not doing so cover the gamut. Everything from fears of being seen as old or incapable, to more practical matters like cost, comfort, and effectiveness in a variety of situations.

Sony might not be able to get people to admit they have a hearing problem, but for those who have made that leap, the CRE-C10 could go a long way to addressing their concerns about hearing aids.

The Sony CRE-C10 hearing aids are small, black earbuds with clear strings attached. Each earbud has a soft sleeve, and three sizes are included to ensure a good fit. Their small size makes them fit discreetly into the ear canal. They’re still visible from odd angles or very close up, but most people won’t notice them.

The design of the Sony CRE-C10 invites an obvious comparison to Eargo 6. When I reviewed the Eargo 6, I was left with one question: Who are these even for?

By now, I’ve got a guess. These discreet, no-frills hearing aids are surely intended for professionals working in conservative office environments. Someone can wear them to work and be confident that none of their coworkers will notice or speculate about whether or not the wearer is secretly listening to music (since neither has Bluetooth).

In other words, they don’t look like hearing aids or act like earbuds. That sets the C10 and Eargo 6 apart from competitors like the Jabra Enhance Plus, or even the (unreleased) Sony CRE-E10, all of which have a larger, earbud-like design with audio streaming.

With that competition in mind, the C10’s $999 price tag seems cheap. It’s certainly cheaper than Eargo 6, which costs $2,950 per pair. The cost of batteries is barely worth mentioning, amounting to a few dollars per month.

The hearing aids don’t have a power button, so you must open the battery door whenever you aren’t wearing them. This was a surprise to me, but apparently, it has been a common problem among non-rechargeable hearing aids pretty much since these devices were invented.

The battery doors have an edge that makes them easy to open, at least for someone with fingernails. Opening the battery doors may pose a difficulty to people with mobility problems, but no more than the tiny hearing aid batteries themselves.

They seem like sturdy little earbuds, but they still require the same careful treatment as any other hearing aid. They shouldn’t be exposed to water or dropped from any height, and they should be kept in the carrying case when not being worn. That last part is extremely important, because the battery doors are quite fragile when open, as other reviewers have pointed out. They could easily break if stored in a pocket. The Sony CRE-C10 come with a clam-shell case that opens and closes easily and has dedicated slots for two spare batteries.

Sony CRE-C10 require a smartphone with an internet connection for setup. After setup, your phone doesn’t need the internet to use these hearing aids.

Setting up the Sony CRE-C10 took just a few minutes. First I created a Sony account, then I called customer service because the app didn’t seem to be working. It turned out to be a scaling issue, so I had to disable the Display Zoom setting on my iPhone. The customer service representative made this sound like a common problem, and indeed several customer reviews have mentioned being unable to use the app.

I paired the hearing aids in the app. The last step was “fine tuning,” which programs the hearing aids for the user’s degree of hearing loss. In this case, the app played a series of three beeps in different pitches, then asked how many beeps I heard. Each time I answered, the app would make adjustments, play more beeps, and ask again. After doing both sides, the Hearing Control app urged me to go to a hearing professional. I already knew that I had unilateral (or one-sided) hearing loss, so I saved the settings and went ahead with testing.

As long as your hearing loss is stable, you shouldn’t have to repeat the hearing test. If your hearing becomes worse over time, you really ought to see a professional. You may have a treatable problem or hearing loss that exceeds what these hearing aids can treat.

The Sony CRE-C10 hearing aids boosted volume noticeably. The sound was bright and clear. Voices sounded natural, not at all robotic or synthesized. When I covered my good ear, I could easily make out all the dialogue on the television. I had no problem following conversations in crowded restaurants, and I could easily understand the waiter.

Music was a bit more inconsistent, as it often is with hearing aids. High notes were sometimes a little tinny or shrill, whether the notes were piano keys or high-pitched vocals. The C10 also alleviated my tinnitus, the ringing sound that is a common symptom of hearing loss.

I didn’t have any major problems such as whistling, popping, or feedback. The hearing aids are also reasonably wind-resistant. There was a mild occlusion effect, most noticeable when I was singing along with music. Occlusion is the booming or echoing quality of sound, often one’s own voice, caused by the ear canal being closed off. For an idea of how it sounds, gently plug your ears and then speak. It sounds a little annoying, but there’s not much to be done for it if you’re wearing in-ear hearing aids.

Sony CRE-C10 hearing aids advertise 70 hours of continuous use with each size 10 zinc-air battery. I wore the hearing aid throughout most of each day, and the battery died in the middle of my fifth day of testing. By my rough estimation, the battery lasted about 68 hours. Since battery life depends on use, some variation from the average is to be expected. The battery life is on par with other battery-operated hearing aids.

The Sony CRE-C10 hearing aids are too new for anyone to guess their lifespan. What we do know is that Sony offers a limited one-year warranty. For comparison, traditional hearing aids tend to last between three and seven years. Most of them also have warranties that cover not only manufacturer’s defects, but accidental loss or damage as well.

Regardless, Sony is an established company, so I can confidently recommend the C10s without worrying that they will become completely unsupported if the company goes under or discontinues them.

The Sony CRE-C10’s closest competitor are the Eargo 6, which is no competition at all. Compared to Eargo 6, the C10 are far more affordable and comfortable, with better sound quality to boot.

Should you buy them? If you’re among those with mild-to-moderate hearing loss, and you’re willing to try a hearing aid, you should definitely consider it. They’re discreet, affordable, and of good quality. Sony’s first hearing aid makes me optimistic about the future of over-the-counter hearing aids.

Topics
Best headphones for 2023: Sony, Sennheiser, Apple, and more
The best kids headphones of 2023: for fun, safety, and more
Skullcandy’s latest Doritos-themed headphones feature UV glow stripes
Best Projector Deals for January: Save on Nebula, LG, and more
Beats Studio 3 headphones are $120 off today at Amazon
Best 4K projectors for 2023
The best ultra short throw projectors for 2023
How to watch Puppy Bowl 2023
BluOS will be updated to 4.0 with a fresh look, new features
Samsung accidentally reveals price of its 77-inch QD-OLED TV
The best QLED TVs for 2023: bring on the brightness
The best OLED TVs for 2023: from LG, Sony, and Samsung
The 50 best movies on Netflix right now (January 2023)