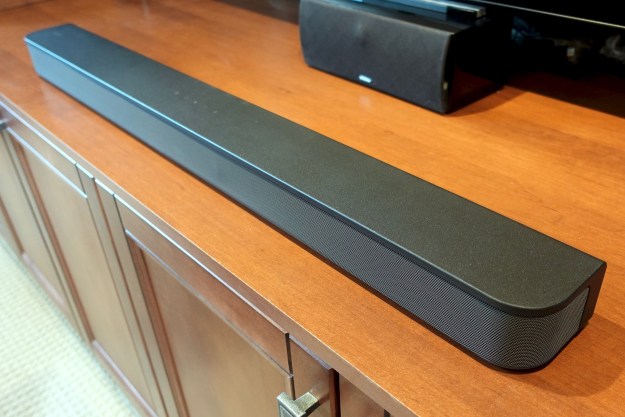 “Adding the Sony HT-S400 soundbar to your TV is a no-brainer, but you may find you want more.”

Looking to improve the quality of your TV sound, but don’t want to mess around with speaker wires and complex setups? You need a soundbar. One of the newest options is the $300 Sony HT-S400, a 2.1-channel soundbar that comes with a wireless subwoofer to help it deliver on the deep, low-end rumbles that give movies a theater-like quality.

Sony has opted to keep things super simple with the HT-S400. But in its quest to eradicate complexity, has it left its latest soundbar outgunned by the competition? Let’s take a look.

Sony’s classic, understated design philosophy works perfectly with soundbars. The HT-S400’s textured black plastic body and light gray metal grille call almost no attention to themselves, which should be the goal of any soundbar. At 35.5 inches wide and only a hair over 2.5 inches tall, you’ll be able to place this speaker in front of (and maybe under) almost any TV that’s 40 inches in screen size or larger.

The HT-S400 has the ability to connect to a TV via Bluetooth instead of the usual HDMI or optical cable.

The same can’t quite be said of its wireless subwoofer. It’s one of the biggest we’ve seen at this price at over 15 inches tall and 15 inches deep. Still, you should be able to stash it in a corner somewhere to make it less obtrusive. (Remember that subwoofer placement matters less due to the low frequencies.) Interestingly, as one of the few front-firing subs in this category, and with a completely protected driver, you potentially could lie it on its side, for even greater placement flexibility.

Speaking of wireless connections and placements, it’s worth noting that the HT-S400 has the ability to connect to a TV via Bluetooth instead of the usual HDMI or optical cable. Your TV will need to support the A2DP Bluetooth device profile, and sound quality won’t be as good as using a physical cable, but it’s a pretty handy option nonetheless.

If you want to wall-mount the soundbar, all you need is the wall-mount template included in the box, and a pair of screws — built-in keyholes and small plastic standoffs on the back panel should provide an almost flush-to-the-wall result. Should the soundbar block your TV’s infrared sensor, a built-in IR repeater on the back of the HT-S400 should prevent any communication problems.

If you like your technology simple and straightforward, you’ll love the HT-S400. Other than the Bluetooth option I mentioned above, there are only two ways to connect the soundbar to your TV: HDMI-ARC and optical. Sony includes an optical cable in the box, but if you’d prefer to use HDMI, you’ll need to supply your own HDMI cable.

With the exception of Bluetooth, there are no other options for connecting additional devices.

Whichever of these options you choose, you’ll get the exact same audio quality, so it really comes down to two things: Your TV’s outputs and your personal preference. If your TV doesn’t have an HDMI-ARC port, that makes things even easier — you’ll have to use the optical connection. Likewise, if you have an HDMI-ARC port, but not optical, the decision has been made for you.

But if you have both — as I do on my 2017 LG OLED C7 — here’s how to make your decision. The HT-S400 doesn’t have an HDMI input for passing through video to your TV, so if you don’t want to give up an HDMI input on your TV, use the optical connection. But if you want to seamlessly control the soundbar using your TV’s remote, and don’t mind losing that HDMI input, go with HDMI ARC because it enables HDMI CEC — a control communication pathway shared by pretty much all HDMI-equipped devices. This is something optical connections can’t do.

Unfortunately, whichever you pick, you can’t use the other one as a secondary audio input, say for a CD player, Sonos Port, or a Blu-ray player. In fact, with the exception of Bluetooth, there are no other options for connecting additional devices. That USB port you can see on the back of the soundbar? Ignore it. It’s strictly for software updates and can’t be used to play music from an external hard drive or a thumb drive.

Once you’ve made your choice, the rest is a snap: Plug the soundbar into your TV, plug the wireless subwoofer into a wall outlet, then do the same with the soundbar. As soon as you power on your TV, it should recognize that the soundbar is connected, and you’re good to go.

A small OLED display hidden behind the soundbar’s metal grille will show you whether you’re listening to the TV or Bluetooth, and it will also let you see adjustments as you make them to settings like volume, bass level, and sound field effect (more on that later). If the display is too bright, or you simply want it to turn off when you’re not using the remote, you can change its settings using the top-mounted controls on the soundbar.

I much prefer having a scrolling alphanumeric OLED display than a series of LED color dots that must be interpreted with the help of a legend — the way Vizio does on many of its soundbars — so kudos to Sony for including it.

If you happen to own a compatible Sony TV, and you connect the HT-S400 via HDMI, you can even see the soundbar’s settings on the big screen using Sony’s well-designed user interface, but I didn’t get a chance to test that.

Sony includes a small and basic remote control with the HT-S400. It feels good in the hand, but it isn’t backlit for easy viewing in darkened rooms. Then again, it only has a few buttons that you’ll need with any regularity. A nice, big volume rocker takes center stage, with a smaller bass level rocker and mute buttons within easy reach.

Growling engines, approaching thunderstorms, the footfalls of a T-Rex, they all sound deep and thrilling.

Normally, Bluetooth would get its own button. But since the S400 only has two inputs (TV, Bluetooth), you access Bluetooth via the input button. “Night” engages the soundbar’s night mode, which reduces dynamic sounds so you can still hear what’s going without waking your housemates, and “Voice” places an emphasis on higher frequencies so you can make out dialogue a little easier. Finally, “Sound Field” lets you toggle Sony’s S-Force Pro front surround processing on or off.

As a 2.1-channel system, with no support for Dolby Atmos or DTS Virtual:X, you should think of the HT-S400 as an upgrade to your TV’s internal sound system, as opposed to a full home theater solution. In other words, movies, TV shows, and music will all sound bigger and bolder — like they’ve been released from their audio prison — but they stop short of being fully immersive.

The HT-S400 isn’t quite as capable when it comes to the midranges, which tend to sound a bit hollow.

The biggest difference comes from the wireless subwoofer. It’s powerful enough to provide the low-frequency effects that we’ve come to associate with blockbuster Hollywood movies — growling engines, approaching thunderstorms, the footfalls of a T-Rex, they all sound deep and thrilling. The sub won’t shake your sofa or rattle your teeth, but given that the HT-S400 will likely find a home in condos and smaller rooms, that’s hardly a dealbreaker.

There’s also excellent clarity, especially in the higher frequencies, giving everything from gunshots to squealing tires a fun and visceral feel. Sony gives us a voice mode to enhance dialogue even further, but I found I almost never needed it.

However, the HT-S400 isn’t quite as capable when it comes to the midranges, which tend to sound a bit hollow. It’s much more obvious when listening to music than when watching TV, but there are still occasions when I expected a scene from a movie to feel richer than it sounded. One example is a scene from Denis Villeneuve’s Dune, where Duke Leto’s airborne ornithopter is approaching a spice harvester. Sonically, it’s a complex scene with voices and machinery competing with each other. A stronger midrange would have given the scene more realism without compromising the clarity of the dialogue.

Sony’s S-Force Pro virtual surround sound does a great job of expanding the soundstage outward and even adds some depth. It never sounds overprocessed and I found I wanted to keep it on for both TV and music content. But as good as it is, you’ll need to keep your expectations in check. It won’t magically make up for the absence of physical surround speakers, but it’s absolutely more enjoyable than the unmodified stereo presentation mode, and I was impressed by how close it gets to the virtual Dolby Atmos capabilities I’ve seen in products like the Vizio M-Series 2.1 and Sonos Beam Gen 2.

As I mentioned above, Bluetooth lets you stream audio from any compatible device, and it’s the only way to listen to music on the HT-S400 without turning on your TV. As with most Bluetooth connections, it’s not a hi-fi experience and Sony doesn’t even attempt to optimize it with AAC or aptX support. Once again, it’s the pale midrange definition that keeps the system from being a strong substitute for more music-centric soundbars like the Sonos Beam or the Bose Smart Soundbar 300, but given that those speakers cost $100 more and lack their own wireless subwoofers, perhaps that comparison isn’t very fair.

I’m tempted to wonder if a set of EQ adjustments could offset some of the midrange weakness, but Sony doesn’t let you adjust anything other than the amount of low-end coming from the subwoofer.

With a powerful wireless subwoofer, the HT-S400 is a dead-simple way to take your TV watching to the next level. But at the price Sony is asking, we think it should offer better midrange definition and a few more features.

There are several competitors worth mentioning — especially given their prices:

Sony’s products are typically well-built and very reliable and I see no reason why the HT-S400 won’t last for as long as you need it to. Firmware updates will likely be rare, but when they are provided, you’ll be able to install them via a USB thumb drive. Sony backs the HT-S400 with a standard one-year warranty.

Yes. Though expensive for what you get, the HT-S400 is still a great way to improve your TV sound. Owners of Sony Bravia TVs or other models with A2DP Bluetooth who want a wireless connection to their soundbar might have an additional reason to buy it, but we caution that this might reduce sound quality considerably.