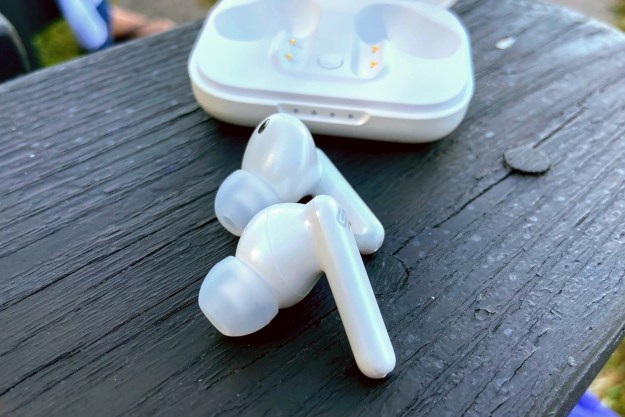 “If only their sound and controls were as good as their ANC, we'd have a real winner.”

This review was updated on August 25, 2020, by Simon Cohen after he received a new set of Urbanista London earbuds to check for concerns over poor sound quality.

So when Swedish audio brand Urbanista announced its new London True Wireless ANC earbuds, with a laundry list of features that put them toe-to-toe with the AirPods Pro, but with a price tag that’s $100 cheaper, it got our attention.

Maybe it’s not fair to compare a $149 set of true wireless buds to a pair that cost almost twice as much, but I think Urbanista wants you to think of the Londons as an AirPods Pro alternative.

They’re some of the most comfortable in-ear buds I’ve ever worn.

That much is clear when you look at them. From the elongated stem that drops down from the main earbud, to the gently rounded shape of the bud itself, to the placement of the silicone tip and the in-ear detection sensors — virtually every one of Apple’s design cues is present in the Londons. That’s especially true when you order them in the pearlescent white color, though the Londons are also available in navy, black, and rose gold.

As much as I’d prefer to see Urbanista do an original take on the true wireless earbud formula, there’s no denying that following in Apple’s footsteps leads to some good results. The Londons look good, and they feel good too. In fact, they’re some of the most comfortable in-ear buds I’ve ever worn. As long as the main body of the earbud fits within your ear’s concha (the part that’s on the outside of the ear canal) you should have no problem finding a comfortable fit by choosing from among the four sizes of silicone eartips that Urbanista includes. Speaking of those eartips, they’re made from very high-quality silicone, which I really appreciate. Too many earbud makers cheap out on this important part.

The London carry an IPX4 rating for water resistance. That’s good enough for a very sweaty workout on a rainy day.

The charging case is a departure from Apple’s design, but that’s mostly a good thing. It’s got a classy, rounded-corner clam-shell shape with clearly visible battery life LED indicators under the front lip. The lid opens easily and snaps closed firmly thanks to magnets that are perfectly balanced in their strength. With slightly larger overall dimensions, it’s not quite as pocketable as the Apple charging case, but it’s very close — and it has virtually the same weight.

Popping the earbuds in and out of their recessed docks is easy  — considerably easier than with the AirPods Pro — and they stay put when seated.

The case uses a modern USB-C connector for wired charging, but there’s wireless charging too — just set the case down on any Qi-compatible mat.

The similarity to the AirPods Pro continues when it comes to battery life, though in this case, Urbanista should have charted its own course.

At just five hours of play time per full charge, the London are on par with Apple’s buds, but these days, that’s not saying much. Most new true wireless earbuds — even ones that cost far less — exceed this number by two to six hours.

With a 10-minute quick charge, you can get an hour’s worth of play time and the charging case will fully charge the London four times, for a total of 25 hours of unplugged action.

On the ANC spectrum, you’ll find everything from the light touch of the Amazon Echo Buds, which use Bose’s noise reduction technology to gently smooth out unwanted sounds, to the AirPods Pro which deliver an almost unnerving cone of silence.

The Urbanista London fall somewhere in the middle, which is to say they do indeed block out a fair amount of sound — especially predictable, constant sounds like fans. To get significantly better ANC performance, you’ll have to spend a lot more than the London’s $149 price.

I like that you can choose between ANC on and off, and that there’s an ambient mode that lets some outside sounds in — handy during phone calls and while running or walking through an urban landscape. But I wish there were a way to adjust the ANC level via an app, which has become a fairly standard option among ANC earbuds and headphones alike.

When I first reviewed the Urbanista London, it was using a preproduction sample provided by Urbanista.

They sounded dull and lifeless.  “To say that they sound average would be to set a very low bar for the average set of true wireless earbuds, which is quite good,” I said. “No, the Londons sound much worse than that.” Yikes.

I wasn’t alone. Gizmodo’s Andrew Liszewski was also unimpressed by how they sound, saying: “There was a notable lack of crispness in every song I listened to, and while the bass came across loud and clear, it also sounded artificially boosted and ended up trampling over everything else, making everything sound muddy and flat.”

And yet, some other reviewers really liked them, so what was going on? Do Liszewski and I have such discerning ears that only we could tell how bad the Londons performed? That seems unlikely.

To finally put this question to rest, Urbanista sent me another pair to try, this time from the regular production run.

The verdict: The Urbanista London are still not superb performers when it comes to sound quality, but most people will like them just fine.

There’s plenty of bass, and they do a reasonable job of balancing the mids and high frequencies. This provides a sense of fullness, especially given that the low frequencies provide such a strong floor.

I still think they could do a better job of providing clarity and precision, especially through the highs, which continue to feel overly toned-down. But overall, it’s an improvement and I think it’s safe to assess them as “adequate” for most casual music listening.

Unfortunately, Urbanista still doesn’t have an app for the Londons, so there’s no way to tweak their EQ in order to come up with a balance that de-emphasizes the low end.

The Urbanista London can certainly be used for phone calls, but if call quality matters a lot, you may want to look elsewhere.

They have a tendency to pick up on background sounds more than some other wireless earbuds I’ve tried and the quality of your voice when speaking to callers is mediocre. The person who typically fields my earbud test calls said it sounded like I was very far from the mic.

Controls and ease of use

Pairing the London is very easy — simply open the case with the buds still inside, and look for the device in your Bluetooth accessory list on your phone. Unfortunately, they’re not equipped with Bluetooth multipoint, so you can only pair them with one device at a time.

There’s also no way to use just a single earbud because of the wear sensor that automatically pauses music when you remove an earbud — functionality that can’t be disabled.

Surprisingly, there’s no ability to skip tracks, which I’d argue is more important than volume control.

The only exception is when making or receiving calls, which can be carried out using just either of the earbuds on their own.

The London use a touch-sensitive control area on each earbud, marked by the Urbanista logo at the tops of the stems. Like many touch controls, you need to be reasonably accurate when tapping; tap too low on the stem and it won’t respond.

The Londons are more finicky with touches than I’d like. Double taps were often interpreted as single taps, which became annoying after a while.

You get the standard collection of controls, including play/pause, volume up/down, call answer/end, but surprisingly, there’s no ability to skip tracks, which I’d argue is more important than volume control if you’re going to make a choice between these two functions.

You can turn ANC on and off, as well as activate the ambient mode, but when it comes to voice assistants, only Siri is fully supported.

Due to the absence of an app, there’s no way to reconfigure what the various tap sequences do, or which earbud they are assigned to.

Feature for feature, the Urbanista London should be a slam-dunk considering their relatively inexpensive price and available ANC. They certainly get a lot of things right, especially in terms of design, fit, and comfort. Unfortunately, the London miss the mark in key areas like sound quality, call quality, and non-customizable controls.

If active noise cancellation isn’t a must-have, there are almost too many great true wireless earbuds to list. Most of them cost less than $100, and I think they all sound better than the London.

If ANC is key and you want to stay under the $200 mark, check out the Edifier TWS NB and the Panasonic RZ-S500W. Both provide great sound quality, ANC, and many more features than the Urbanista London for $200 or less.

Backed by a one-year limited warranty, the Urbanista London seem to be well built, with quality materials.

Their IPX4 rating gives them protection from some water exposure, and as long as you don’t abuse them, they should last as long as most of the true wireless earbuds you can buy right now.

No. As tempting as it may be to buy a set of active noise canceling true wireless earbuds for just $149, I doubt you’ll be happy with how they sound.