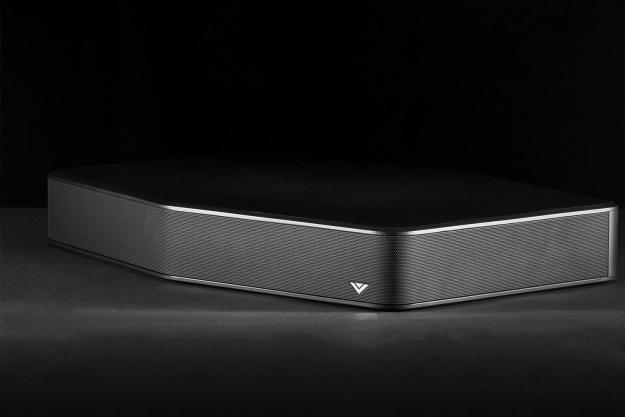 “Vizio’s new Sound Stand is a pinch hitter for a traditional sound bar at best.”

Vizio is the unofficial reigning king of high-value TVs. Lately, though, the company has proven it is just as adept at designing sound bars that deliver a serious punch to your ears, without the accompanying blow to your wallet. Units like the S5451W – a $500 system with actual surround sound satellite speakers – helped make us believers in supplementary audio the Vizio way.

With Vizio now working on its third generation of sound bars, we had a feeling the company would unleash a sound base (stand, platform … whatever) sooner or later. The S2121w-D0 2.1 Sound Stand – with its plain-Jane plastic exterior, and angled design – is almost exactly what we expected, fitting in nicely with the rest of the Vizio family, down to its bottom-barrel $250 MSRP. However, while the system is certainly no dog, its performance failed to impress us as much as its siblings have in the past.

Pulling the wedge from its box, the Sound Stand felt surprisingly light – almost too light. We were able to whip it around in our hands during setup like a hollow plastic component for a step aerobics workout. (Is that still a thing?) The hexagonal shape offers a modern aesthetic, but the boring matte plastic puts a damper on the overall presentation, and is pretty susceptible to fingerprints, too. Then again, as an entry-level device that sits beneath your TV, the Sound Stand isn’t exactly designed to wow on looks alone.

Vizio’s Sound Stand is a pared down machine, centered around minimalism.

At 3-inches high, the unit is bulkier than many sound bases we’ve encountered, giving it room for some respectably-sized drivers in front, as well as more space to radiate bass in its reflex chassis. The 5.25-inch down-firing subwoofer set at the bottom also showed promise the unit might offer some big sound for its size. However, while it’s rated to hold TVs up to 55-inches/60 pounds, its smaller overall dimensions of 21-inches wide x 15-inches deep will prevent it from holding TVs with wider stands – an increasingly popular design trend.

Accessories inside the box included Vizio’s familiar slim silver remote, two AAA batteries, a small startup guide, a cable each for its digital optical and RCA analog inputs, and a detachable power cable.

Unlike the Sony’s impressive HT-XT1 sound base, which incorporates just about every available feature under the sun, Vizio’s Sound Stand is a pared down machine, crafted around minimalism. Its slim list of options is laid out on the simple remote, hosting a succinct collection of buttons that represent just about every option in the unit’s wheelhouse.

That said, the Sound Stand supports a respectable selection of inputs. Next to a set of basic onboard controls at the back, a small cubby hosts dual analog inputs for both RCA and 3.5mm, as well as both optical and coaxial digital inputs. The unit also incorporates wireless Bluetooth streaming to serve up tunes from a mobile device or computer, which can also be controlled via the remote.

Missing is an HDMI input, which means users won’t be able to take advantage of the highest surround sound codecs – though at this level that’s neither a surprise, nor much of a hindrance. However, no HDMI also means those with ARC-enabled TVs won’t be able to control the unit with a TV remote, making day-to-day operation less seamless.

Another notable omission is any real digital interface, either on screen, or on the unit itself. Instead, the Sound Stand relies on an array of LEDs at the left corner, similar to other Vizio units like the S5451 sound bar. However, while the S5451W sound bar includes a supplemental LCD screen on its remote, the Sound Stand does not. That makes changing inputs and engaging DSP features a bit of a guessing game until users get used to the ambiguous collection of LED flashes, mapped out by the quick start guide.

On the bright side (literally), engaging the Bluetooth button on the remote to pair your mobile device sends the LEDs zooming left and right like the red bar in Kit’s hood from Knight Rider – what can we say, we’re suckers for sci-fi nostalgia.

The on-board treble and bass controls make it easy to adjust the sound, and we also dug the Trusurround option, which did a good job of creating wider stereo spacing for movies, and even select music tracks. We kept the TV Volume feature off, however, as it was very aggressive with audio compression, causing all sorts of odd volume issues in an attempt to level out wide swings in volume.

Inside its diamond chassis, the Sound Stand packs dual 2.75-inch drivers, supplemented by a 5.25-inch subwoofer, which, combined, achieve a claimed 55Hz-19kHz frequency response. Power specs for the unit were curiously undisclosed by Vizio, so we’ve reached out for further information. For now, all we can tell you is that this baby gets plenty loud enough for most applications, though not without risking distortion – more on that below

There are some sound systems that just keep getting better the longer you play them, drawing the listener in as the richer elements of the sound unfold. Unfortunately, the Vizio Sound Stand tended to swing the opposite way for us. It never became an unpleasant experience, but delving too deeply exposed some real limitations.

The system did its best work at the polar ends of the sound spectrum. The subwoofer delivered more than enough power to pull off even the heaviest scenes in action and sci-fi flicks with bravado. In fact, our first order of business was to muzzle the bass a bit, as it tended to get a little out of hand, especially during music playback. Aside from that, the low end was full, focused, and surprisingly well controlled, which added some musicality to the table.

We were also pleasantly surprised by the upper register, which showed a deft hand for carving out more delicate moments. Though it wasn’t as precise as the XT1 when it came to the most precise effects, it impressed with its ability to ring out the whirs and buzzes of the cold fusion device in Star Trek: Into Darkness, or the metallic click of steel-on-steel when an ammunition clip locked into place in Skyfall. And there’s no doubt this little bomber can get plenty loud, though pushing it too hard had a tendency to dig up some distortion in the upper layers.

This little beast got plenty loud, though pushing it too hard had a tendency to dig up some distortion.

But the real trouble came with a muffled cloud that surfaced in the midrange, hindering the kind of clarity we expect from such a device. That’s too bad, too, because adding clarity is a key consideration for those looking to replace or supplement their TV’s on-board sound. The issue first appeared in bass-rich dialog, where the color of voices often sounded filtered, as if characters were speaking through a swatch of carpet. The gravelly tones of the infamous Batman voice from Dark Knight provided the most egregious example of this issue, but we soon began to have trouble deciphering dialog and vocals, as well as other midrange instruments and effects in virtually all content we auditioned.

Listening less critically, there are some very enjoyable moments to be had with the Sound Stand, and there’s no doubt it will cream your TV’s wimpy audio. Still, regardless of the medium, the very purpose for buying a sound system is often focused around improving clarity in the meaty section of the midrange, and the Sound Stand definitely has some trouble there.

Decidedly ordinary in design, features, and performance, Vizio’s new S2121w-D0 Sound Stand is a pinch hitter for a traditional sound bar at best. However, the company may have seen the writing on the wall, since online prices have begun to drop. At $200 or less, the Sound Stand may still be a bargain, but those looking for superior sound and functionality may want to step up to Sony’s XT1, which holds on to its title as the reigning champ of the genre.