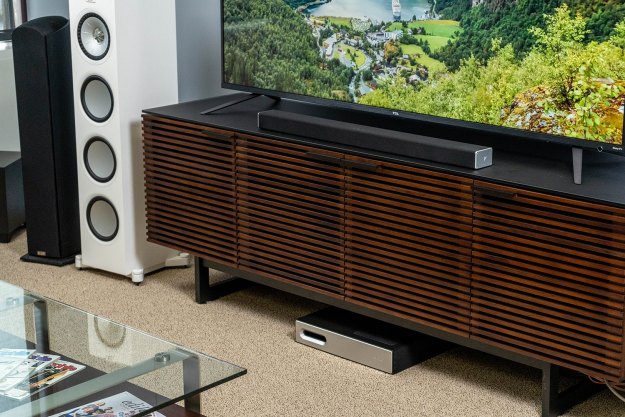 If you just spent a big chunk of change on a brand new TV, it can be tough to pony up even more cash to upgrade the audio performance for your favorite shows and movies. But given that even the highest-end TV models often come with woefully inept sound, you’ll most likely want to grab at the very least a modestly priced soundbar to pair with that new screen.

That’s where Vizio’s latest 2.1 soundbar system, the SB3621n-G8, comes in handy. With great stereo sound, an affordable $150 price tag, and a discreet subwoofer that is slim enough to sit under most furniture, there are few entry-level bars that offer you this soundbar’s mix of convenience and quality.

The SB3621n-G8 is an update of Vizio’s previous 36-inch 2.1 bar, which featured a subwoofer with a bigger footprint. Inside a bright orange box, you’ll find the bar, a sleek new sub (more on this later), a remote, instruction manual, and 3.5 mm and optical cables to link your TV and other devices.

Aesthetically, as with a lot of bars, there’s not much to write home about. We do like the rectangular bar’s sleek silver endcaps on each side, a Vizio design signature which matches nicely with the compact sub.

Speaking of the sub, Vizio has re-engineered its ported sub to be extremely thin, making it possible to place it under couches and chairs for optimum rumble, while also keeping it out of the way.

One of the biggest drawbacks of the SB3621n-G8 is its lack of HDMI ARC port. We don’t typically expect one on a soundbar in this price class, but we’re starting to see it more often. HDMI ARC allows for higher-quality playback from your TV (though it’s essentially a moot point for lower-priced soundbars like this one), as well as CEC control to use your TV remote for volume and power. You can program the Vizio so it works with most TV remotes, though, so with a little work, connecting with the included optical cable should tick the same boxes as ARC.

You may need to adjust the audio output settings on your TV to make sure it’s using the optical port, but that will depend on your make and model. Should you so desire — and your TV has one — you could also use the 3.5 mm jack to get sound to the bar, but Optical connection is by far the preferred method. The bar also includes Bluetooth for streaming music, as well as USB and digital coaxial inputs.

We were impressed by the plucky SB3621n-G8’s ability to draw us into the action.

The SB3621n-G8 doesn’t come with a fancy LED screen that can display the name of each input you choose, nor does it offer a digital screen on the remote like many other Vizio bars. Instead, the bar employs a somewhat confusing series of LEDs to let you know which input you’re selecting. Consulting the manual is your best bet here to translate the arrangement of white dots that denote the source.

We’re not huge fans of this system, but it isn’t a major issue. Frankly, you can easily bumble your way through the input selection on the remote until you find the correct input.

Speaking of the remote, it easily allows you to adjust the bass and treble response of the unit based on the acoustics in your space (more on this below), as well as adjust the volume of the subwoofer to suit your needs. You can also choose between “Movie” and “Music” sound modes. We like how many quick adjustments you can make on the fly — something other affordable soundbars often lack — but we do wish the remote had a backlight for changing settings in dark rooms. Still, for most people, it will be a set-it-and-forget-it device, and the volume buttons — likely what you’ll use most — are nearly impossible to miss.

We were immediately impressed by the plucky SB3621n-G8’s ability to draw us into the action on screen. With support for DTS and Dolby Digital audio, you’ll get solid digital sound right out of the box.

Despite its middle-of-the-road 36-inch width, the stereo image offered by this affordable bar is excellent, supplemented by the included subwoofer to create a vibrant and full-spectrum sound signature typically associated with much larger bars.

The included woofer won’t offer the kind of potent, cinematic rumble you’ll get from pricier options like Vizio’s 46-inch 5.1.4 Dolby Atmos system, but you won’t be disappointed with the SB3621n-G8’s ability to shake your seats during the scariest scenes in Stranger Things season 3. It also does extremely well with dialogue, accenting the voices on screen without ever becoming harsh or sibilant, even at high volumes.

The ability to adjust bass, treble, and subwoofer volume independently makes a world of difference when correctly placing the sub in many different kinds of rooms. In a smaller space that doesn’t need tons of rumble, you can simply turn the subwoofer down. Want to feel every footstep of that monster on screen? Pump it up.

One thing we rarely enjoy on affordable soundbars — and this one is no exception — is music. Even in music mode, there’s a boxy quality to our favorite tunes that makes the soundbar feel like an over-sized Bluetooth speaker, rather than a capable 2.1 system.

You can easily use the SB3621n-G8 to fuel a living room dance party or to provide some musical ambiance, just don’t expect to be floored with the detail — especially in the midrange, where it appears to be tuned to accent the human voice more than all instruments that surround it.

That said, that’s not really what this bar is designed for: If you want to listen to your favorite tunes in high fidelity, we still recommend you invest in a dedicated audio setup, rather than looking to a soundbar to solve your needs.

Vizio covers the product against defects in materials and workmanship for up to one year when the product is used normally.

Vizio’s SB3621n-G8 2.1 Soundbar System is a great way to get quality home theater sound at a very palatable price. It’s a great, value-packed addition to any TV that doesn’t yet have an outboard sound solution.

There are a few other affordable soundbars that we like, but none that offer this level of sound for the money. The TCL Alto 7 is of similar size — and comes with HDMI ARC — but for $30 more, it still lacks the ability to adjust the subwoofer level, which may make it too boomy for some spaces. For those who can scratch together a bit more dough, we’d recommend the Yamaha YAS-207, which costs $150 more, but offers much better sound and more advanced features.

Vizio has a long history of making very robust products, and we don’t expect this soundbar system to be any different. It should last for many years, provided you take good care of it.

Yes. If you are looking for a good soundbar at a killer price, this is among the best you’ll find. Even if it lacks the same advanced features as more expensive bars, Vizio clearly put its money where it counts — bringing you the best possible sound for the money.