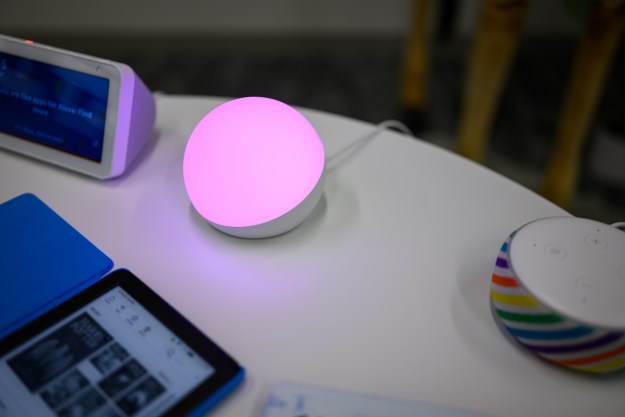 “Parents will love how the Amazon Echo Glow keeps kids on track throughout the day.”

Parenting just got a little easier, thanks to something you’d probably never suspect. A smart lamp. The Amazon Echo Glow can make getting kids out of bed, waking your littles up gently from a nap, or getting a less than attentive child’s teeth brushed less of a struggle using dimmable colored lights that can be controlled with an Alexa compatible device.

A light parents will love

A first glance, the Echo Glow looks like a funky little lamp, but it has a lot of neat features built in that can be used for a lot of different situations. Maybe the most obvious feature is that you can change the light color. There are 16 different colors you can choose from (including the strange choice of salmon) and four lighting effects, like Campfire and Disco. You can also adjust the brightness to your liking.

The more advanced skills are where things get interesting. The Echo Glow can be set up to work with Alexa Routines to keep your child on-task or on schedule. For example, you can set up the lamp to gradually get brighter when it’s time to wake up in the morning.

I’m not 100 percent sure the light gets bright enough to wake up a heavy sleeper, but it should work fine for kids that are easier to wake up. Another idea is that you can set a timer so that the lamp flashes like a disco ball until your child’s two-minute tooth brushing time is up. You can also make the light dim over time as a visual cue that they should wrap up screen time, or that it’s almost time for dinner.

The lamp also has a special feature called a Rainbow Timer. As time passes, the colors change. Amazon recommends using this timer as a visual reminder to keep your child on-track with a task. This is how it works. The timer starts on the color red. As it works its way through the rainbow, you know that the timer is winding down. When time is up, the color becomes lavender.

I’m not exactly sure how this helps kids, unless they remember the rainbow color sequence of red, orange, yellow, green, blue, indigo, and violet, to be able to understand the passage of time. Let’s be honest, some adults wouldn’t remember. It’s a fun idea, though.

By the way, you’re not going to be able to use the Glow as a reading lamp. It’s just not that bright. The Glow produces 100 lumens and a good reading light should be at least 450 lumens. Use it as a reading light and a headache and strained eyes are in your future. I think Amazon intended it as a way to set mood lighting or a night light, not as a task light, though.

If you want a comparable smart light that can be used as a reading light, the Lighting Ever Smart Table Lampis a good choice. It also has a much wider range of colors and works with Alexa or touch.

If you want a light like Glow, but want your light to be compatible with something other than Alexa, the Deeirao Smart Desk Lamp is another option. It is compatible with Amazon Alexa, Google Assistant, and IFTTT. It should be noted that these lights are substantially bigger than the Glow, though.

Certified for stressed out adults

The Echo Glow is “Certified for Humans” which means Amazon made sure that setting up and using the device is easy. I have to say, this label is completely true with the Glow. Even a harried parent of toddlers could probably set up and use this lamp within minutes. You just go to the Alexa app, scan a 2D barcode that comes in the box, follow the on-screen directions and you’re done.

Then you control the light using the app or voice commands through one of your other Alexa devices. Yep, that’s the only thing I really didn’t like about the Glow. It isn’t an Alexa device by itself. You need an Alexa device like the Echo, Echo Dot, Echo Plus or Echo Show, as well. If you’re buying the Glow for a child and don’t have a device to go with it, I would recommend the Echo Dot Kids Edition. It’s a cute, rainbow colored device that has parental and privacy controls so your child is protected. You can check out our review here.

In addition to voice and the app, you can also tap the globe of the lamp to change the color. I like that it responds to touch because your child can change the colors to however they like, depending on their mood. I wish they could adjust the brightness with a touch, too, which would be super helpful if your child wants to use the Glow as a nightlight.

Want to carry the light around? You have the option of plugging the Glow into a wall outlet or a device like your laptop thanks to the convertible USB plug. This would be super useful if your child gets attached to the light and insists that it follows them around the house.

As long as you remember that this smart lamp isn’t meant to be used as task lighting, and you have at least one Alexa device like the Echo Dot, you’ll love the little Echo Glow. It can make parenting a little easier and life a little more fun for your kids. I can think of dozens of uses for the routine feature, and I’m sure parents will find it endlessly useful. Even if it’s just used as a cool night light, the Echo Glow is a winner.

If you want your lamp to function as task lighting as well as a mood light or timer, then yes. If you want a simple, fun light for your kids that doesn’t take up a lot of room on their nightstand, then this is the light for you.

It seems pretty sturdy. I dropped it a few times and banged it around to see just how childproof it is and it didn’t crack or malfunction. It also has 90-day limited warranty and service if something happens to go wrong.

Yes. The design is just so gosh darn cute. It’s like having a little glowing buddy by your bed. Your kids will love this little glowing ball, especially when the monsters are lurking in the corners at bedtime.

Looking for more? Check out the best nightlight projectors we found for bedtime or relaxation.

Amazon might be using Alexa to send you targeted ads

Nanoleaf and Secretlab team on a new smart light strip