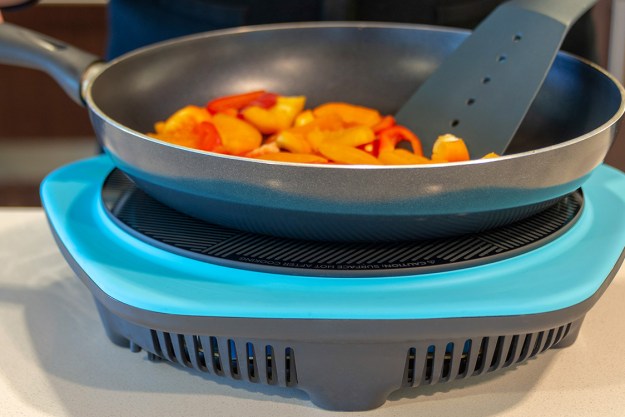 “With limited recipes and buggy features, Buzzfeed’s Tasty One Top is more for the Instagram crowd than the serious chef.”

You’ve likely seen Buzzfeed’s cooking videos on Facebook. We always wondered who they’re for. They zip along at a clip too fast for anyone to jot down the ingredients, and operate on the principle that it’s better to show than tell. We’ve seen friends share and comment on these recipes, but no one has brought a cookies and cream ice cream dome cake or sushi sandwiches to any parties we’ve attended.

Regardless if anyone actually follows through with making these treats, Buzzfeed found them popular enough to create a piece of cooking hardware, the Tasty One Top. It’s a smart countertop induction cooker that uses some specially-created recipes from the Tasty app using instructions and videos. We tried it out, making eggs, salmon, ragout sauce, and more. Sadly, we never got around to the taco cheese cups.

Evidently the Tasty One Top is available in all black, but our version is ringed in blue plastic. It’s more of a pentagon of plastic, but pentagoned isn’t really a word, is it? The cooking surface is black with gray lines, and a temperature sensor sits in the center. On the plastic, there are raised buttons for power and plus and minuses that control the power level. A series of 10 lights indicate what level you’re at, from one to ten. Its max power output is 1,500 watts, and it can get as hot as 450 degrees Fahrenheit.

On the side of the One Top is a jack for a meat probe, which also could be used as a temperature sensor for sous vide cooking. It comes with a rubber clip that lets you attach it to a pot.

GE Appliances’ FirstBuild helped Buzzfeed create the device, which explains why it shares some traits — like a secondary probe — with the Paragon Induction cooktop.

Setup is almost instantaneous after you download the app, which is currently iOS only. Down along the bottom, there’s an icon for the One Top. Click on it, and it will ask you to connect your device via Bluetooth or let you shop for one. There doesn’t seem to be a way to check out the recipes if you don’t have the cooktop. We found this out the hard way when we were at the grocery store, hoping to grab something to make on the One Top, which we hadn’t yet set up. If you have your cooktop plugged in and nearby, it pairs very quickly with your phone, and you don’t have to create an account to start cooking.

Sunny side of the egg

Once you finally get access to the recipes, you’ll find your choices are limited. We counted 34 “exclusive” recipes, plus different ways to make steak (three), chicken (three), pasta sauce (five), eggs (three), and salmon (two). There are also 40 “One Top Friendly” options, including several kinds of soup, a chicken and veggie stir-fry, and of course, taco cheese cups. None of these came in handy when we attempted to fry pork chops; there’s no chart of suggested cook times and temperatures for basic foods included.

The One Top is a few tweaks away from becoming a powerful teaching tool.

We started with eggs and made both fried and scrambled. For the fried eggs, the recipe instructed us to add a tablespoon of hot water to the pan and cover it with a lid. It’s a technique we’d never tried before, and it ended up working well in keeping the egg from sticking to the pan. Though the process does take you step-by-step, the recipe abandoned us when it got to how long we should cook the egg: until the yolk “is to your liking” isn’t terribly helpful with zero time suggestions.

The point of adding temperature sensors and connectivity to the cooktop is that guided cooking should be — forgive the pun — baked in to the process. Buzzfeed’s audience is millennials, many of whom don’t know how to cook. The Tasty One Top would be such a powerful teaching tool if it took that into consideration. The app knows how hot the cooktop is; why doesn’t it suggest one minute for a runny yolk and two for a firmer version?

We found that this wasn’t just an egg issue. Its flank steak recipe tells you to “sear until temperature of desired doneness is reached.” When we were browning the beef for our ragout, we had no guidance on how long it would take, so we tossed the cubes in. It wasn’t long before they started smoking.

A novice coming to this app shouldn’t have to feel like they need to go out and research temperatures for different levels of doneness. At the same time, more experienced cooks should have the option of more control — like if they want to skip a step, for example. It’s usually easy to do this in the app, but you can’t skip over timers, and that is really frustrating.

A novice coming to this app shouldn’t have to feel like they need to go out and do research.

You also can’t hit a “back” button to return to a previous step. If you remove the pan from the cooktop, the One Top shuts down after a certain amount of time. This is a feature of all induction cookers because they need the magnetic metal of the cookware to create heat. But if that happens with the One Top, the app kicks you out of the recipe, and you have to start again. Another smart induction cooktop, the Hestan Cue, had similar growing pains when it first came out, but you can skip back and forth between steps in its app now.

There is a way to set time and temperature in the app. If you hit “start cooking” at the top of the One Top page after connecting the device, it will take you to the control center. The “basic” tab has a timer, probe temperature, surface temperature, and power level that you can all set to your liking. The sous vide tab lets you dial in a temperature between 80 and 410 degrees Fahrenheit. The physical buttons on the cooktop will obviously let you operate the device even without connectivity, but you can’t set a specific temperature.

The Tasty app is very Buzzfeed-y. We’ve never seen so many scooped out pineapples filled with different kinds of food. Scrolling through — the only way to find anything besides searching — you’ll spy apple pie jello shots, bacon chicken wrapped mozzarella sticks, taco pizza, and other Guy Fieri-esque food. Most of these don’t pertain to the Tasty One, as the app’s hundreds of recipes don’t all pair with the device. Still, we found the disorganization of the app symptomatic of the Tasty One’s problems overall. It’s just not all that user-friendly or customizable. There are certainly interesting recipes you’d probably want to make for dinner, but you have to find them amongst the rainbow cereal cheesecake and edible balloons. Sometimes recipes seem more suitable for Instagramming than for eating.

Many recipes seem more suitable for Instagramming than for eating.

You can save recipes, but only if you sign into the app with Facebook or your phone number. We didn’t particularly want to do either, so we’ll never know where to find that mason jar peanut sauce we wanted to try.

With an underwhelming app experience, it comes down to the hardware. Most of the time, things worked pretty well. We boiled 16 ounces of water in about 2.5 minutes, which is much faster than our radiant stove. Our eggs consistently turned out perfect and were amazingly quick to make. There weren’t wild temperature swings when we sous vided some salmon, but it did creep up four degrees Fahrenheit over the target temperature when we were making pots de crème.

Product Labs, Inc. provides a one-year limited warranty for the Tasty One Top.

The $149 Tasty One Top is fairly new; it only started shipping in December 2017. More recipes are slowly trickling in, but we wish it had launched with a more robust, intuitive app experience. Still, it’s one of the cheaper smart induction cookers on the market.

The Paragon ($199) and the Hestan Cue ($500) are both smart induction cooktops with apps and Bluetooth connectivity. The Paragon uses a temperature probe and mat on its 14.5-inch cooker. With recipes separated into sections such as beef, breakfast, and vegetables, it’s fairly easy to find what you want.

Paragon’s app is more barebones than the Hestan app, though, which has videos for each step of the process and lets you watch them before launching the recipe. The Hestan system is a 12.5-inch burner plus pan with a Bluetooth capsule in its handle. A $300 smart pot is also available for purchase. Both have lots of staple recipes you’re likely to use frequently, but Hestan offers a more guided cooking process.

The fear of buying a smart product is that you could end up with an unsupported hunk of electronics if the company goes under. Buzzfeed’s Tasty is quite popular, but there’s no guarantee it will support the One Top indefinitely. However, you’d still be able to use it a regular, old induction cooktop sans smarts.

If you’re looking for a great gift for the college student in your life, we’d say spring for the slightly more expensive Paragon instead, which has more recipes they’re likely to make. But if you like Tasty’s shtick, check back in with the One Top in a few months to see if the recipe offering is more robust.