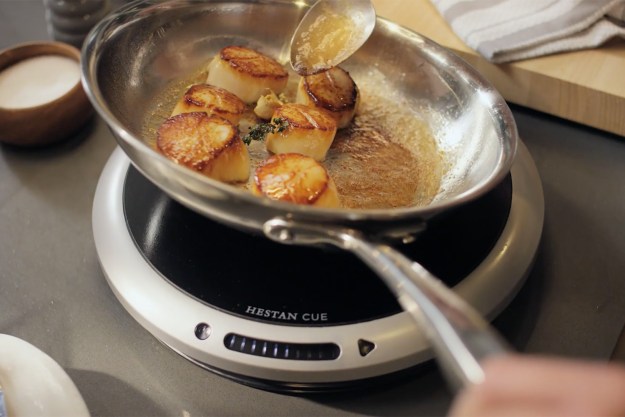 “The Cue's precise heating will give novice cooks the confidence to try bold new recipes.”

How hot should your cooktop be when you’re making scrambled eggs? The Hestan Cue wants to get it right down to the degree, not just medium-low. (Or is it low-medium?) The system consists of a pan with a Bluetooth-enabled capsule in the handle and an induction burner that communicates with the pan. If the pan’s surface is too hot or cold, the burner responds accordingly. Using an app, you control the burner as videos of a chef show you each step for making migas eggs. How does the supposedly foolproof combination of a precisely temperature-controlled burner and pan work when it comes to steak, caramel sauce, and pancakes? Our Hestan Cue review reveals all.

Firing up the Cue

A 12.5-inch silver and black disc, the Hestan Cue’s burner might look like a futuristic conference call device if it were smaller. It weighs about 4.5 pounds and has two buttons on either side of a slide-control that lets you manually set the temperature. With those dimensions, it likely won’t fit in many kitchen cupboards. When it turns on, it sounds like an exhaust fan and there’s occasionally a droning noise, which Hestan says is typical for induction. The 11-inch stainless steel pan isn’t meant to go in the dishwasher or oven and isn’t meant to be used on a traditional stovetop. The handle houses the removable smart capsule, which runs on a single AAA battery.

Using the iOS or Android app, you select a recipe. Before you start cooking, the app will instruct you to press the power button, which is to the left of the temperature control. Then you press the “next” button, on the other side of the control bar. The pan heats up very fast, typically within a couple of minutes.

Right now, the Hestan Cue teaches users to cook — but it instructs them using a very specific recipe set. Let’s take scrambled eggs, for example. If you wanted to make them with the system, the closest thing is a recipe for migas eggs. When we first reviewed the Cue, it meant you had to click through instructions about chopping onions and then wait while the pan thought it was frying sausages. There was no way to skip these steps. A recent app update now allows you to hold the “next” button to skip a step — especially helpful if you’re not waiting for two hours for chicken to marinate. The update also allows you to hit the back button if you forgot how much garlic to add.

After you go through the recipe once and note the suggested time and temperature for cooking the eggs, you can use the Control Mode feature, which lets you select the power level or temperature through the app without having to go through a recipe. Still, for a guided cooking system, you’d think it would have more basic recipes aimed at beginners.

The way the recipes are presented is thoughtfully designed.

It would be ridiculously helpful if there was a chart somewhere with the suggested cooking times, temperatures, and power levels for common foods. Mix and Match lets you choose a protein (chicken breast, pork chop, pan-seared scallops, and so on) and a sauce (bourbon and brown sugar, burnt honey glaze, mushroom masala) and combine them, giving a bit more versatility. You can also make these without choosing an accompanying sauce, but it’s not exactly an exhaustive list.

Another quibble we have with the app is that you can’t really add time to the cooking step. This is actually interesting, because according to its own data, Hestan knows it can take different people between a couple seconds to up to a minute to flip a piece of food. One day the app might automatically adjust based on your prowess with a spatula, but for now you just have to leave the chicken to fry before hitting the “next” button.

Where the app shines, though, is its video instructions. Every step has an accompanying walk-through with chef Philip Tessier. When you open a recipe, you’ll see the prep and cook times. You can switch the number of servings from two to four and for some recipes, you can pick how rare you want your meat. If you’re wondering how difficult certain steps of a recipe will be, you can scroll past the ingredient and equipment lists to see all the videos before you launch the recipe. Unfortunately, whether the video would play sound seemed hit or miss for us, mostly falling into the silent movie category, sans subtitles.

The way the recipes are presented is thoughtfully designed, too. They follow the Mise en place system. The French term for “put in place” essentially means you don’t start cooking until all your ingredients are laid out, prepped, and chopped. The recipes are grouped in several ways, like quick and easy or gourmet, French or Mexican, dinner or snacks, gluten free or pescatarian. There’s also a search bar.

Get it (well) done

Because the Cue heats up so quickly, we found ourselves using the manual mode often. This means you don’t need the app to control the burner. While the smart pan is still recommended, the burner will work with other induction-compatible cookware. Anything that’s magnetic should work. Sliding your finger across the control button lets you set the power level from 1 (5 percent power, or 80 watts) to 10 (100 percent power, or 1,600 watts). It took some trial and error to figure out the proper settings, but the burner holds temperature well and produces even results.

It would be nice if you could see what the temperature is on the burner itself and manually set it.

It would be nice if you could see what the temperature is on the burner itself and manually set it. That way, if you know the Hestan app sets itself to 312 degrees Fahrenheit for a minute to make eggs, you can easily do that without pulling out your phone. We always say that what makes or breaks newfangled cooking appliances is how easily people can convert their own recipes to the new method. With something like the Instant Pot, a large and enthusiastic community has done much of the work for you. With the Hestan Cue, the information is there, you just have to dig for it.

The inclusion of a ruler with your Hestan Cue might be confusing at first, but the first time you pull up a recipe for salmon, you’ll get it. Just like choosing the number of servings, the recipe lets you input the thickness of your fish and your preferred doneness. Hestan Cue recommends you measure at the thickest point, so obviously you’re going to have parts that are more cooked if your filet is uneven.

One last thing that limits the usefulness of the Hestan Cue is the 11-inch pan. It’s good for frying and searing, but until Hestan comes out with a smart pot or smart wok, you can’t intelligently cook your entire repertoire.

Hestan recently partnered with immersion circulator Joule. You can select from a few recipes to have the two devices work together. It’s a nice pairing, because cooking a piece meat sous vide changes how you’ll use the burner and pan. If you’ve done it right, the meat should be cooked through ahead of time and just needs a sear. With the two working together, you don’t have to communicate that to the Hestan Cue. You will have to open each app separately, though.

The Hestan Cue comes with a one-year warranty.

Originally $650, the Hestan Cue is now available on Williams-Sonoma and other sites for $500. It’s really cool and may even represent the future of cooking. But yes, you can get a full-sized range — complete with oven but minus the smarts — for $150 more.

The Paragon Induction Cooktop ($299) works similarly to the Hestan Cue, but you can use your existing induction-compatible cookware. Its app has a more barebones approach; there aren’t the in-depth videos, but it does give you a quick and easy way to cook a steak, salmon, and more without going through an entire recipe first. Buzzfeed just paired with the GE First Build team for its Tasty One Top ($149), which uses technology similar to the Paragon. Pantelligent ($129) takes the opposite approach: It’s a smart pan you use on your stove.

Over the course of testing, we received three pans from Hestan Cue because there were issues with the first two. The first was a known issue, but the second was a mystery. We didn’t actually have to contact customer support, though — they reached out to us within an hour of the app saying it couldn’t connect to the pan. We even got an email from them on a Saturday. Accidentally putting the pan in the dishwasher is a $250 mistake. The fact that Hestan is a major maker of things like grills and commercial appliances means that there’s less of a chance (but not impossible) it will yank support for the Cue a few years down the road, leaving you with a very expensive induction burner.

If you love expensive cooking gadgets and have money to burn (but don’t want to burn your steaks), the Hestan Cue will definitely up your culinary game. For those on a budget, though, you might want to look at one of the sub-$200 options.

Best Keurig Deals: Get a K-Cup coffee maker from $87 today