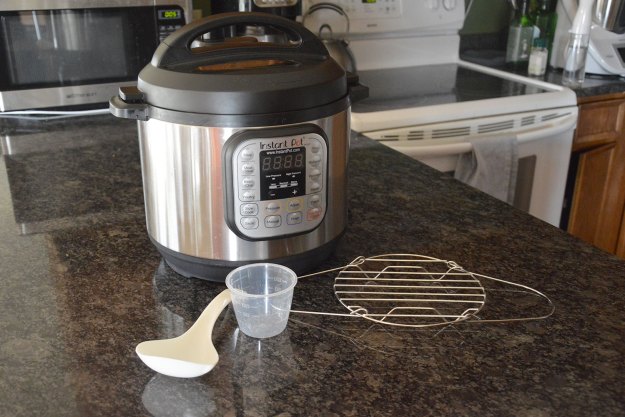 “It cooks quickly, but you'll need some patience to learn the Instant Pot's ins and outs.”

Pros
Cons
“Oh, my God,” a friend recently whispered. “It’s like you have a celebrity in your house.” She was talking about the Instant Pot review unit currently on display on our kitchen counter. It’s too big to live in a drawer, but it’s versatile enough that you might not mind it sitting out.

Chances are, you have a friend or relative who would just love to talk to you about their Instant Pot. It inspires rapturous prose in its Facebook group, where you’ll find tips on how to clean the IP (as it’s affectionately known), assurances that new owners will love it and shouldn’t fear it, countless photos of food, and at least one person who refers to it as her “darling.” Members there laugh amongst themselves about no longer needing an oven. We found a thread on one site where a user apologetically confessed to preferring to roast broccoli in the oven, seeming very afraid the IP users would turn on them.

Is the $100 7-in-1 device a magician or a charlatan? We tested it for ourselves to find out.

There are several different models of the Instant Pot and some come in different sizes. One even has Bluetooth capability, so it works with an app. The IP-DUO60 we tested is six quarts and has seven functions, including pressure cooking, slow cooking, rice cooking, steaming, sautéing, yogurt making, and warming.

All these functions have their own button on the front of the Instant Pot, and there are a few more controls as well. It’s definitely not a machine you can just dive right into using if you’re unfamiliar with pressure cookers. For one thing, there’s a little knob at the top that has to be turned to the sealing position to build up pressure. Turning it to venting releases the steam, so you’ll definitely want your hand in a suitably protective oven mitt before attempting. There’s also a “natural” venting option, which means the pot takes care of releasing the steam itself, which can take up to 15 minutes. You’ll know it’s safe to open the lid when the little silver float valve next to the knob is depressed.

The pot’s stainless steel interior gets the brunt of the cooking mess, and it’s also dishwasher safe. The lid isn’t, however. It does have a number of safety features: When it opens and closes and when you remove it, the pot makes musical jingling sounds. There are also temperature-control regulators to keep the device operating in a safe range.

Dinner in a flash?

Wondering why you’ll need a pressure cooker? It can offer slow-cooker results much faster. All over the web, you’ll see promises of 2-minute asparagus or 10-minute pasta. These are cooking times and don’t include the time it takes the machine to build up and release pressure. It takes more than 10 minutes for the IP to come up to pressure, depending on how much food you’re making. It’s not like preheating an oven, either — you’ll need whatever you’re making to be in the pot as it’s pressuring up.

In addition to its one-pot abilities, it is so much more.

The New York Times has a recipe for clam chowder that takes an hour on the stove. Instant Pot’s recipe doesn’t tell you how long its will take, but you’ll need to sauté bacon and onions, evaporate wine, pressure cook for five minutes, make a roux on your stove in the meantime, add it to the pressure cooker, and sauté for five minutes more. That doesn’t sound like it’s saving you oodles of time. When you factor in the pressure-building time and release time for steel cut oatmeal, the timing seems pretty similar, too.

So what’s going on here? Despite that example, there are many, many Instant Pot recipes that don’t require another appliance. While you’ll never get your stew beef browned in your slow cooker, the IP’s sauté function does this really well — albeit in several batches, as the pot’s size can be lacking. We saw many complaints about the sauté function not working well, but a common misconception seems to be that you can’t change the heat level. In fact, if you hit the Adjust button after pressing Sauté, you can switch between Less, Normal, and More. Changing the time is similar; after you select your program, you hit the Adjust button and use the plus and minus keys to add or subtract minutes. (That is a bit of a drawback — that you can’t add 30 seconds to a cook time.)

In addition to its one-pot abilities, it is so much more — a rice cooker, yogurt maker, steamer, etc. We made rice several times, and we found the IP very reliable. The recipe book has a really comprehensive table of water-to-grain ratios and cooking times for different kinds of rice, legumes, and beans, It has similar tables for meat, veggies, and fruit, but we found these less useful. For one thing, the language was sometimes confusing (“Normally fruit dish has precise requirement on the texture of the fruit.”) For another, it didn’t mention whether we should be using high or low pressure. When we followed the instructions for asparagus, we used high pressure for a minute and a half (one time when the 30-second capability would’ve come in handy), and they turned to mush.

Cheesecake: You can, but should you?

We tried making a bunch of dishes in the IP, in addition to rice and beans. We jumped in with an unknown quotient to start — a recipe we found online for a chicken dish. Though we’d read the manual, we didn’t watch any videos. After sloshing some olive oil in the pot with the sauté setting on normal, we soon had a kitchen appliance spitting at us like a cat at the vet. When it came time to actually start pressure cooking, we clamped down the lid, turned the knob to seal, set the timer, and fled the kitchen, just in case. After that, we humbly started our learning process over by making some hard-boiled eggs.

Our meat dishes always turned out really well, especially the chicken carnitas — though we did need to finish it in the oven. We found that traditional slow-cooked dishes often fare well in the pressure cooker. These Korean short ribs — which we’ve made the painstakingly long slow-cooker way — turned out just as great in the IP. The cooker’s robust community is both a huge asset and a drawback. There are some fantastic recipes out there, but you may wind up choking some down some unpalatable results as you separate the gourmets from the no-ways.

The cooker’s robust community is a huge asset.

One of the biggest problems we found with the Instant Pot is that it was sometimes easy to forget to turn the knob to Sealing. Ten minutes would go buy with no pressure building up. This happened once when we were making pasta, and when we finally fixed the problem, starchy water started belching out with the steam. When the cooking time was up, the pasta was properly cooked but there was still a ton of water in the pot, so most of the pesto we were supposed to have added went with it.

While we were testing the IP, the temperature outside climbed to about 85 degrees Fahrenheit, far too hot to turn the oven on. Why not use the appliance to make a cheesecake, then? It can be done, but it’s not something we would serve haughty guests. For one thing, you need a smaller-than-usual pan to fit inside the pot, and for another, there was a pool of liquid on top of the cake after we lifted the lid from condensation.

There are plenty of things the Instant Pot is well suited for, but it’s not going to make us give up our favorite range. The Sauté function has only three temperature settings, for one thing, and the pot itself limits the amount you can brown at a time. Instant Pot only provides about 30 recipes in its included booklet, so it’s great that the community has embraced the device and made so many of its own. That definitely ups the usefulness of this appliance, because it will probably take a while before many cooks feel confident adapting their own recipes.

Instant Pot offers a one-year warranty on its appliances.

The Instant Pot is a beloved and affordable device that lets you cook all kinds of things. Just don’t get carried away and think it can replace an entire kitchen – though it may replace your oven when it’s too hot to cook.

If you’re looking for a little more accuracy, Instant Pot also offers other models, including the Ultra, which gives you greater temperature control. And there are other multi-cookers on the market, such as the T-Fal 10-in-1, which we found to make a wide variety of dishes very well – and also sells for just a hundred bucks. Ninja recently introduced the Ninja Foodi, which does just about everything the Instant Pot can do, except it also air fries. It’s a bit spendy, though, starting at $190.

With its stainless-steel exterior and bowl, the Instant Pot is a fairly sturdy countertop appliance that should supply a few years of trouble free cooking.

Yes. We can see this working great for people that don’t yet have a zillion countertop appliances, because it replaces the need for a bunch of individual devices. However, if your counter is already crowded with a rice cooker, slow cooker, and so on, you might not necessarily want to add to the clutter. Just bear in mind that newcomers may have some failures before they learn their way around the pressure cooker.

Updated December 7, 2018 to note that there are other Instant Pots available as well as other competitors on the market.