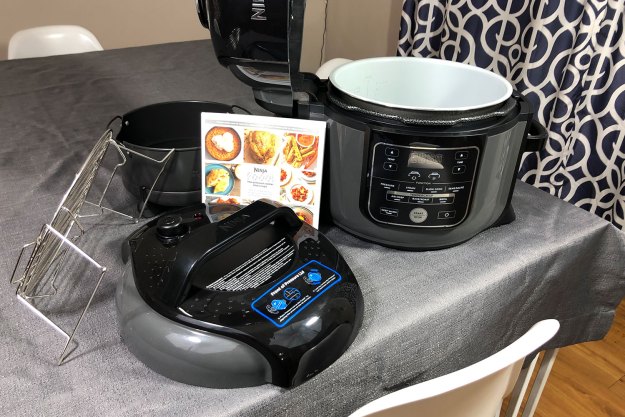 “The Ninja Foodi can do everything an Instant Pot can do, and air fry, too”

Instant Pot is perhaps the most well-known electric pressure cooker on the market these days, but you also have Gourmia, Taotronics, and other brands. Recently, Ninja came out with the Foodi, which is an electric pressure cooker that is unique in that it addresses a complaint many people have about pressure cooking; that it’s difficult to create crunchy foods or a crispy-on-the-outside-moist-on-the-inside product. In addition to pressure cooking and slow cooking, the Ninja Foodi OP 300 also air fries, crisps, bakes, broils, sears, and sautés foods. This means that you should be able to pressure cook a chicken and then crisp the skin — all in the same appliance.

How does it perform? We tested out the Ninja Foodi to find out if it really makes perfect French fries, fall-off-the-bone rotisserie-style chicken with crispy skin, cheesecake, chicken tenders, and other staples you can make in standalone pressure cookers and air fryers.

The Foodi sells for between $190 and $230 for the 6.5-quart version, but the exact price depends on where you buy it. That sounds like a lot of money, but you get a lot for that price.

One of the first things we noticed when the Foodi arrived is that the box is exceptionally large when compared to the Instant Pot and pressure cookers with similar cooking capacities. The Foodi’s pressure-cooking capacity is 6.5 quarts, while the air fryer can hold 4 quarts.

When you open up the large box, you find the oval-shaped Ninja Foodi cooker with the attached air frying lid, a pressure cooking lid and sealing ring, a non-stock ceramic inner pot that is PTFE- and PFOA-free, an air frying basket, a steaming rack with adjustable side handles, a condensation collector cup, a recipe book, a cooking guide, and a user guide.

The Ninja Foodi can be both a pressure cooker and an air fryer because it has two separate lids. The air frying lid is attached to the device by a hinge, and the pressure-cooking lid is separate from the device. It looks a lot like a lid you’d see on any other well-made electric pressure cooker, and it twists into place when you want to use the pressure-cooking option.

Because it has two separate lids, the Ninja Foodi can be both a pressure cooker and an air fryer.

It does it all…well almost

On the display of the Ninja Foodi, you’ll find several buttons, including pressure cook, steam, slow cook, sear and sauté, keep warm, air crisp, bake and roast, and broil. There are also time controls, temperature controls, and a start and stop button.

Air crisp: This function uses the air-frying lid. You can set the temperature between 300- and 400-degrees Fahrenheit, and you can set the cooking time in two-minute increments for a maximum cooking time of one hour. This function is ideal for a lot of recipes, including French fries, chicken tenders, and more. You can also crisp your pressure-cooked foods using this setting.

Pressure cook: Using the pressure cooker lid, you can cook foods on high or low pressure for up to four hours. You can set the time in one-minute increments for one hour. After the hour mark, you can increase the time in five-minute increments and cook for up to four hours. You can make a wide variety of recipes ranging from cheesecake to brownies to veggies to meats.

Steam: By placing the pressure lid on the Foodi with the sealing valve in the vent position, you can steam veggies and other foods. You can set the timer in one-minute increments for up to 30 minutes.

Slow cook: The slow cook function also uses the pressure lid with the sealing valve in the vent position. You can slow cook on high or low and set the timer in 15-minute increments for up to 12 hours. Slow cooking is ideal for things like soups, stews, and pot roasts.

Sear/sauté: This option uses no lid. It has five temperature settings: Low, medium-low, medium, medium-high, or high setting. You can brown foods before or after cooking, make sauces, gravies, or sear and sauté foods much like you would on a stovetop.

While the Foodi can do a lot, it is missing a few functions you’d find in other electric pressure cookers. For instance, it doesn’t have a yogurt or sanitize button, nor does it connect to Wi-Fi for app control.

We were pleased with the Ninja Foodi’s pressure-cooking capabilities. It heats up quickly, reaching full pressure within four to six minutes for most non-frozen recipes. The sealing valve is easy to secure in place, and very little steam releases into the air while the pot is heating up.

It’s successful as both an air fryer and as a pressure cooker.

The cheesecake we prepared (we used this recipe here) came out perfect, and the reversible rack that comes with the Foodi made it extremely easy to place the cake pan in the pot and subsequently remove it after cooking. Speaking of the reversible rack, it is much better quality than the typical steaming racks that come with other pressure cookers, and it is wide enough to nearly cover the entire bottom portion of the pan. This means you can steam or air fry larger amounts of food, and the baking pan stays more securely in place when you’re making something like brownies or cheesecake.

One major reason people like air frying devices is because they can create crispy foods without using a ton of grease. We prepared fresh cut French fries in the Foodi (using this recipe here). The fries were very similar in taste and texture to oven-fried French fries you make on a baking sheet by lightly coating potatoes in oil and cooking them at a high temperature.

One major benefit to using the Ninja Foodi over the oven is that you don’t have open the oven and turn the fries multiple times during cooking. With the Foodi, you can shake the fries around half-way through cooking to help them cook more evenly. One drawback is that you can’t cook as many fries as you could in the oven and still get good results. A small batch will produce perfectly crispy boardwalk fries, while a too large of a batch will produce some fries that are over cooked and some that are too soggy. This can be an issue with any air fryer though.

If you’re an experienced pressure cooker, you probably know that it can be difficult to get a good “finish” on certain foods. When you make a whole chicken, the inside is amazing, but the texture of the outside skin isn’t exactly appetizing. The Foodi is great at crisping pressure-cooked foods as long as you remove the excess liquid before you start the crisper.

We found it much easier to prepare a rotisserie-style chicken in the Ninja Foodi than to pressure cook it, remove it, and transfer it to the oven to crisp the skin. The end-product was better too, as the chicken being closer to the heating element made the skin come out even crispier.

The Foodi is large and heavy. It weighs about 20 pounds, and it’s probably about a foot and a half wide from handle to handle (give or take a few inches). If storage space is an issue in your kitchen, you may have a problem finding a place for the Foodi.

When using the pressure cooker, we found ourselves wishing we could remove the air frying lid.

On the plus side, the inner pot and accessories are dishwasher safe for easier cleanup. The Foodi base and air-frying lid are also easy to wipe clean.

The Ninja Foodi comes with a one-year limited warranty.

When a gadget tries to do too much and fit into too many categories, it sometimes ends up being mediocre across the board. This isn’t the case with the Foodi. It’s successful as both an air fryer and as a pressure cooker. It can cook virtually anything in one appliance, and you don’t have to transfer your foods into the oven to get that crisp. The main complaint we have about the Foodi is that its size, weight, and design make it a bit cumbersome and difficult to store. In terms of performance however, the Foodi thrives, and we are impressed with it overall.

If you only want an air fryer (check out some of the best here), you may want to go with Ninja’s 4-quart stand-alone air fryer or Cuisinart’s air fryer and toaster oven. Most of the air fryers and pressure cookers are cheaper and easier to store than the Foodi. Unlike those gadgets, the Foodi is going to serve multiple purposes though — air fryer, countertop oven, slow cooker, and pressure cooker — so it is the absolute best option for those looking for a device that can do all those things in one.

The Ninja Foodi base, air frying lid, pressure-cooking lid, and reversible rack are all solid and durable and they should last for years to come, provided you follow the care instructions. The inner pot, however, may scratch if you use metal utensils on it, and you may need to replace the ceramic non-stick pot overtime. A replacement ceramic pot costs $22 for the 6.5-quart model. You can also purchase a bunch of other cool additional accessories for your Foodi on the Ninja website like baking pans, roasting pans, and dehydrating racks.

Yes. The Ninja Foodi is an all-in-one gadget that does what it claims and does it exceptionally well. If you’re looking for a countertop cooking device that can air fry French fries and then turn around and slow cook a pot roast or pressure cook a cheesecake, you’ll love the Foodi.