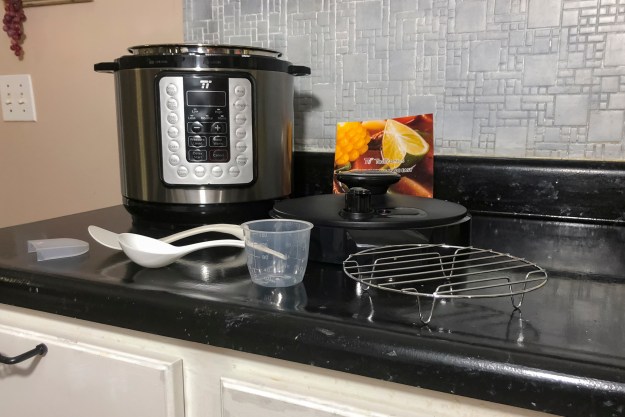 “With a fast heat-up time, TaoTronics’ pressure cooker gives the Instant Pot a run for its money.”

When you want to cook a frozen cut of meat without thawing it first but still want it to turn out tender and delicious, a pressure cooker is your best friend. It can cook a perfect roast, a whole chicken, a frozen block of ground beef, you name it. Nowadays, many of the electric pressure cookers on the market have added in even more functionality and convenience beyond pressure cooking. With the ability to sauté, slow cook, and even bake all in one device, it’s no wonder these cookers are becoming so popular.

Instant Pot is perhaps the most well-known electric pressure cooker brand, but there are many other brands available.

TaoTronics’ multi-functional 10-in-1 pressure cooker comes in six-quart (TT-EE006) and eight-quart (TT-EE007) models. Priced at $90 and $120, respectively, the versatile small appliance can cook just about anything that will fit in the pot.

We tested out the TaoTronics six-quart pressure cooker to find out how it stacks up against the competition.

TaoTronics 10-in-1 isn’t the fanciest pressure cooker out there. You can’t control it with your smartphone, it doesn’t connect to Amazon Alexa or Google Assistant, and it doesn’t have that sleek or techie look you might see in some competing pressure cookers (like the Mealthy MultiPot or the Mueller 10-in-1 pressure cooker). However, the device excels in many of the areas where it counts.

With 22 different button controls, you can choose from a variety of cooking options, adjust the pressure levels, and adjust the cooking times and temperature settings to fit your needs.

One of the biggest things people love about pressure cookers is that they shorten cooking times. You toss the ingredients in the pot, and your meal is ready shortly thereafter. However, a problem with some electric pressure cookers is that the heat-up time is way too long. When you have to double or even triple the time it takes to cook your meal to account for heat-up time, it takes away from the allure.

The TaoTronics cooker performed better, taking less than half of the time to reach full pressure than the Instant Pot.

The pot has a sterilize feature and a shield inside of the lid, which makes cleaning easy. After you remove the food and residue from the inner pot, you just add water, close the lid, and press sterilize. You can use the sterilize feature to pasteurize dairy products or sterilize flatware too.

The lid has a removable anti-block shield, which collects water and blocks foods from getting onto the lid itself. You can take apart the lid and wash the shield, which makes cleanup much faster.

The TaoTronics Pot offers some added perks over other electric pressure cookers on the market. It comes with an extra sealing ring, so you can replace the seal if it shrinks, tears, or loses its effectiveness over time. The Instant Pot Duo doesn’t come with a replacement sealing ring, nor do many of the other models.

The valve is more finicky than it is on most other models in this price range.

The inner pot and steaming rack are both durable and sturdy, and you get two different accessory spoons: One for soups and one for meals. The power plug is detachable, which makes storage a bit easier.

In addition to the accessories, the pot has a memory feature, which remembers your most recent settings for each cooking mode.

When cooking foods in the TaoTronics pot, we noticed that it doesn’t release food smells or heat into the air as much as other pressure cookers. You can steam a batch of onions, and barely notice any smell. The smell doesn’t hang around in the machine after cleaning either, as the design of the pot and the sterilize feature allow you to clean it more thoroughly.

Although the TaoTronics cooker has great features, it has a few issues too. The steam release valve, which you place in either a vent or seal position, is a bit tougher to manage than it is with some of the other pots. To seal any pressure cooker, you have to place the valve in the sealing position.

With the TaoTronics Pot, however, the sealing valve will turn past the seal position if you turn it with too much force. You must place it in exactly the right position, or small amounts of steam may escape during cooking. The valve is more finicky than it is on most other models in this price range. The valve on the Instant Pot, for instance, is more intuitively designed and much easier to place in the seal position.

We found ourselves calling it “the other Instant Pot” a while we were testing it.

Another quirk we found was with the lid, which is more difficult to close and lock in place than other models. The lid contains a small handle that’s about the size of a door knob as opposed to a large handle that goes all the way across the lid. The handle makes the lid more difficult to turn and control. We experienced a few frustrations when opening the lid as well. Sometimes the lid remained locked in place, even after the red indicator pin came down and indicated the lid was ready to open. We had to open and close the steam release valve again to fix the issue and get the lid to unlock.

From brownies to buffalo chicken dip to veggies

For some people, it’s hard to imagine making a cake or brownies in a pressure cooker. Will the texture be right? Will the baked goods get wet? Will it be too dense? We made brownies in the TaoTronics pressure cooker (using this recipe). We were pleasantly surprised with the results. The brownies were fudgy and moist, but not to the point where they seemed undercooked. They had a slightly different texture than oven-baked brownies, but in a good way. The brownies were evenly cooked throughout, without that over-baked hardness around the edges.

In addition to brownies, we also made buffalo chicken dip. The recipe was so easy. All we did was cut two pounds of chicken breast into chunks, place the chicken in the pot, pour about a cup of hot sauce over the chicken, add a half-stick of butter to the pot, add one-eighth of a cup of water to the pot, cook on high pressure for 20 minutes, and then allow the pressure to naturally release once the timer went off. After that, we shredded the chicken, added an eight-ounce package of softened low-fat cream cheese, added one-third of a cup of fat-free ranch dressing, added some low-fat cheddar and mozzarella cheese to taste (we added about one-half of a cup of each), and stirred until everything melted together. It was so good, we had to maintain enough self-control to avoid eating the entire batch.

Although it was tempting to make a bunch of junk food, we made healthier foods in the TaoTronics cooker too. Fresh steamed asparagus, broccoli, and green beans cooked within minutes, and they all had just the right amount of firmness. We didn’t end up with any waterlogged, mushy broccoli or any brown, limp green beans. The veggies came out green and delicious.

Not all recipes are created equally, though. The same goes for the recipe guides you find with these types of devices. The TaoTronics cooker comes with a recipe guide that includes starters, entrees, side dishes, and desserts to make in your pressure cooker.

On the front of the recipe guide it reads, “healthy meals made easy.” This insinuates that the recipes contained within the guide are all healthy options. While there were a few healthier recipe options, there were barely any recipes for fruits and vegetables, and most of the entrees didn’t contain enough vegetables to make a truly healthy meal. All the desserts in the guide were loaded with sugar, and there were no healthy dessert options. We decided to try the pot roast recipe anyway. It was good, but not great. The texture of the meat and potatoes was excellent, but the flavor was a bit bland.

The TaoTronics pot comes with a user guide, but it’s not very easy to follow. There’s no index, and the information in the guide is minimal. We had trouble finding out things like the warranty information, and we had to search online to find it.

All TaoTronics products come with a one-year warranty, provided you purchase the product from an authorized distributor (Sunvalley Brands). Customers can also register the product, and that will extend the warranty to 18 months.

The TaoTronics pressure cooker is a reliable, solid small appliance. It works as advertised, and it’s priced well considering how much it can do. It offers several benefits, like fast heat up time, easy cleanup, and lots of cooking modes and controls. The cooker has a few downsides, but none that we felt were deal breakers, especially for the price point.

Considering the Instant Pot has become such a well-known name in the pressure cooking world, some people may feel more comfortable paying the extra money for an Instant Pot. You can check out our full review of the Instant Pot Duo here.

If you want a pressure cooker that has a sleeker look, you might prefer the Mealthy MultiPot. At $100 on Amazon, the device is slightly more expensive, and it comes with nine cooking modes instead of 10, but it has a more attractive appearance.

Provided you care for it properly, the TaoTronics cooker should last you for several years. With its durable inner pot and extra sealing ring, you shouldn’t have to worry much about finding or paying for new parts either.

Yes. The TaoTronics pot is ideal for those looking for versatility, speed, and function, but don’t want to shell out too much cash.