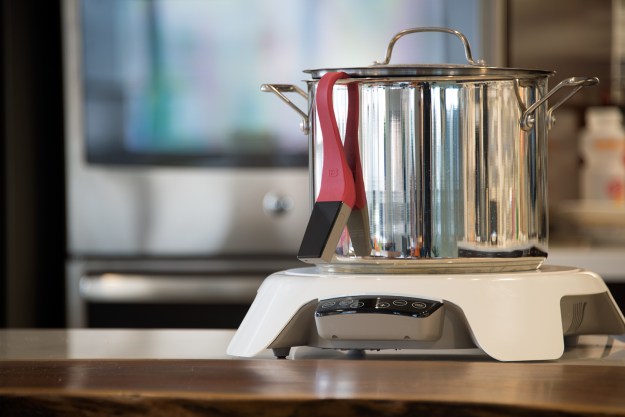 “The Paragon Induction Cooktop makes it easy for sous vide newbies to get professional results.”

Maybe you’ve been hearing about this whole sous vide thing, but you’ve been hesitant to buy a machine that costs hundreds of dollars just to try it out. Fair enough. GE FirstBuild’s Paragon is designed to let you dip your toes into the warm bath that is sous vide, while still giving you a piece of equipment that does other things. But this smart cooker, which pairs a Bluetooth temperature probe and an induction cooktop, makes the high-end-restaurant cooking style pretty unintimidating. How does it work? To paraphrase Teen Girl Squad, let’s get ready to cook sous good!

While it definitely looks like an improvement over the hot plate you may have smuggled into your college dorm, the Paragon definitely sticks out, even in a modern kitchen. If it were smaller, it might look sort of like a newfangled game console. The cooking surface is 12 inches in diameter, but the angled legs make the overall footprint five inches larger. It weighs about six pounds, so it won’t be terribly cumbersome if you decide to store it in a cabinet. Take note that because this is an induction cooktop, you’ll need to use magnetic cookware: A stainless steel pot or pan that’s between 6 and 11 inches will work just fine.

There are six buttons on the control panel and the display has a sort of whitish glow. The buttons allow you to control the temperature up and down, as well as use the included Bluetooth probe to precisely regulate temperature. The flexible silicone probe has a black-and-gray plastic rectangle that houses all the electronic components (don’t stick it in the dishwasher), and it magnetically clips onto your pot.

You can use the Paragon sans Android or iOS app, but the app does make things easier. For one thing, a whole range of cooking times for sous vide are all set up for you. Once you have the app installed, you pair it to the probe via Bluetooth. Then you name your device (mine is called Paradactyl), review a few food safety warnings, and get ready to start sous vide-ing.

Turning up the heat — to a specific degree

If you want skip the probe — or if you’re using the induction cooktop to sear meat — the direct mode lets you choose a heat level between 1 to 10. These relate to power levels, from 50 to 1,200 watts. Figuring which works best for what you’re cooking takes some trial and error, though the same can be said of any burner.

To use the probe without the app, you submerge the tip in the water, turn it on, and set your desired temperature on the cooktop. Hit start, and the probe and cooktop will communicate with each other to keep the water where you want it — though I found it could stray from the exact temp by between 1 and 2 degrees Fahrenheit.

You can use the Paragon sans Android or iOS app, but the app does make things easier.

With the app, you use the probe and choose from one of seven categories: beef, pork, poultry, fish, eggs, vegetables, and fruits. It will give a list of foods, and you can then choose how thick your hunk of meat is and how done you want it. Hit continue, and the cooktop will start heating your pot of water, alert you when it’s time to add your sealed bag of food, and let you know when it’s all cooked. The app displays a circle with a dashed ring that fills in with orange as your food progresses. Inside the circle, you see what time your food will be ready and the temperature of the water. One quibble I did have with the app is that it doesn’t tell you how much time has elapsed. You’ll have to remember what time you kicked off the Paragon if you want to change the cooking time on the fly.

The app is definitely not jam-packed with recipes. It’s more about guidelines. No matter what herbs and spices you have on your chicken, all that really matters with the sous vide portion of the cooking is the cut, whether it has bones, and how cooked you want it. Based on the beef, chicken, pork, eggs, and vegetables I made, the parameters GE based its settings on are pretty spot-on.

Still, it would be nice if there were some actual recipes included, though this is by no means a deal-breaker. There are countless places on the internet to find out how to sous vide almost anything, but Paragon’s sort-of competitor Anova, which makes an immersion circulator, has a lot of recipes that walk you through everything from bagging your meal to searing or grilling it after it’s done soaking in the bath.

As an induction cooktop, Paragon adds a little something extra. You’re not limited to using it as a sous vide machine, because you can also follow up slow-cooking a steak by searing it in a pan. You’ll use that direct mode button to use it as a standard induction cooker, meaning it uses an electromagnetic field to heat the pot or pan, not the cooktop itself. If you figure out the exact temperature where your soup is hot but not scorching, you can go ahead and set the Paragon at that temperature, insert the probe, and voilà: no more scalding the roof of your mouth.

If Paragon is meant to ease you into the world of sous vide, there could be a little more hand-holding. One of the freakiest things about the cooking process is how different your food looks, if you’re not used to it. A bloody steak is the way many people prefer it, but the sight of an extremely white chicken breast can induce panic, until you cut it open and see zero pink inside. I had to fight the urge to leave my scrambled eggs in longer to cook, because they definitely didn’t look like they do when I make them on the stovetop.

You’re cooking chicken at temperatures of 150 degrees Fahrenheit, so Taylor Dawson, product evangelist at FirstBuild, admitted it took him a while to get used to eating sous vide pork without worrying he’d contract trichinosis. But beyond that, you’ll probably find yourself hitting Google to find tips on how to make your Ziploc bag stay submerged and so forth. There are a few videos on FirstBuild’s YouTube channel showing you how to use the induction cooktop to make pork chops or steak, but novices might need more guidance.

That said, FirstBuild wants to foster its community of users. Dawson says he’s working with a candymaker to help her figure out how to use the Paragon to temper chocolate, for example. If enough enthusiasts buy and try the Paragon, its own cache of recipes might rival Anova’s.

If FirstBuild set out to make an easy way to get into sous vide, it succeeded. The interface and app are both straightforward, and the results are delicious. Though it’s not as precise as immersion circulators, steaks came out perfectly done, chicken was juicy, and veggies just the right amount of crisp. It was also nice to go from sous vide to sear on the same cooktop. However, the app is light on the recipes, tips, and tricks, so newbies will want to do some sous vide research.

What separates the Paragon from immersion circulators is that it’s an actual induction cooktop. That gives it some versatility as a device, especially if you’re going to leave it on your countertop — and shell out $299.

The best electric cooktops of 2022
The best oven ranges of 2022
The best gas cooktops for 2022
The best Instant Pot recipes you need to try
Anker 757 PowerHouse Sweepstakes: Win this awesome portable power station
I tried to ruin a camping trip with 130 pounds of batteries
The best Alexa Routines for every lifestyle
Walmart Plus Free Trial: Get a month of free delivery and cheap gas
Best Cordless Vacuum Deals: Sales you can shop now
Best Black Friday Ring Doorbell deals: What to expect
Best Blink camera deals for September 2022
The best robot vacuums with mapping technology
The best video doorbells for 2022