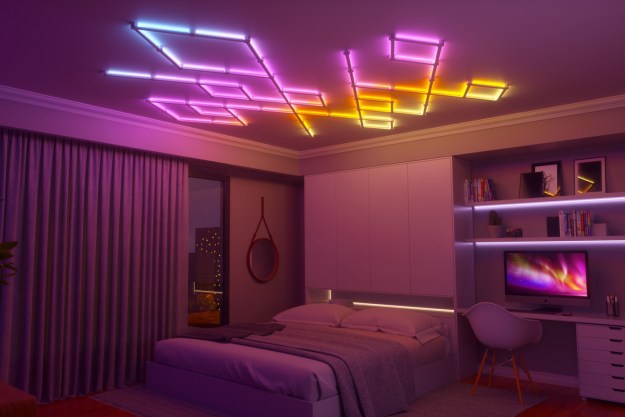 “The Nanoleaf Lines are an excellent product, with incredible amounts of versatility in design and pattern creation.”

Smart lighting is one of the first ways many people experience smart home technology. Simple smart bulbs make it easy to turn lights on and off, but there is so much more to smart lightning than just convenience. Companies like Nanoleaf have transformed the perception of lighting from a utility to a decoration. Just look at the Nanoleaf Canvas, the Shapes, or even the original Aurora. They have become staples in most any Twitch streamer’s setup, or just a way to add a certain flair to a home.

Now, the company has launched a new product that falls perfectly in line with its aesthetic theme called the Lines. These new lights are basically like glow sticks for your wall — a series of dual-zone lights that connect to one another and can be arranged in a variety of shapes. The package includes a suggestion of potential shapes, but the Lines connect through hexagonal hubs. This means there are far more possible options than before.

The Nanoleaf Lines are relatively easy to install. Each Line attaches to a mounting connector. The connectors each have six possible areas for the Line to slot into. You can place a lot of lines coming from a single connector, or use the connector as an endpoint for your design. The only requirement is that the controller cap, a special mounting connector with physical controls, connects to the configuration at one point. I placed it at the end of the design, closest to the power outlet.

It takes only slight pressure to snap the Lines into the connectors. Once connected, you cover the connectors with a cap that secures the Lines in place. The main problem with installation arose from the caps. There doesn’t appear to be any particular way to snap them in, at least at first — but after closer inspection, it’s clear the caps are meant to slide into the connectors in a specific way. The caps feel slightly flimsy, which made me afraid to put too much pressure o it for fear it would break.

I suggest connecting the Lines on the floor and then securing them to the wall afterward. Each connector cap has an adhesive strip on the back. Once you peel this strip off, you need to press it to the wall for roughly 30 seconds. Make sure the system is even, because there is no easy way to remove it from the wall. The caps disconnect from a base piece. Although you can remove this base piece from the wall, the adhesive doesn’t work as well a second time.

Connecting the Lines to smart assistants is a simple matter. Nanoleaf Lines are compatible with HomeKit, Amazon Alexa, Google Assistant, Samsung SmartThings, and IFTTT. Alexa automatically picked up the Lines and added them after setup.

One thing Nanoleaf has long been known for is just how incredible its lights look, and the Lines are no exception. Each Line has dual-zone lighting, capable of displaying two different colors at once. Combined with the motion effects, this leads to a near-limitless number of scenes and patterns that create breathtaking effects on your wall. I counted 19 built-in scenes ranging from Cotton Candy to my personal favorite, Kaleidoscope. Each of these scenes looks different, though some are pretty straightforward, like the Daylight scene. Lines are perfect for when you want a bit of illumination on your wall.

Other scenes, like Starry Sky, look very much like their namesakes. You can almost see the stars shooting across the dark of the sky. If you don’t find a scene that you like in the premade list, you can swap to the Discover tab and browse through literally thousands of user-created scenes. And if you still don’t find a scene that you like, the Scene Creator makes it easy to create a scene of your own. Although it isn’t the most intuitive system to use, Nanoleaf’s step-by-step walkthrough helps even complete beginners figure out how to create their own look.

The Discover tab is split into three sections: Scenes, Playlists, and Motions. The Scenes header is where users can find custom scenes. The Playlists tab consists of collections of different scenes that transition from one to the other and are all user-created. It’s particularly useful at this time of year, as there are both Halloween and Fall playlists.

The coolest aspect is in the Motions header, though. This includes a collection of differen, moving scenes like Rhythmic Northern Lights or Meteor Shower. These create a completely different effect and can provide anything from high-energy transitions to more meditative experiences.

The Screen Mirror function also really stands out. It lets you connect your Lines to a computer monitor or TV with the Nanoleaf Desktop App. It makes a viewing or gaming experience more immersive. Match Mode brings a one-to-one match of the colors on screen, shifting quickly and rapidly to keep up with the action. Melt Mode is a more subtle transition, better suited for cinematic experiences.

The Nanoleaf Lines stand apart from other products because of their shape and design. They’re capable of displaying 16 million different colors, with two colors per zone. There will also be devices called Flex Connectors, which will allow you to extend your design around corners. According to Nanoleaf, these will be available in December.

Outside of these features, the Lines operate much like any other Nanoleaf product. If you’ve used one, then the Lines will feel familiar to you. You can schedule times for the lights to turn on and off, and connect the Lines to other devices through the use of IFTTT. You can also activate a feature for Auto Brightness, where a built-in sensor adjusts the light level based on the ambient light in the room.

A major difference can be found in the setup, especially through the use of Thread. Thread makes installation and setup incredibly easy, and it indicates what the future of smart home technology could be like if more products adopt the technology.

The Nanoleaf Lines are an excellent product, with incredible amounts of versatility in design and pattern creation. The lower price point is also more appealing. Priced at $200 for the Starter Kit and $70 per expansion, users can create expansive designs without breaking the bank. Whether you’re looking to add a bit of grown-up décor to your home or you want the coolest streamer setup anyone on Twitch has ever seen, the Lines are a great way to do it.

The Nanoleaf Lines have a unique shape. While there are alternatives on the market, no product provides the same design options. You could look for alternative products in something like the LIFX Beam, but the Lines are in a league all their own.

The Lines are LED, which means they have a long life span. The plastic of the Lines might weaken over time, as it doesn’t feel as strong as I would like. With careful handling and use, though, these lights should last for years to come. Unlike its competitors, Nanoleaf offers a two-year limited warranty that covers it against defects.

Absolutely. The Nanoleaf Lines are unique in appearance and look great on the wall. They’re well worth the investment, with only a few minor irritations with setup.