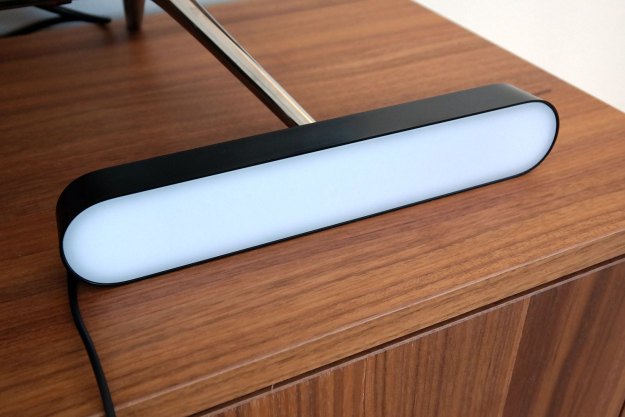 Philips Hue smart lighting may have been around more than six years, but this year, the Dutch giant has gunned its innovation engine, launching a swathe of unique devices to illuminate your home and garden in new ways. They include a new outdoor range featuring the fabulous Philips Hue Calla pathway light alongside elegant indoor lamps, light strips, and more.

The Hue Play Light Bar may well be the most interesting item in a growing range of luminaires. Priced at $70, with a two-pack available at $130, this compact lamp is designed for use behind your TV, washing your walls with a choice of 16 million colors.

Of course, creating beautiful TV backdrops isn’t new to Philips. Owners of the company’s Ambilight TVs, launched back in 2004, have benefitted from such a feature for many years. LEDs embedded in the rear of those TVs project light on walls, with colors matching the on-screen action. Philips reckoned it created “a more immersive viewing experience,” and as previous owners of Ambilight TVs, we agreed.

Having sold off their TV division some time ago, the opportunity to recreate elements of the Ambilight experience seems like a great move.

Unlike some of the more stylish luminaires in the Philips Hue range, the Play Bar is quite basic. Rather than the hardware making an interior design statement, the Play Bar relies on its output for impact. Clad simply in a black or white plastic surround with a frosted white front, the device supports a versatile selection of mounting options.

You can place the lamp directly on top of your TV cabinet, using its flat base, or an angled, rubberized rear projects light upwards. Alternatively, stands included in the box allow you to mount the Play Bar in the horizontal or vertical orientation. For the cleanest look, self-adhesive strips and circular mounts can be used to fix the lights directly to the rear of your TV. It’s likely you’ll wish to try different mounts and positions for the Play Bar to optimize the ambience. Switching between mounts is easy, but Philips has opted for an easily-losable hex key for the mounting screws, which makes life a little less simple.

Otherwise, installation is straightforward. The included power adapter can accept up to three devices, which keeps your TV cabinet tidy. It means you can add the $60 Play Light Bar extension pack, if desired, without requiring another adapter. That said, it’s pretty large, and the pins are oriented badly. That means that the adapter blocks numerous outlets on a power strip. On the plus side, there’s plenty of cable length available to stretch either side of even large TVs.

A riot of color

Getting up and running with Hue Play isn’t too tricky – particularly if you only wish to take advantage of its base features. As with all Philips Hue lamps, you will need a Hue bridge ($60 or bundled with a starter kit) to connect the Play Light Bar to your home network. Configuration is managed through an accompanying smartphone app (iOS/Android). We had no issues discovering the lamps, which were available for use in a matter of seconds.

Try different mounts and positions to optimize the ambience.

Light output is rated at 530 lumens, much lower than the maximum 806 lm emitted from a regular Hue bulb but more than acceptable for accent lighting. With a selection of 16 million colors, it’s simple and great fun to experiment with different colorscapes behind the TV. A comprehensive array of color and brightness settings provide granular control, while predefined scenes offer a variety of palettes to try. Unlike earlier generations of Philips Hue lights, we encountered no issues with color accuracy – greens and blues were deep and vivid.

Delve a little deeper into the Hue app, and you’ll find a selection of more innovative tools for light control. You can select color palettes from your favorite photos, set timers, and trigger lighting at sunset and sunrise. Voice control works brilliantly with both the Google Assistant and Amazon Alexa. Advanced smart home managers will also love a swathe of recipes available at IFTTT.com, which connect your lights to a world of third-party services and devices.

A new light — with some effort

If you’ve already invested in Hue at home, you may be wondering what makes the Hue Light Bar different, aside from a slinky form factor and novel mounts. The answer is a feature called Hue Sync. Available for some time as an experiment in the Philips Hue app, Hue Sync allows you to synchronize your lights with games, videos or music played on a Windows 10 PC or MacOS computer.

It’s the company’s attempt to recreate some of that Ambilight TV experience, albeit in more fragmented way than anyone would like. If you’re the guy that still has a dedicated HTPC hooked up to the big screen TV, the effect is seamless. Everyone else has a little work to do, but the results can be mesmerizing.

With a selection of 16 million colors, it’s simple and great fun to experiment with different colorscapes behind the TV.

First, you’ll need to download a standalone Hue Sync app on your computer of choice, then pair the device with your Hue bridge. On Windows, we found installation to be straightforward, but on Mac OS High Sierra, we were plagued with prompts to tweak numerous low-level security and accessibility settings required for compatibility. That’s not the fault of Philips, but it remains painful.

From there, head back to the Hue mobile app to create what they call an “Entertainment area” – a defined cluster of lights within a room surrounding the TV. Once you’ve picked out the lights to use with Hue Sync, you drag and drop icons on screen to configure their position. A couple of diagnostic tests later, and the feature was ready. As setup experiences go, there was more heavy lifting than we liked, and we soon realized that our work was not yet done.

Syncing to the big screen is a challenge

Lights pulse to a palette and intensity of your choosing when you stream music via Spotify or play on a local app like VLC or YouTube in a web browser. We were impressed by the feature’s low latency, which ensured light effects were synced tightly to beats.

While bringing rooms to life by combining our favorite EDM tracks and Hue Sync’s intensity settings, we also enjoyed the beautiful ambience created with slower music from artists like Nils Frahm, Slow Meadow, and Solar Fields. Dial down intensity settings to Subtle, and Hue Sync does a brilliant job of detecting and displaying light, shade, and texture in your music selection. It’s a great way to explore and experience your music collection in a new light.

Prepare for some network display experimentation and have an HDMI cable handy for your laptop. 2005 just came calling.

But if you don’t have your PC tethered to the big screen, syncing Hue Play can be a significant challenge. When playing videos directly on the device, we found Hue Sync does a great job, accurately replicating dominant colors displayed on screen. An audio option can also be toggled, which further adapts lighting to voices, music, and effects such as explosions. Replicating that experience on the big screen, however, is tough without cables.

Hue Sync will work with screen mirroring tech like Chromecast, Miracast, and AirPlay. So, when you mirror your PC’s desktop to your TV (which is the only mode in which it works), you can sync your lights with the on-screen action. However, streaming your desktop can bring a wireless network to its knees, particularly if you’re bouncing content from a network drive. Introduce network latency, and a concept anchored on synchronization simply disintegrates.

As such, if you’re excited about the potential of using Hue Sync for movie night, prepare for some network display experimentation, and have an HDMI cable handy for your laptop. The year 2005 just came calling.

The potential of immersive gaming support, yet to be fully realized

The prospect of using Hue Sync in gaming had us salivating. It’s no secret that RGB lighting is big news in PC gaming and this year, devices like Logitech’s G560 gaming speakers, NZXT’s Hue 2 lighting system, and Razer Chroma are striving to create more immersive gaming experiences through lighting. At launch, Philips Hue works with Razer Chroma devices to allow lights to replicate the on-screen action without the need for the Hue Sync app. For other setups, Philips promises their app will capture in-game effects (for PCs and Macs, not game consoles) and translate them immediately to lights such as Hue Play, or indeed, any Hue bulb.

In our tests, performance was inconsistent. Together, Hue Sync and Play can do a stellar job at replicating the colors of static, desktop backgrounds with accurate color sampling and little latency. Fire up a game, however, and the experience fragments. At its best, the experience is stellar. Forza Horizon 3 lights up the room with the dusky orange sands of the Australian outback, golden yellows of Byron Bay beaches and the cold, frosty hues of Blizzard Mountain.

Elsewhere, problems abound. In Overwatch, we experienced repeated issues with the right lamp switching off entirely during gameplay (even in light areas). On other occasions, it worked well. Other games we tried, such as The Witcher 3 and The Division suffered periods where the Hue Play’s color output simply didn’t change, despite the action on screen.

Adoption by smart TV platforms and media apps, like Plex, is much needed.

Overall, Hue Play feels like a work in progress – an attempt to showcase the potential of Hue Sync and an emerging role for Philips Hue in the realm of home entertainment. When the hardware, software, media and the services required to stick the experience come together, the Hue Play light bar really shines.

But there’s more work to do to refine Hue Play and its associated platform –  it’s likely to be a team game. Adoption by smart TV platforms and media apps, like Plex, is much needed. Removing the reliance on a PC-hosted sync app would ensure an easier and more seamless music and video experience on the big screen. In gaming, collaboration with more hardware manufacturers like Razer and continued refinement on major titles will add consistency and could position Hue Play as a must-have accessory in both the living room and den.

The Philips Hue warranty guarantees products are free from defects in material and workmanship for two years.

Philips Hue Play is a fascinating debut in an emerging product category. On this showing, it’s not quite ready for mainstream users, but it’s definitely one to watch.

It’s early days for synchronized entertainment lighting, with manufacturers testing the market with various devices predominately focused around gaming PCs. If you’re keen to make a leap, then check out Logitech’s $200 G560 gaming speakers, with embedded rear-facing RGB LED lights. PC builders can also take a look at the upcoming $75 NZXT Hue 2 (no relation) RGB Lighting Kit. Remember too that Hue Sync works with any Philips Hue color RGB bulb, so if you’re already invested in Hue, you can play with the possibilities today.

Six years in, Philips Hue is a true leader in the smart home lighting market. Admittedly, Hue Play is at the cutting edge of the company’s range, but we have no doubt it’ll be supported.

PC media enthusiasts that are happy to tinker with device and network settings will have a riot. Everyone else, wait a while before jumping in, and have a play with the Hue Sync app instead. It works with any Philips Hue bulb.