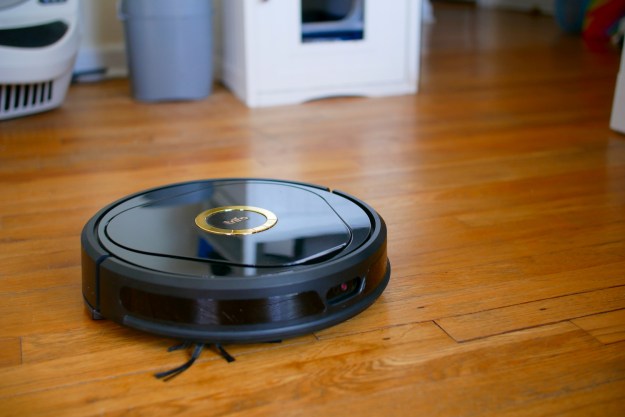 “The Trifo Lucy can keep an eye out on your home, but it may not do a great job of cleaning it.”

Trifo’s Lucy robot vacuum first caught my interest during CES 2020, marking one of the first robot vacuums that were poised to take the category into a new direction. What made it stand apart from the crowded field was its ability to see its environment with an embedded camera right at the front of the bot — with the promise of avoiding trippy wires, challenging furniture corners, and the dreaded poop on the floor.

In addition to obstacle avoidance, the camera is meant to offer peace of mind when you’re away because it effectively doubles as a security camera. Therefore, it’ll watch out for any motion and alert you if something is amiss. Even though we’ve seen other interpretations in the last year, I’m eager to find out if it offers a more practical solution. Although, that won’t matter if it can’t clean well.

An example of lidar’s superiority

Reading into the specs of the Trifo Lucy, it seems like a promising bot that does double duty in being a cleaner and babysitter. While there’s plenty of jargon about artificial intelligence (A.I.), 1080p HDR video, Alexa integration, night vision, and 3D obstacle avoidance, I can’t help but mention that all of that tech does nothing to divert my attention from the fact it’s not as efficient at cleaning.

Sure, it has no problem going up and down my hardwood floors in open spaces, but tight quarters and narrow hallways prove challenging despite all the tech that’s onboard. What’s most apparent is that it doesn’t use a lidar (light detection and ranging) sensor, a common feature used by many mid- to high-range robot vacuums nowadays. Instead, the Trifo Lucy’s navigation hinges on a combination of its front-facing 1080p camera, cliff sensors underneath it, and depth sensors.

Its performance is a clear example of why lidar-based vacuums are so effective. Even though it does a good job at avoiding clutter, including charging cables on the floor that still plague many bots, it’s puzzling to see jerky movements whenever it tries to hug walls in an attempt to clean in a straight line. Making matters worse, it’s a navigation struggle with tight quarters — it simply just moves in random directions. However, it did avoid the fake poop I placed on the floor. At least you know it’s smart enough to avoid that!

Maintenance is a must

Cleaning performance is average at best; it doesn’t come close to being the most efficient or proficient at vacuuming. First of all, it’s not that good with carpets despite the 3,000 Pa suction power. It’s mainly due to the bristle brush on its underside, which catches clumps of tangled hair in the process. While superficial debris gets picked up, carpets don’t ever get that deep clean feel. Meanwhile, its side sweeping brush also suffers from tangled hair — frequent maintenance is required to keep it in tip-top shape.

Thankfully it performs better with hard floors since its side sweeping brush doesn’t rotate too fast — ensuring that dirt and debris don’t get flung in all directions as it sweeps. Surprisingly enough, the Trifo Lucy’s wheels handle humps and dividers with ease, but I still had to rescue it from getting stuck under a nightstand.

Using the Trifo app, I appreciate how it shows a map of my apartment, along with icons that indicate obstacles it came across during its cleaning. However, I really would’ve liked to see an accompanying photo of those obstacles — similar to how the Roborock S6 MaxV does it. And finally, it took three separate cleaning sessions for the Lucy to produce a proper map layout of my apartment, which can be used later on to set up no-go zones that act as a virtual barrier.

All told, it’s an average performer that may require a couple of passes before you’ll be confident that it’s clean.

Don’t bother with the mopping

Yes, there’s a mopping function with the Trifo Lucy, but it’s a laughable implementation. That’s because of the small water compartment and disposable pads you have to use. Due to the mounting bracket for the pads, it never seems like the pad is touching the floor while mopping — plus, there’s no way to adjust the flow of the water onto the pad. Rather, it simply relies on gravity for that.

Security guard when you’re not at home

Now, if there’s one saving grace for the Trifo Lucy, it has to be its security guard function. It’s basic for sure, especially considering that the camera detects all motion — regardless of what it is, and doesn’t classify it in the app.

Cleaning performance is average at best.

Unlike other robot vacuums, you’ll need to be more thoughtful about the placement of the charging base. That’s because it can sense motion while it charges in the base, including in the dark because it features night vision. Therefore, if you have the base placed so that the robot is in view of the front door, it’ll be able to capture anyone that enters.

You can view all the recordings through the app, but what’s missing is two-factor authentication to really add more peace of mind with privacy in the home — so I hope it’s something that becomes available in the future. Another missing feature I’d like to see is an option for a patrol mode of sorts, where the Trifo Lucy can patrol a predetermined path. It’s a decent secondary function that’s actually practical, but it’s still tough to overlook its other flaws.

I had high expectations for the $500 Trifo Lucy. In the year since its unveiling at CES 2020, we’ve seen a couple of other robot vacuums that show us the next evolution for robot vacuums. Unfortunately for Lucy, its inability to efficiently clean makes it a tough consideration when you have other bots that do it better — while also offering that security camera functionality. At the end of the day, a robot vacuum’s success hinges first and foremost on its cleaning performance. I cannot say with full confidence that the Trifo Lucy is capable of that.

Frequent maintenance cleaning is absolutely required here due to how its brushes get easily tangled. Plus, cleaning its sensors and cameras will also help. There’s a one-year limited warranty on just the parts only.

You’ll have to fork over $700 for the Roborock S6 MaxV, but it’s very similar to the Trifo Lucy because it’s a 2-in-1 vacuum combo that mops, offers lidar-based navigation, and an A.I.-assisted camera for superior obstacle avoidance. And oh yeah, its vacuuming and mopping performance is superior in every way.

No, even though its security camera function does make for an enticing package. If it can’t clean well, its purpose in being a robot vacuum is pointless.