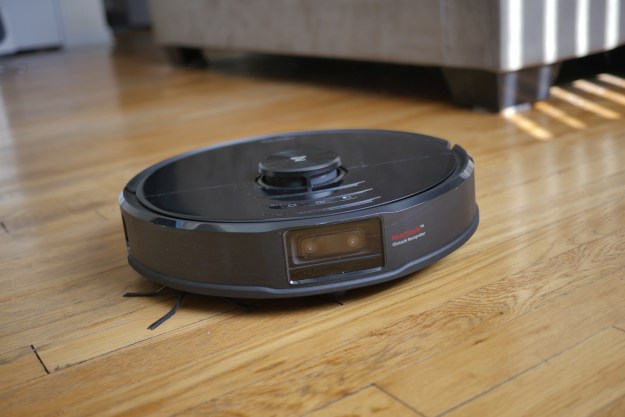 “It's not perfect, but the Roborock S6 MaxV can detect and avoid clutter while it's cleaning.”

Robot vacuums save time, which is something we could all use. In the world of robot vacuums, innovations have continually tacked on more conveniences, including bots that empty their dustbins on their own and two-in-one models that mop. Despite all these advancements, some lack the smarts to intelligently avoid clutter around the home.

The Roborock S6 MaxV is hoping to change that, thanks to a pair of cameras that are powered by Reactive AI obstacle recognition and a Qualcomm chip. Can it actually dodge and weave? Or does it still run headfirst into trouble?

Giving the Roborock S6 MaxV a whirl for the first time, I was anxious to see if it could intelligently avoid or clean around obstacles.

It certainly looks the part. First, there’s an elevated disc on top that tucks away the bot’s lidar navigation system, which is used to map rooms. From there, it proceeds to vacuum floors, while two cameras in front capture images at 30 frames per second (FPS) for obstacle avoidance.

Typically before cleaning, I spend a bit of time doing some ‘precleaning’ — lifting pet bowls from the floor, putting away clothes, and making sure charging wires from all my gadgets are neatly tucked away. The new Roborock, however, is aiming to eliminate this process.

I was happy it managed to clean around a small box I left in the middle of the floor. In another instance, it slowly crept up to a sneaker, then proceeded to vacuum around it.

To really test out its ability, I left out a few Whoppers on the floor, to simulate what might happen if your pet left a surprise on the floor. With the first two piles, it cleaned around them perfectly, but it didn’t with the third — running over them instead. So, it might avoid your four-legged friend’s accidents … or it might not.

Robot vacs also have trouble in closed, tight spaces. They often wedge into a position they can’t leave. With a  Qualcomm APQ8053 processor working behind the scenes in conjunction with its stereo cameras, I was hoping the Roborock S6 MaxV would avoid such complications.

I was disappointed to see it get stuck in the small crevice underneath my entertainment center, forcing me to swoop in to save the day. I was even more annoyed that it had trouble recognizing the beveled edge of my side table — so it kept dancing back and forth as it moved along that beveled edge. This actually isn’t uncommon, as all such vacs have difficulty cleaning around these oddly shaped fixtures.

I was disappointed that it get stuck in the small crevice underneath my entertainment center.

Overall, object detection seems hit-or-miss. The Roborock S6 MaxV didn’t seem smart enough to operate without supervision. However, it may get smarter with future firmware updates that tweak its learning abilities. Other robot vacs don’t have this luxury, including pricier bots like the iRobot Roomba S9 Plus and Neato D7. They’ll simply run over anything in their path.

Thanks to its lidar navigation system, the Roborock S6 MaxV is an efficient cleaner. Seriously, it doesn’t waste any time. It tends to follow a ‘S’ pattern when cleaning open spaces, swooping through them for quick and efficient coverage. That’s the beauty of the technology, which is employed by some other vacs in the $500-plus range, like the Eufy RoboVac L70 and Ecovacs Deebot Ozmo 930. It’s practically a given for these vacuums to perform well thanks to onboard lidar navigation.

Corners are no match for it either, because the single rubber brush sweeps up dirt toward its underside brush. It’s worth noting that it’s rubber, unlike the bristle brush used by most vacuums, so it holds up longer. Adding to the exceptional cleaning prowess is the model’s 2500 Pascals (Pa) of sucking power, which is the strongest ever in Roborock’s line. It collects just about anything in its path.

Carpets get a solid clean thanks to the strong suction power, but long pieces of hair can sometimes bunch up and get tangled in the roller. Luckily, it can be easily removed, as there’s a cleaning tool to clear out those tangles.

In addition to vacuuming, you can also use the S6 MaxV to mop by attaching the included pad and filling the removable water reservoir on the back of the robot. The best part about this is that it saves time on having to do separate cleanings, so it’ll vacuum and mop at the same time. While collecting debris through the front, it’ll mop those vacuumed surfaces as it moves along. The mopping performance is no different from other vacs I’ve tested. Water squirts from underneath and is subsequently distributed evenly to the floor by the pad as the robot moves forward.

The Roborock S6 MaxV is an efficient cleaner.

I’m impressed by how well it’s able to clean rooms. In places that may have more debris, like near my cats’ litter box, it requires a second pass to fully cover the area, but that’s all.

Due to its efficiency, it’s able to clean my entire apartment without having to recharge — it cleaned for 50 minutes straight with plenty of battery to spare/ Battery life is better, too, than many of its rivals — it’s rated for 180 minutes, which would be more than enough to vacuum and mop up my place twice over. By comparison, the iRobot Roomba i7 has a maximum runtime of 75 minutes.

The Roborock app offers an abundance of useful tools and insights about the bot vac’s cleaning. I’m particularly amused by the map it creates for my apartment. It intelligently discerns rooms on its own. I can clean a particular room by selecting it on the map.

It also shows what objects it encounters while cleaning. Remember the “poop” it was able to detect? Well, it’s clearly visible where it was found on the map. Small details such as this make the app experience better than others I’ve tested. It’s not often that an app can help me track down a missing pair of socks.

The app provides insights to its maintenance, indicating how many hours are left before the filter, side brush, and main brush need to be replaced or cleaned.

While the Roborock S6 MaxV can clean on its own, I can manually take full control of the robot vac using the on-screen controls with the app. It’s like operating a radio-controlled toy. Useful? Maybe not, but it’s certainly a fun extra.

Now, if the app’s not your thing, there’s always voice control. It supports Google Assistant and Amazon Alexa. I can command it to start cleaning — or return to its charging base.

There’s still work needed before I can trust this robot vacuum to clean on its own, without any supervision on my part. On the bright side, it’s a two-in-one bot that can vacuum and mop — something it does very well. It’s pricey at $749, but it’s better than another camera-wielding robot vac, the $1,150 Deebot Ecovacs 960.

Yes, but you won’t find many that pack cameras for object detection. The Deebot Ecovacs 960 is a similar option, but more expensive.

Roborock’s S5 is a combination vacuum and mopping robot that costs less than $500. It’s worth a look if you don’t need (or want) high-end room-mapping and object-recognition features.

There’s a lot of tech crammed into this one, so it would be no surprise for people to be concerned about its longevity. As long AS proper maintenance is performed, such as removing tangled debris from its brushes and cleaning off its various sensors, the Roborock S6 MaxV should operate in tip-top condition. In the event of a manufacturer’s defect, there’s a 1-year limited warranty that covers parts and labor.

Yes, if only for the fact that it’s much more affordable than its closest rival.