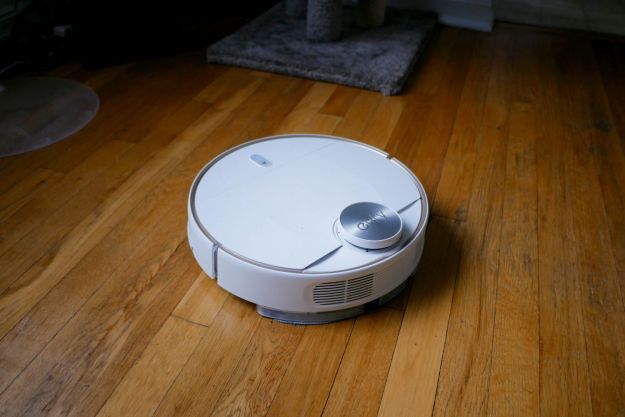 “The Eufy RoboVac L70 is an affordable 2-in-1 robot vacuum that goes the right direction.”

Anker’s sub-brand, Eufy, has been making a ruckus lately with its line of affordable robovacs. Its last two models have been superb, but the company is looking to step things up with its latest model, the Eufy RoboVac L70 Hybrid. This is an ambitious endeavor, one that should increase the company’s credibility and make it a serious player in the space, namely because it can mop floors. Given the added versatility, it only needs to prove it’s smart at tackling mopping to give its contemporaries something to worry about.

What made the two previous Eufy robots we reviewed, the RoboVac 11S Max and 15C Max, so notable was that they featured low-profile designs that allowed them to clear tight spaces. That’s no longer the case here, as the RoboVac L70 Hybrid’s increased height of 105 millimeters means it won’t be getting underneath couches to clean places that aren’t as accessible.

Gone also is the modern, tempered-glass styling that made Anker’s previous robot vacuums some of the more attractive at their price points. Instead, the 11S Max relies on a more conventional design with white, all-plastic construction. Thankfully, the matte finish makes it less prone to smudges and other debris. What it lacks in style, however, the RoboVac L70 Hybrid makes up for with an efficient cleaning routine.

It won’t be getting underneath couches

Finally, a smarter way of cleaning

While we were satisfied with the cleaning performance of the RoboVac 15C Max, our only critique was that it wasn’t particularly smart in doing it. Yes, it managed to suck up all sorts of dirt and debris with its dual brushes and underside roller, but it relied on the older bump-and-move method of navigation, which extended cleaning times considerably. With an upgraded laser mapping system, the RoboVac L70 Hybrid is far more proficient at cleaning than its predecessors.

This is the first time Anker is introducing laser navigation to its line of robovacs, and the RoboVac L70 Hybrid features the best cleaning routine the lineup has seen to date. The device cleans more efficiently than previous models, and utilizes a methodical S-shaped cleaning pattern instead of bumping into walls and adjusting course each time. In open spaces, it follows this pattern to ensure that every inch of your floor is vacuumed.

The more advanced navigation doesn’t stop there, either, given you can set virtual boundaries via the accompanying mobile app. We found it especially useful for areas you don’t want the vacuum to touch, such as pet areas with water bowls or messy areas in general. Adding these no-go zones helps the RoboVac L70 become more efficient at cleaning. It still falls victim to the occasional lockup when it accidentally grabs wires or other objects, however, so there’s still some level of monitoring required. Docking  wasn’t much of an issue here, often requiring at most two passes to connect properly, but I’d highly recommend attaching the waterproof pad to the charging station so that it stays in place better.

Through the EufyHome app — which is available for Android and iOS — you can view the L70’s cleaning history, set schedules, manually guide it, and update the firmware. Much like the RoboVac 15C Max, the L70 also features Wi-Fi connectivity, allowing you to make use of virtual assistants like Amazon Alexa and Google Assistant.

No worries with vacuuming

Despite only having a single, front-mounted brush, the RoboVac L70 Hybrid delivers when it comes to cleaning performance. In fact, it has the strongest suction to date in Eufy’s lineup with its 2200Pa of power. It helps, too, when the underside roller brush rotates to funnel debris, pet hair, and crumbs into the bin. The sensors around the unit also allow it to hug walls tightly and turn corners with ease, aiding performance. Unlike previous RoboVacs, the collection bin is accessible via the top lid, which must be removed alongside the washable filter to empty the bin completely. There are more steps involved this time, so cleanup isn’t as quick.

Mopping with water only

New to the Eufy fold is mopping, a feature that adds more depth to an otherwise predictable robot vacuum. The mopping plate attaches to the rear underside of the RoboVac L70, and makes use of a removable microfiber cloth. Before mopping, you need to fill the compartment in the collection bin with water. Once that’s done and the mopping attachment is fastened on, the device automatically goes into mopping mode. It vacuums as it does normally, but dispenses a little bit of water onto the cloth when doing so.

From here, the RoboVac L70 Hybrid will go about its normal cleaning routine — all while mopping the floor and leaving a trail of slick surfaces behind. The water does well to give hardwoods and tiled floors that clean feel, but since it doesn’t utilize any sort of detergent, it doesn’t necessarily make them germ-free. You’ll also want to set up no-go zones over rugs and carpeted areas to prevent the RoboVac L70 Hybrid from attempting to cover such terrain while in mopping mode.

As for battery life, the L70 Hybrid touts an impressive 2.5 hours of performance on a single charge. For larger homes, this means it will be able to clean for much longer without having to recharge in between cleans.

The Eufy RoboVac L70 Hybrid is supported by a 30-day money back guarantee, as well as the standard one-year limited warranty.

Most 2-in-1 robot vacuums cost a pretty penny, which is why the Eufy RoboVac L70 Hybrid is appealing at a moderate $550. It’s the company’s most expensive robovac to date, but it’s also its smartest thanks to its room mapping technology, laser navigation, and capable mopping capabilities. It offers plenty of value, with performance to match.

If you’re looking for the ultimate 2-in-1 robot vacuum to tackle both cleaning and mopping, then consider the Ecovacs Deebot OZMO 950. It’s more expensive given the price tag hovers around $900, but you’re getting an exceptional cleaning experience out of a single robot vacuum.

Want more options? Check out the best robot vacuums of 2020.

The Eufy brand continues to grow within the robot vacuum space, proving that the company’s lineup is just as reliable as its competitors. With proper maintenance, the RoboVac L70 Hybrid is likely to last for a long time. Pair physical upkeep with routine software updates designed to enhance the robovac’s cleaning performance and routines, and it’s bound to stay in tip-top shape for years to come.

Yes. It’s the most efficient and capable Eufy RoboVac available, so it’s worth a buy if you’re looking for a decent 2-in-1 that won’t break the bank.