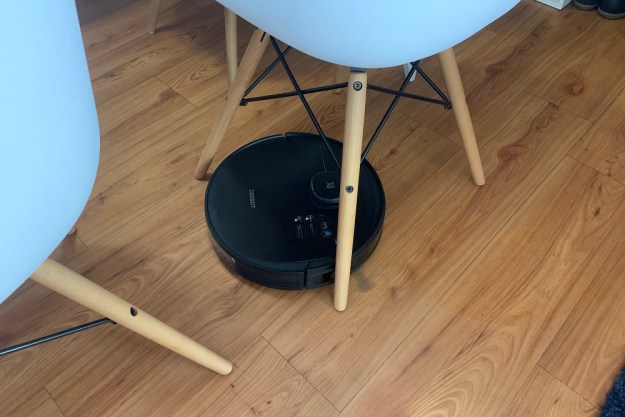 You can find a robot vacuum pretty easily these days, and you’ll pay anywhere from $100 for a budget robot to upwards of $1,000 for a robot vac with all the bells and whistles. Ecovacs, a brand known for making reasonably-priced-yet-high-tech robot vacuums, recently came out with a new 2-in-1 robot vacuum and mop combination. It’s called the Ecovacs Deebot OZMO 950, and it claims to be the most powerful Deebot so far. I tested the OZMO 950, and here’s my take on the device.

The Ecovacs Deebot OZMO 950 comes with a lot of accessories. In addition to the robot and docking station, it comes with four side brushes (two for immediate install and two backups), a pre-installed main brush, a direct suction option you can swap out for the main brush, a water reservoir, a cleaning cloth plate, a washable and reusable microfiber mopping cloth, disposable mopping cloths, and two washable, high-efficiency filtration systems (one pre-installed and one backup).

Setting up the OZMO 950 was simple, and the process took less than 10 minutes. After installing the side brushes and fully charging the device (it takes about 5 hours to fully charge the battery), I downloaded the EcovacsHome app, connected the OZMO 950 to the app (which only works on a 2.4 Ghz network), and added the Ecovacs skill to Alexa so I could control the robot using my voice.

The OZMO 950 packs a ton of features and functionality into a relatively small robot. To help promote a compact design, the OZMO 950 has a hood that lifts up, with the dustbin hidden underneath. I can easily grab the dustbin by the handle when I need to empty it. Under the hood also sits the cleaning tool, so I don’t lose the tool when I need it to clean the main brush roll.

The mopping plate attaches to the underside of the unit (similar to the way most dustbins attach to robot vacuums). I can use the included reusable microfiber cloth, or I can use one of the included disposable cleaning cloths. They securely attach onto the cleaning plate with a Velcro-like adhesive that doesn’t wear down over time.

On top of the unit, there’s a large “eye” that helps the OZMO see its surroundings and map the room. You’d think the addition of the eye would make it so the Deebot would have trouble traveling under furniture, but it doesn’t. At 93 mm tall, the unit is still slim enough to travel under tables, couches, and beds.

One complaint our reviewer had about its predecessor, the OZMO 930, is its short battery life. The OZMO 950 has an extremely lengthy battery life, running for up to 200 minutes on a single charge. Plus, if it happens to run out of battery during the cleaning cycle, it will automatically go back to the charging station for a boost of power and then resume cleaning.

When I vacuum with the 950, I can use either the main brush roll (which is better for carpets and deep cleaning) or the direct suction option (which is ideal for mopping and daily cleaning). The OZMO can detect carpets, and it revs up the suction power when it goes over carpets to grab up deeply embedded dirt and debris.

I watched the robot travel around, sucking up the dirt from each area of my hardwood floors. As soon as it hit an area rug, I could hear it revving its engine and working harder. The suction power is so strong (24 cfm on high), the OZMO 950 can absolutely replace an upright unit.

The mopping process is pretty painless — just fill the water reservoir, attach a cleaning cloth (either a reusable cloth or a disposable one), and then install the mopping plate onto the Deebot.

After installing the mopping plate, the Deebot 950 knows to go into OZMO mopping mode. What is OZMO mopping? Basically, the Deebot can mop and vacuum simultaneously, so you don’t have to perform the two tasks separately. The OZMO can remove up to 99.26 percent of bacteria from floor surfaces.

There are four different water flow levels: Low, medium, high, or ultra high. The low water level is for lighter mopping and it leaves the floors barely wet after each pass, while the ultra-high water level cleans better as it wets the floor more as it travels. I can also choose between four different vacuum suction powers: Quiet, standard, max, or max plus. The quiet mode is good for OZMO mopping, as I can barely hear the vacuum, but it still sucks up bits of dust as it travels around and mops the floors.

The OZMO 950 has Smart Navi 3.0, which uses lasers to help it find its way around your home. Some of the previous Deebot models, like the Deebot 711, have Smart Navi 2.0, which uses optical technology.

The 950 is fast. It travels around quicker than any robot vacuum or mop I’ve ever seen. It’s efficient in its automatic cleaning path, cleaning edges first, and then going back and cleaning the middle of the floor in an “S” pattern.

The OZMO 950 has Smart Navi 3.0, which uses lasers to help it find its way around your home.

One thing that really impressed me about the 950 is its ability to orient itself and find its location even after I interrupt the cleaning cycle. This was a problem with older Deebot models — the robot would often have to start a new cleaning cycle if I stopped it to untangle something from the brush, or to move the robot to another room. The 950 can detect its own location and resume the same cleaning cycle. Even if I move the dock, the robot can recognize the change and adjust without messing up my map.

Speaking of mapping, the OZMO 950’s mapping capabilities are exceptional. It has multifloor mapping for homes with more than one level, and it can save up to three different floor maps.

Like many other Deebot models, the OZMO 950 talks. It tells me when it’s charging, let’s me know when it’s starting to clean, or when it’s saving the map. It’s Google Home- and Alexa-compatible, so I can control the robot with my voice too. I can sit on the couch and tell the OZMO to clean my house while I relax.

The EcovacsHome app is already one of the more feature-rich robot vacuum apps available, but the combination of the app and the OZMO 950 takes the robot vacuuming experience to a totally different level.

When the Deebot is in OZMO mopping mode, it does avoid carpets. But I have one very thin area rug in my entryway that it travels over. I had to create a “no mop” zone in the app to prevent it from traveling over that thin rug while mopping.

The 430-milliliter dustbin on the OZMO 950 is on the smaller side, but still sufficient. I didn’t need to empty it during the cleaning cycle, but I couldn’t run more than two cleaning cycles without emptying the bin.

The Ecovacs Deebot OZMO 950 comes with a one-year limited warranty.

There’s no denying that the Deebot OZMO 950 is an advanced, feature-rich robot with powerful suction and exceptional cleaning performance. The OZMO 950’s laser-guided navigation system coupled with its overall awareness of itself and its surroundings create a device that simply makes life easier for the user. The biggest downside to the 950 is its price tag.

The OZMO 950 retails for $900, which is on the higher end of the price spectrum. Sure, the unit is advanced in terms of its power, mapping, navigation, and features. But, customers have come to rely on Ecovacs as a brand that produces affordable robot vacuums that still have those higher-tier features.

If you’re looking for a lower-priced robot that still has the same advanced navigation, the Ecovacs Deebot 901 is a stellar option for under $300. The 901 only vacuums however, and it doesn’t mop. The same goes for the Deebot 711, which has Smart Navi 2.0. I reviewed the Deebot 711, and I appreciated the device’s top-of-the-line features and affordable price point (you can buy it for around $400).

If you’re looking for a 2-in-1 unit, there are other inexpensive robot vacuum and mop combinations on the market, such as the iLife V8s (sells for around $200 on Amazon), but you won’t get the advanced navigation and app features you get with the OZMO 950.

In addition to being a high-quality unit, the OZMO 950 also provides a slew of extra accessories (an extra filter, side brushes, and extra mopping cloth). The OZMO 950 should last you for years to come, and you shouldn’t have to spend a ton of extra cash on replacement accessories.

Yes. If you want to completely automate vacuuming and mopping in your home, and you’re willing to spend a bit of extra dough to do so, the Ecovacs Deebot OZMO 950 won’t disappoint.