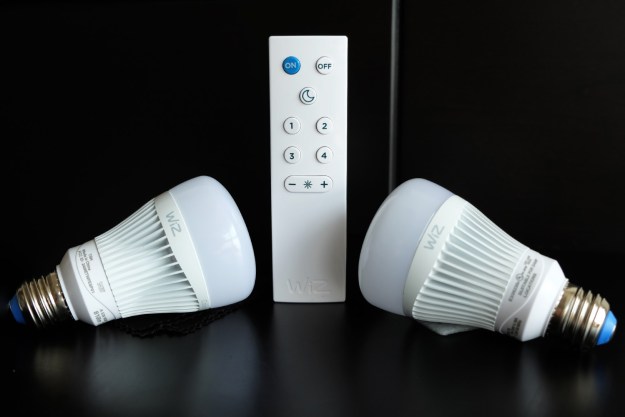 Changing the mood or décor of a room is as easy as a simple flick of a light switch now that color LEDs have gone mainstream. No longer is unique lighting limited to expensive and complicated setups done by professional installers. The upstart Wiz Smart Connected Lights have competition in established players such as Philips Hue, Lifx, Osram Lightify, and Ilumi. In this review, we see if Wiz lights shine as bright as the rest.

Right off the bat, Wiz does a lot of things correctly. There are both white and color bulbs available. They are compatible with digital voice assistants like Amazon Alexa and Google Home, plus automator apps like IFTTT. The app is available for both iOS and Android. They even included a physical remote along with the two bulbs in the $70 starter pack.

The bulbs also come with Wi-Fi built-in. Unlike other smart lights, Wiz doesn’t need a hub connected to a router to communicate with the bulbs. The company promotes this as a differentiator, which it is. Often, smart lights like Philips Hue either need hubs for Wi-Fi, or Bluetooth for ad hoc connections in closer quarters.

Our review samples were standard A.E26 LEDs with claims of 810 lumens, basically the equivalent of a 60-watt incandescent bulb. We also tested Wiz’s system with the Hero, a lamp that needed to be plugged into a power outlet because it has no battery inside.

The color bulbs can access 16 million colors in the RGB spectrum, again, no different than what other smart light bulbs can do.

The advantage of a hub is that it does all the work in distributing the connection from the router to all the compatible connected lights. Wiz’s lights require setting up the bulbs individually and connects to a 2.4GHz network band. Dual-band routers are common, so if you’re using two SSIDs to broadcast the 2.4GHz and 5GHz bands, then simply connecting to the former on the app is all that’s needed to get the process going.

We had no success connecting the Wiz bulbs to the Netgear Orbi or Eero 2nd-gen systems.

However, this posed a problem for us with Wi-Fi mesh routers that consolidate the SSID into one band. We had no success connecting the Wiz bulbs to the Netgear Orbi or Eero 2nd-gen systems. We were able to do it with the D-Link Covr and Linksys Velop, however. The Covr also uses one SSID, but we tried a workaround by creating a guest network specifically on the 2.4GHz band to enable the connection. It worked well, and we had no issues controlling the lights even after switching over to 5GHz.

Such workarounds simply weren’t possible with the Orbi and Eero. We tried setting up the bulbs by moving as far away as we could from the mesh in hopes that it would automatically steer us to the 2.4GHz band, but were unsuccessful. The bulbs just wouldn’t connect.

Sticking to that band is limiting, but also understandable. You get better range with 2.4GHz, meaning that lights in rooms further away won’t wind up in weak coverage areas.

Turn up the lights

Once up and running, we saw a laundry list of options and features in the app. We set up the bulbs to work with both Alexa and Google Home. We created some new scenes with different color combinations, including color cycles with varying speeds for a little pop.

The list of presets are a good mix, and include things like fireplace, ocean, romance, sunset, club, spring, summer, fall, Christmas, Halloween and several more based on places or things. Wake-up and bedtime are progressive modes that work over 30-minute periods when scheduled. Functional ones like night light and plant growth are thrown in too.

There is a fair amount of room for customization beyond creating color scenes. The moments feature was interesting in that we could create a shortcut to a scene or preset and tie it to a photo from our phone. It’s not plucking colors from the photo to display in the bulbs, but rather using the photo to manually create a scene that might resemble it. We could trigger different moments this way, and even share them with other users, including on social media. We never really latched onto the appeal Wiz intended for this mode, though, and ultimately ignored it after about a week of testing.

Easily the one element of the starter pack that felt the cheapest, the remote sometimes failed to register a button push.

One caveat we noticed with brightness is that we needed to play around with the white light slider in the app to gauge output. Daylight is the brightest preset at 4,200K, based on Wiz’s assessment, putting it in the ballpark of a 60W incandescent bulb. Sliding either toward warm or cool lighting reduces the lumen count, effectively making the daylight preset the default true brightness setting.

Colors never got anywhere near that bright, which wasn’t a surprise because they generally aren’t designed to anyway. We couldn’t get an exact number, but we would venture to say that it’s less than half the total lumens.

The physical remote is a nice touch with its four customizable presets, including off and on buttons and a dimming toggle, but we were left wanting for its execution. Easily the one element of the starter pack that felt the cheapest, the remote sometimes failed to register a button push. Only at close range did it work with a little more regularity, though it was no match for the consistency of the app.

Voice control was also a mixed bag, albeit certainly more convenient. It was odd that we had to qualify commands with Alexa by including ‘my Wiz’ in the query. For example, we could say, ‘Alexa, tell my Wiz to change lights to ocean.”

In contrast, Google Home did change colors, but could not handle any presets. We could also tell it to switch with more natural language, negating any use of ‘my Wiz’ in the query.

In fairness, Google Home isn’t capable of doing this with other smart lights, including Philips Hue. Alexa can change colors on other lighting systems, so why that functionality didn’t extend to Wiz is unclear. We liked the potential shown with Wiz’s lights, but we’d like to see more consistency and dynamism so that they become second nature to use. They’re not quite there yet.

Wiz offers a five-year warranty guaranteeing the bulbs will not die out during that time. If they do, they will replace the dead bulbs.

Wiz’s pricing strategy does make it an intriguing alternative to other established, yet more expensive, brands. The starter kit with two bulbs and the remote is $70. Each additional color bulb is $40, with white-only bulbs coming in at $25. Compared to a three-pack Philips Hue starter kit with a Bridge, which costs $200, Wiz is a bargain.

Most of what Wiz does is also not that different from Hue. Many of the same limitations in voice control apply to every smart lighting vendor, so we can’t single out Wiz too much for that at this stage. The differences appear more in the nuances of the bulbs and the app. Hue, Lifx, Ilumi and others feel smoother, and assuming Wiz moves to plug the holes with firmware and software updates, there is decent performance here — provided you have a 2.4GHz SSID.

Philips has ruled the roost with its Hue lineup, benefitting further from third-party support. Developers have created solid apps that work with the lights, including Ambee, OnSwitch, and Thorlight, among others. Though Wiz has an impressive array of bulbs and lamps, Hue goes even further.

Others do too. Osram’s Lightify lineup is extensive, with indoor and outdoor bulbs. Lifx has also expanded its lineup to include different types of bulbs. If Bluetooth bulbs are more to your liking, Ilumi and Elgato Avea are solid choices, though you lose the ability to control the lights remotely like you can with Wiz, Hue, Lightify, and Lifx.

LED bulbs are supposed to last for years and years, but the 20-plus year claim so common among manufacturers has faded in favor of metrics. For example, Wiz says its bulbs will last for up to 25,000 hours, amounting to 18 years of life based on three hours per day. The estimated energy cost is $1.39 per year at an average of 11 cents per kWh. These are baseline numbers that are subjective because lighting habits and brightness play into the final results. Either way, you should expect years of use out of Wiz’s bulbs.

If you look at Wiz as the poor man’s Hue, then yes, spending less to get a somewhat similar experience isn’t a bad move. Lifx also works without a hub and has wider integration with platforms such as Apple HomeKit and Samsung SmartThings, so if you’re willing to spend a little more, go with Lifx instead.