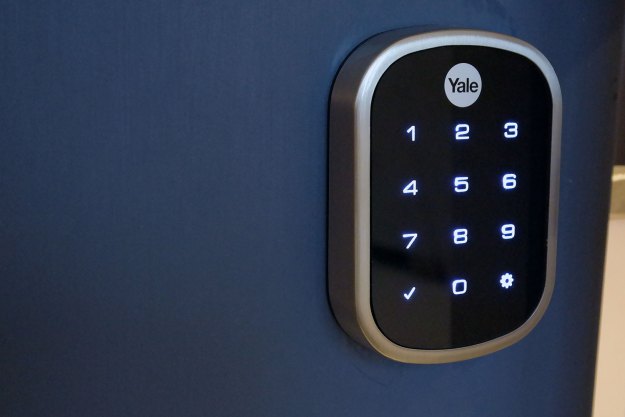 “Yale and August’s first collaboration dazzles in looks and smarts, but fizzles in seamless integration.”

Late last year, security stalwart Yale announced the acquisition of the August Home smart lock business, after sniffing around the smart lock sphere for some time. Its Nest x Yale collaboration was pretty, but far from perfect, while the company’s Real Living brand boasts a range of connected Bluetooth locks that have lined the shelves of your local big-box hardware store for several years. The merger was a wise move for both companies. August would benefit from the scale and financial security of a major conglomerate, while its technology and UX design would provide an injection of modernity to a 180-year-old brand.

Yale offers a range of Network Modules for the Assure Lock SL, which neatly slot into an aperture inside the lock. They offer Z-Wave Plus, ZigBee, and HomeKit compatibility, but they can be tricky to set up. The Connected by August label delivers much of this connectivity and more with the simplicity and style we’ve come to expect from August.

The partnership’s debut device certainly shows promise, but it’s clear that it’s a first, rapid attempt to combine technologies and design philosophies. As such, there’s certainly room for improvement.

Available in a choice of keyless ($279, reviewed here) or traditional key access designs ($299), the Bluetooth-enabled Assure Lock SL fully replaces the existing deadbolt and lock controls on an exterior door. It can be locked or unlocked in a host of ways: by simply approaching the door (with smartphone in pocket), by tapping an entry code on the illuminated touchscreen pad, or via the August mobile app.

Remote access and monitoring of the lock is supported via the included August Connect Wi-Fi Bridge, which plugs into a nearby power outlet. Once configured, the Assure Lock SL is further boosted by support for Amazon Alexa, Apple’s Siri/HomeKit, and the Google Assistant. Further integrations with the likes of SimpliSafe’s security kit and even rental platforms like Airbnb and HomeAway can be unlocked with just a few taps.

We’re also delighted to see the inclusion of August’s DoorSense feature, which we first encountered in our review of the August Smart Lock and Smart Lock Pro. A small sensor, fitted to your door frame, tracks the position of your door, so you’ll know if it’s been left open. Overall, this updated model offers significant feature enhancements over its predecessor.

In our review of last year’s Assure Lock SL, we swooned over the lock’s sleek, smooth onyx face and small footprint, calling it a “stylish device that you’ll admire every time you walk through your front door.” A year on and our opinion hasn’t changed, so we’re happy that this new model offers exactly the same touchscreen design that graced the original lock.

At 3.5 inches long, 2.5 inches wide, and half an inch deep, it makes more of statement than a traditional key lock, but it’s available in a choice of finishes, including Satin Nickel, Polished Brass, and Oil-Rubbed Bronze, to blend-in.

That goes for the supplied deadbolt too. We heavily criticized the deadbolt supplied with the Nest x Yale lock, and we assume the same model found its way into the Assure Lock SL box. Unlike the easily-extendable deadbolt supplied by Kwikset in the Kevo smart locks, Yale’s is stiff and difficult to work with. Once we managed to extend the bolt to fit our door, we were then unable to shorten it. We also found ourselves having to jiggle the lock and its fittings considerably to line them up. Someone give August design guru Yves Behar a call, quick!

Installation doesn’t take too long, but you’ll first need to explore a plethora of flyers and instructions in box from both brands before you get started. Overall, we found the experience lacked the finesse of August’s own (admittedly simpler) lock installation, which is more fluid and better explained. For example, a flyer in the box demands that you first install the August app before installing the lock. However, when you do so and select the Yale lock, you’ll find their guidance assumes you’ve already installed the lock on your door. Encounter a technical problem during installation? Confusingly, there’s not one but two technical support hotlines (one Yale branded, one August) you can call.  Registering your lock with the August app? Enter a master PIN code on the lock, then perform a further four steps to finish up in the app. We could go on.

Yale’s clunky deadlock is stiff and difficult to work with — a cause of real frustration.

While these are minor issues overall, in these early days of the partnership, it’s very easy to see where the lines between the two company’s propositions butt up against each other. But considering August’s previous attention to detail in this area, we’re surprised to see such a lack of polish and seamless design in the installation experience.

If you needed to justify this lock’s price premium over last year’s Assure Lock SL ($250 with network module) or August Smart Lock (from $219) then there’s good news available. Yale’s partnership with August delivers the touchscreen keypad, which isn’t available on any August Smart Lock. If you want secure code entry, you previously would have to find room for an ugly $59 Smart Keypad accessory. There’s even better news for owners upgrading from an older Yale lock: August’s smart locker is packed with advanced features. If you already own an Assure Lock, simply swap out the Yale network module for a new Connected by August Kit (packing the August Connect Wi-Fi Bridge, DoorSense sensor, and August network module) and you can join in the fun. The bad news? It will set you back $130.

Alongside the aforementioned remote access, spend a little time with the August app and you’ll discover convenient features like automatic door locking, which triggers after a preset delay. You can, of course, add multiple family members to the effortlessly simple app, who can then operate the lock with a tap of the phone. Secure virtual keys can be sent electronically to guests, configured with a temporary access period or on a recurring schedule. These keys require your guest to download and install the August app, but if that’s too much trouble, you can simply set a personal entry code for them and they’ll have access via the keypad. Like virtual keys, entry codes can be enabled on a permanent, recurring, or temporary basis. For house guests and babysitters, it makes home access both simple and flexible.

As you’d expect, an event log can be easily checked to view the day’s comings and goings. Presented in a simple timeline, automatic operation of the lock is stamped with the user’s name, allowing you to see who is operating the door. Smart Alerts allow you to configure a range of smartphone notifications, such as when a particular user operates the lock, when the lock is manually operated, or whenever the door is left ajar.

When compared to the entry-level August Smart Lock, which we love, the combination of the Assure Lock SL’s sleek touchscreen and the wealth of features from August offers a real boost in value and convenience.

There are some “watch outs,” however, as long-term August smart lock owners will be happy to share. Several features, notably auto-unlocking, rely on a Bluetooth connection between the lock and your phone. It means both the consistency and timeliness of operation can vary both by phone model (Android in particular) and other factors. With other August locks — and the same phone — we’ve experienced joyous times when the door magically unlocks automatically as we step on our porch. Other times, we need to wait a few seconds at the door to hear the familiar grind of gears. Sometimes the lock simply ignores our presence.

The combination of the Assure Lock SL’s sleek touchscreen and the wealth of features from August offers a real boost in value and convenience.

Obviously, at this point, we can’t share a long-term perspective with the Yale Assure Lock SL. Our experience over a couple of weeks was positive, and we didn’t encounter significant connectivity issues. We’ll update this review as life with the lock evolves.

Once you’re up and running with the basics, you can begin to explore a generous array of thoughtful smart home integrations, which we found were easy to set up and worked well. It no longer matters whether you’re pals with Alexa, Siri, or the Google Assistant, as all are catered for here. Hook up the lock to the Nest Learning Thermostat, and you can set your heating to Away Mode when you lock the door or fire it up on your return. Meanwhile, advanced users can experiment with supported IFTTT recipes, which integrate the lock with smart lights, garage door openers, alarm systems, smart cams, and even your TiVo. While these integrations are available on all August locks, many are new to Yale and go some way, at least, to justifying that upgrade price.

The Yale Assure Lock SL warranty is somewhat convoluted – another sign of the product’s split personality. The lock’s outer finish and mechanical components are protected by a lifetime limited warranty, while its electronics are protected for one year.

Compared to last year’s model, the addition of August’s connectivity and features to the Assure Lock SL offers a real enhancement, but one that leaves us wanting more. Like the Next x Yale lock we reviewed recently, it’s easy to see where the two propositions have been glued together and, in some areas such as installation, it’s a messy job.

The partnership clearly makes sense. Combine August’s first-class user experience design and smart security features with a top-class keypad touchscreen, and you have a brilliant concept. But it’s a concept that deserves more time to design (from a hardware perspective) and execute (from a user experience perspective) than the Assure SL was given.

We’re sure there are great things to come from the marriage of Yale and August, and the Assure SL is a solid start. It’s certainly more than a prototype, but is clearly the product of two companies still figuring out how to work together. If you’re desperate for smart touchscreen keypad, then August’s features make the Assure SL one of the most versatile locks around — a definite upgrade on the model we reviewed last year. For everyone else, we’d advise waiting a while to see what this exciting new partnership can deliver in 2019.

If you’re happy to forego the touchscreen keypad, last year’s August Smart Lock ($219) delivers the smarts and sophistication of the Assure Lock SL, with added simplicity. A keypad accessory is available for the lock if you really need to use your fingers.

A lifetime limited warranty (on the lock mechanism and housing) and support of a security stalwart in Yale means that you should have no concerns on longevity. August frequently updates its app and lock firmware with bug fixes, and the acquisition by Yale should provide the resources for continued support.

Yes — for existing Yale Smart Lock owners envious of August’s rich features, who will find the $130 upgrade kit pricey but worth the investment. Otherwise, our hunch is that 2019 is going to be the year we’ll see real fireworks from the Yale/August hook-up.