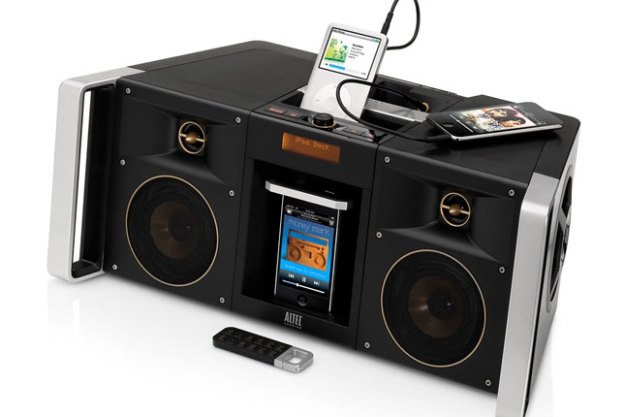 “The MIX’s comprehensive list of functions and awesome sound quality make it one of the best iPod speaker docks available.”

Anyone who was a teen in the ‘80s will tell you that THE must-have item at the time was a boombox. It didn’t matter that they were expensive and ate up pricey batteries for breakfast; being able to blast your jams anytime and anywhere was crucial for your coolness quotient. As time passed and technology advanced from cassette to CD, the boombox hung around, but its popularity waned as the portable CD player nudged in on its territory. Recently, with the introduction of the iPod, the boombox has almost been wiped out by the now super-popular iPod speaker dock. The trouble is, most speaker docks aren’t all that portable and very few can be taken down to the beach or the park because they won’t run on batteries. Those that do are usually puny and don’t put out much sound.

The MIX boombox weighs in at about 10 pounds (sans batteries) and its trapezoid shape measures roughly 19.5” (W) x 7 ¾” (H) x 7” (D). Its rugged black plastic cabinet is accented with silver handles and gold trim around the speakers. Handling it, we don’t get the feeling we’re dealing with a high end piece of audio gear, but the MIX feels well built and study enough to handle plenty of abuse.

Along with the MIX boombox we found a power adapter and cord, several iPod/iPhone dock adapters, a nifty clip-on remote with battery and two 4” long 1/8” cables for auxiliary devices.

Altec Lansing did a great job of designing the MIX. Several of the key features found conspicuously absent on other iPod speaker docks are available on the MIX including an FM Radio tuner with four station presets, two aux. inputs, a bright and clear LCD display and a 7 band graphic EQ with four adjustable presets. In keeping with the boombox concept, Altec Lansing incorporated three grab-handles, a security bar (which moves up and down to allow for easy iPod docking) and a handy, clip-on remote control with buttons that control power, source, volume, track advancement and EQ/FM presets. The amber LCD window shows iPhone or iPod model info, song artist and song track information, volume level, and FM signal strength and station number. Most notable, though, is the MIX’s ability to be powered by 8 D-Cell batteries. They’ll set you back about $20.00 and weigh down the MIX considerably, but Altec Lansing says you’ll get a solid 30 hours of play time from them.

Altec Lansing doesn’t disclose how much Class-D power the MIX is packing but trust us when we say it is plenty powerful. The ample power drives two 1” horn loaded tweeters, two 3” midrange drivers and a beefy 5.25” side mounted subwoofer which is supplemented with a 5.25” passive radiator on the opposite side.

The MIX comes with three EQ presets (Rock, Pop, HipHop and Altec) and some basic bass and treble control but if you really want to customize the sound (and we did) you’ll need to get at the 7- band EQ. The 7-band EQ is a little tricky to navigate to but once you know the three button combo to press, making your adjustments is a piece of cake.

We let the MIX break in for about 50 hours but snuck in a listen periodically during that time. The MIX did benefit appreciably from the break-in period so keep that in mind should you decide to audition one. We employed our usual mix of jazz, rock, hip-hop, funk and folk during our listening tests and played back several of the tracks in multiple rooms (and outdoors) to gauge the MIX’s performance in different environments.

Altec Lansing describes the MIX’s bass performance as “fierce” and we’re inclined to agree. It isn’t the tightest bass response but it is tuneful and robust and blends extremely well with the midrange frequencies. Even outdoors, the bass was palpable and that is extremely impressive for a unit of this size. Though a little boomy out of the box, we found EQ adjustments reigned in the bass response and gave us a more balanced, natural response.

Midrange performance was above average. Vocals sounded natural and didn’t exhibit any excess resonance- a common side effect of plastic enclosures.

Treble response was occasionally dodgy. We noted that the quality of the music track had a lot to do with how the MIX ended up sounding. Tracks with a lot of high frequency splash came across a little too forward with the MIX. The horn loaded tweeters seemed to beam certain frequencies directly at us which took away from the 3-dimensional sound that it otherwise exhibited. We were able to compensate with some quick treble adjustments indoors but found that the extra hot highs worked in the MIX’s favor when the unit was placed outdoors.

In general, we felt that the MIX boombox’s sound quality was well above average, though not something you would apply the “audiophile” label to. The blend between the tweeters, mids and subwoofer was reasonably balanced and, when it wasn’t, easily adjusted through the on-board EQ.

The MIX boombox by Altec Lansing packs a refreshing combination of features, connectivity, portability and powerful sound. While it performs well indoors, this retro styled boombox is most at home on your deck, patio or next to your breakdancing mat. The MIX’s comprehensive list of functions and awesome sound quality make it one of the  best iPod speaker docks available and, at under $250.00 it’s a bargain, too.