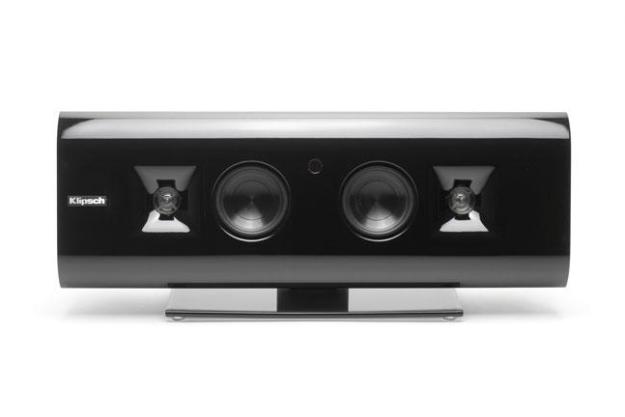 “We loved the full, meaty sound and high-class detail the G-17 pulled off, especially considering its compact size.”

When it comes to wireless music streaming, AirPlay, for the time being at least, remains our preferred technology. For us, DLNA is insultingly slow and limited, and Bluetooth, on top of being historically unstable, is limited by its operable range and (with certain exceptions) sound quality. A lot of the Bluetooth devices we’ve tried sound more like FM radio than, say, CD.

While AirPlay is not without its own quirks (and expense), it allows you to move about your space more freely, sounds great and, best of all, puts control of your music right in the palm of your hand, or in front of you on your desktop. Unfortunately, we’ve yet to find an AirPlay speaker that we could really fall in love with. For that reason, we tend to get a little excited whenever a new AirPlay speaker option comes around.

Such was certainly the case when we first learned of the Klipsch Gallery G-17 Air. From afar, it appeared to have all the ingredients needed for a delicious audio experience and, given Klipsch’s excellent speaker-dock offerings in the past, was likely to deliver. Well, it’s been a long wait, but the G-17 Air is finally available. When our review sample landed on our desk a couple of weeks ago, we wasted no time getting to work on our evaluation. In this review, we’ll talk about our experience with Klipsch’s G-17 Air AirPlay speaker, discuss its sound quality and lend our opinion on whether this device earns its $550 asking price.

Klipsch seems to be steering a lot more attention to its products’ out-of-box experience. The Mode M4S0 headphones gave us our first glimpse at this move, and cracking open the G-17 Air further reinforced that luxury feel. Klipsch recognizes it needs to deliver a premium experience if it intends to charge a premium price.

The first thing you’ll see upon opening the G-17 Air’s box is a pair of white gloves. We’ve seen these before and, while it may not be an original idea, it is definitely a smart one. We cast the accessories aside in order to get right to the main event, removing the top portion of Styrofoam to reveal the G-17 Air snug in a white cloth sack. After donning the gloves, we pulled the G-17 Air from its cocoon. As expected, its gloss piano black finish almost seemed to suck dust in toward itself- as if it were a black hole for fingerprints, smudges and airborne particulate — an issue with which we’re all too familiar. Indeed, the white gloves are practical, not some sort of cheesy stunt.

Packed with the G-17 Air we found a tinted glass speaker stand and associated hardware, some wall-mount brackets, a brick-sized power supply, card-sized remote control, a rather interesting speaker grill and an owner’s manual.

Getting the stand attached to the speaker was easy enough, and the rubber piece Klipsch provides to conceal the screws popped right into place, giving the installation a pretty clean look. It was here that we first noticed that some of the G-17 Air’s connections were now a little more difficult to reach than we’d like — more on that later.

Getting the G-17 Air up and running through our office’s Wi-Fi network was a piece of cake. Klipsch provides a free iPhone and iPad app that takes you through each step of the process. If you don’t want to use your iOS device, setup can also be taken care of via PC or Mac. If you get stuck, Klipsch has very detailed instructional videos online. After renaming our G-17 Air something clever, we were ready to rock out.

Aside from its obvious role as an AirPlay speaker, the G-17 Air does offer both a USB and 1/8-inch input on the back of the unit. The only issue we have is that they are a little difficult to reach unless you remove the decorative rubber piece that conceals the screws. And should you decide to wall mount the speaker, they would be inaccessible unless the speaker was removed, then replaced on the wall.

On the right side of the unit, we found buttons for power, volume up and down, an input selector and Wi-Fi switch, which is used primarily during set up. The included remote doubles these functions and adds in play/pause and track advance/reverse.

On the front of the speaker we found the unit’s two .75-inch compression tweeters mounted behind Klipsch’s proprietary horns. Accompanying the tweeters are two 2.5-inch long-throw woofers, which take on the double duty of producing both bass and midrange frequencies. Klipsch says the tweeters kick in with the treble at about 3kHz, and that the system has a rated frequency response of 57Hz to 23kHz with useable bass down as low as 4S7Hz. There’s a bass port on the left side of the unit.

Slotted right between and just above the woofers is the speaker’s infrared eye, which is virtually invisible, even with the grill removed.

Speaking of the grill: We think it’s a pretty well-conceived piece. The grill wraps around the back of the speaker and secures with magnetic roll-bars. Of course, we think the speaker looks just fine with no grill at all. So, have it your way.

As we previously mentioned, the G-17 Air can be wall mounted using two keyhole slots on the back of the speaker. While we dig the look of the stand, we think wall mounting is pretty terrific idea for this speaker. Its slim design, light weight and gorgeous gloss-black finish make it a great candidate for wall mounting in the bedroom, living room, kitchen or study. Since up to four G-17 Air speakers can be connected to a single Wi-Fi network, multiple zones of a house can be served with ease.

We think the Klipsch G-17 Air sounds spectacular, especially given its size. That Klipsch was able to achieve such robust sound from a speaker that is just a fraction of the size of B&W’s Zeppelin Air is a testament to the company’s engineering skills. That it doesn’t look like a blimp is another seriously big feather in its cap.

To be fair, the Zeppelin, until now, has been the only truly high-quality AirPlay speaker we’ve tested that we thought was worth considering laying down six “Benjamins” for. To this day, it still stands as one of the best sounding AirPlay speakers available. With that said, it is worth noting that we think Klipsch just did a better job in general.

Bass response from the G-17 Air was robust and punchy, but never overwhelming. For example, the bass violin bowing in the orchestral intro on Seal’s rendition of “Stand by Me” carries a lot of weight, but the heft is often lost on less-than-capable systems. The G-17 Air was able to deliver the beautifully orchestrated bass with sophistication and precision timing.

The speaker was also able to handle the more muscular side of the bass spectrum with plenty of authority. Jamiroquai’s “Canned Heat” starts with a descending bass guitar line that hangs out on a low B before kicking in with a four-on-the-floor kick drum groove that’s so funky it even managed to help make Napoleon Dynamite look good. The G-17 Air pulled off the bass drum’s punch with far more power than anyone is likely to expect from such a compact speaker. Expect your friends to go looking for the subwoofer that just isn’t there.

Treble response was equally enjoyable. Once again, Klipsch has proven that its days producing excessively bright audio products are well in its past. The G-17 Air is a testament to the company’s reformed approach to sound which seems to favor tight, punchy bass and silkier highs that sparkle when necessary. Even our most brutally bright test tracks were tolerable. Sure, the G-17 Air let us know the source material was anything but balanced, but it didn’t drive a 3-foot-long needle into our eardrum in the process.

If we have to be critical (and we do…it’s in the job description) we’d say that the only perceivable weak point of the G-17 Air’s audio production (and a minute one, at that) is its midrange. A larger driver may have enabled a larger midrange presence without sacrificing the stellar bass response that Klipsch was going for, but that would have required a larger cabinet and then some of the design appeal would fly out the window. The game of compromise is inescapable when it comes to speaker design and, in the G-17 Air’s case, it was midrange performance and stereo separation that took a subtle hit. Those who like “in your face” vocals and guitars, or a 6-foot-wide soundstage may find themselves wanting a little more presence out of the speaker, but we like the trade-off and can’t really dock Klipsch points here.

Sadly, not all is perfect with the G-17 Air. It’s frustrating too, because the blame, as we understand it, doesn’t lay with Klipsch; it actually goes to an issue of hardware compatibility for which Apple is responsible.

When we used an iPhone 4S, iPhone 3Gs or iTunes on a PC or Mac, the G-17 Air processed the incoming audio stream and played it back flawlessly for hours at a time. When we tried an iPhone 4S, however, it was game over. We were lucky to get just a couple of seconds of sound before audio would cut out. From there, audio would either return briefly, or the G-17 Air would be sent into a tailspin, disconnecting from our Wi-Fi router and spending sometimes a couple of minutes re-establishing the link.

The good news is that the problem only exists with the iPhone 4S, and Klipsch assures us this issue will be resolved with the next iOS update. In fact, Klipsch has verified this, as it has access to the beta version of Apple’s planned iOS revision which is meant to be available “soon.”

The bad news is that this is a major problem. If I purchased a $550 AirPlay speaker but wasn’t able to use AirPlay with my iPhone 4S for a few months, I would be really upset.

Speaking for myself, I would certainly wait for the problem to be resolved by Apple. The speaker sounds that good. I’m not so sure about others, though. We live in a time when instant gratification often takes priority to long-term satisfaction, and that could mean a lot of returns.

[Update 3-16-12: We’ve been able to re-test the G-17 Air since Apple released iOS 5.1 and can confirm that the update has resolved all AirPlay streaming issues]

The idea of a speaker that blends slim, wall-mountable design with excellent audio performance and the convenience of wireless audio streaming is an understandably popular one. It’s a really tough proposition, but Klipsch has nailed it with the G-17 Air. We loved the full, meaty sound and high-class detail the G-17 pulled off, especially considering its compact size.

The G-17 Air is the best-sounding AirPlay speaker dock we’ve tested so far and, therefore, wins our Editor’s Choice award.

The best smart speakers for 2022

This Alienware gaming PC is on clearance at Dell — save $580!