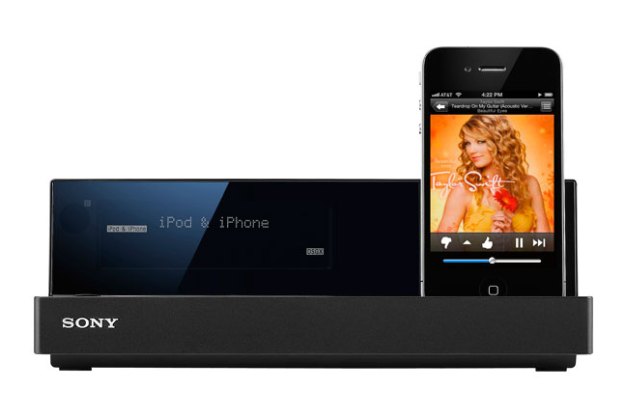 “We just can’t get over the fact that, for $50 more, you can get yourself the same dock with built-in speakers.”

Check out our overview of the Sony HomeShare system for more information, and links to reviews of other HomeShare components. The NAC-SV10i is designed as a stand-alone iPod dock and music server. Think of it as the hub of your wireless music operation. It comes with a power adapter and a slim, full-function remote control. The NAC-SV10i is the lower priced option between Sony’s two iPod docks because, unlike the costlier version, it has no built-in speaker. This model is intended to function as a component of a larger system or a server for wireless network speakers. Though it looks pretty dated, the NAC-SV10i combines modern day elements such as Internet radio access, network music streaming and wireless audio streaming into a small component that adds in everyday convenience features like a clock, timer and remote control. On the back of the unit, you’ll find an Ethernet port for wired Internet connection, a ⅛-inch aux. input jack and a pair of stereo RCA output plugs. The front “deck” of the dock offers basic, touch-sensitive controls for commands like play/pause, track advance, options, function and enter.

The NAC-SV10i worked great with our iPhone attached and providing the content. Here, we had the option to control our iPhone by touch, or allow the NAC-SC10i to provide the user interface. Given the limited display on the dock, we chose to operate the iPhone directly. Be sure to check out our section on Sony’s touchscreen remote, though, because we found it provided an excellent interface. The DAC built into the dock isn’t likely to win any audiophile awards, but its output sounded clean and well resolved on our reference audio system. We also liked that the variable analog output allows the user to connect directly to an amplifier and speakers, without necessarily involving a pre-amp or receiver. With our iPhone disengaged from the dock, we were able to use Sony’s free Network Audio Remote app, available for both iOS and Android devices. This app (or the RMN-U1 remote) is definitely the way to control the dock and access Internet radio or networked music. Without the app, you’re stuck using the small, three-line LCD display on the dock itself, which is nearly impossible if you have more than just a few songs on your network. The limited LCD display could be left to serve as a clock or provide basic track information, were there some sort of video output and graphic user interface, but there’s no such feature. We also wirelessly streamed our music to the NA-S300 network speaker that Sony provided. In theory, if we had more than one wireless speaker around, we could have chosen to send the music signal to just one or all of them with the push of the “Party Stream” button. Party Stream is a system that links to and activates all HomeShare compliant devices. Unfortunately, we weren’t able to get sound out of the wireless speaker unless we used Party Stream. After 20 minutes spent verifying settings and trying different synching techniques, we let it go. We hope our situation was isolated because, frankly, a system like this needs to be plug and play. Otherwise, less technically inclined users are likely to jump ship. With Party Stream activated, we were able to play WAV, MP3, LPCM and AAC files of varying bitrates with no compatibility problems.

We just can’t get over the fact that, for $50 more, you can get yourself the same dock with built-in speakers. That being the case, we’re not sure why anyone would choose to get the “component” version. If just a few bucks more buys the convenience of on-board sound along with all the other great features, the choice seems like no-brainer. For this reason, we had to knock our rating down a half-point and suggest, instead, checking out the NAS-SV20i.

The best Bluetooth speakers for 2022: Marshall, Sonos, JBL, and more
The best noise-canceling headphones for 2022
Best Amazon Echo Deals: Get an Echo Dot for $25
Platin Audio’s wireless home theater speaker system now handles Dolby Atmos
What’s new on Disney+ in October 2022
The ‘streaming wars’ aren’t what you think
Google Chromecast tips and tricks to make you a master caster
How to set up a Google Chromecast to get streaming fast
How to clean your TV screen
How to share a Spotify playlist
How to watch the DC movies in order
Thursday Night Football streaming issues ‘going to be less and less a thing’
Grab this LG 55-inch OLED TV deal from Walmart and save $400