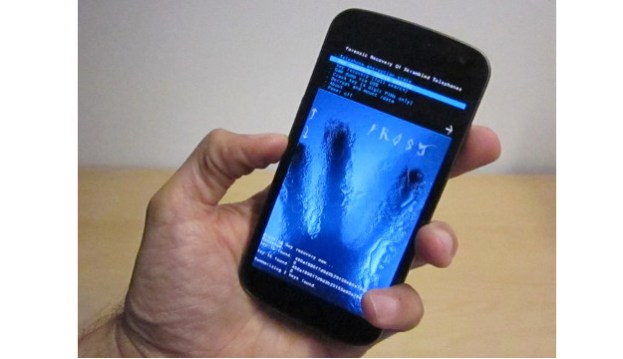 Researchers at the Erlangen University in Germany have come up with a system which could render private and even encrypted information stored on your Android smartphone available to hackers, regardless of whether it’s protected by a PIN code or complicated unlock gesture. It’s called a, “Cold boot attack,” and requires some special software, some patience and most importantly, a refrigerator.

The fridge is required to lower the temperature of the target Android phone. Once it has dropped below 10 degrees it’s quickly rebooted using a special technique which stops the phone reaching the unlock screen. With the phone in its fastboot mode, it’s attached using a USB connection to a computer and a new piece of software is flashed onto the phone.

This software, named FROST (which stands for Forensic Recovery of Scrambled Telephones), takes advantage of a phenomenon called Remanence, where previously accessed information sits about in the phone’s RAM for a few seconds just after it restarts. The freezing process has the effect of slowing down the data degradation to five or six seconds, which gives FROST enough time to grab the important parts before it’s all lost.

So what can it find? Your PIN code for a start, which will provide complete access to the phone, or if that’s not possible the team has discovered lists of contacts, web browsing history and photos inside the RAM. Normally, all this information is wiped after the phone is unlocked, and versions of Android 4.0 Ice Cream Sandwich and later use a clever disk encryption feature which protects against hacks with circumnavigate the lock screen; but neither are effective against FROST.

While any hack can be used for malicious purposes, this is designed to aid law enforcement groups, providing them with a relatively easy way of recovering sensitive data from new smartphones. It’s demonstrated on a Galaxy Nexus, for which an image of FROST is available, although it will in theory work on most other Android phones. That said, Forbes points out certain data is only accessible if the bootloader is unlocked, and very few devices outside the Nexus range are sold this way.

As with any hack which threatens to expose some or all the personal information we store on our smartphones, FROST is a cause for concern. However, a hacker is going to have to be pretty keen to get at your data to use this attack, and turning off your phone more often should mean less information is stored in the RAM to discover. So just chill out.