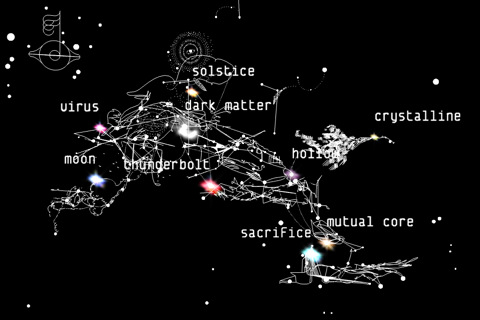 Leave it to Icelandic pop star Björk to shake up music marketing. The musician released her latest album, but instead of producing the traditional CD or selling singles via iTunes, Björk has packaged her new music in an app.

Biophilia is available in the App Store for free, and is described as “an extraordinary and innovative multimedia exploration of music, nature and technology.” Songs are presented via a galactic-themed interfaced, and the app updates to give users access to newly released songs. Lyrics, background, animation, and music scores with karaoke playback are also included.

In addition to giving her fans a new and exciting way to access her music, Björk is challenging the way we approach music production. There’s a much higher degree of interacting with the music, where you’re either taking a part in creating the song (like with the title “Virus”) or playing a game along to “Crystalline,” in which the accompaniment navigates you through a maze of gathering and sharing crystals.

All the profits for Biophilia are found via the in-app payments for individual tracks, which cost $1.99 each (one song, “Cosmogony,” is included for free).

The Internet has not been kind to the music industry, and both artists and recording studios have struggled to adjust. The onslaught of P2P downloading sites and consumers’ increasing comfort with technology means that free music was little more than a few clicks away. And while there’s been a significant (and effective) push to curb this behavior, the buying scheme has collapsed. Digital music continues to push CDs nearer to oblivion and subscription music services have made a considerable impact on how consumers have the ability to pick and choose–and going back doesn’t seem like an option.

But Biophilia is much, much more than just a way to listen to Björk’s new album on your smartphone. The game-like interactions and immersive experience make you connect to the music in an entirely new, innovative way. It’s almost like a learning tool, and one that requires you to be more than a passive consumer.

And not only does Biophilia give listeners a new way to access and experience music (while also reinforcing the buy-as-you-want plan), but there’s a possibility it could be a very lucrative method for artists and studios. The app market is exploding, and with smartphones becoming an increasingly common medium and one that users turn to for their music listening purposes, making albums readily available and built specifically for a mobile OS is genius.

If the app album catches on, what would it mean for music services? ITunes has a firm hold over music buying and storage, and plans like MOG, Spotify, Rhapsody, and Pandora could find some competition. These sites all have various benefits, but the concept behind Biophilia is so impressive and fully-featured that we could see some fans ditching music players and going straight for an artist-produced app. Is this the future of music consumption? Given that Bjork’s music targets something of a niche audience, it’s obviously too early to tell. That said, we hope it’s something musicians begin exploring and consumers take advantage of.

Of course, as with everything, there’s a flip side. Building and selling app albums naturally lends itself toward a host of in-app payment possibilities, which have their downfall. Prices could escalate and content could be disappointing, and then the app album would likely see an early death. But in the spirit of optimism and inventiveness, we hope this territory won’t be exploited too soon.

Check out the narrated intro for Biophilia below.