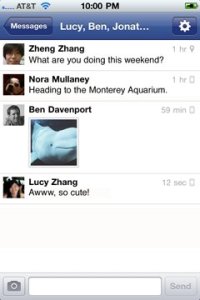 Do you still own a BlackBerry just for BlackBerry Messenger? Facebook’s new Messenger app might finally give you a reason to jump ship. Facebook is releasing Messenger for both iOS and Android, and it will allow users to send mobile messages to Facebook friends across phone platforms.

Now Facebook’s vision when buying app maker Beluga is becoming clear. The company has taken Beluga’s group messaging app and married it with Facebook contacts and messages. With Messenger, you can send messages to your friend and they will be either greeted with a notification or a text message, whichever they prefer. Facebook has carried over Beluga’s group messaging system as well, where users can message several people for a single large conversation. The app also allows users to include their current location in messages to help with coordinating group events.

This is not the first robust messaging app to hit the market. It all started with BlackBerry Messenger (BBM) from BlackBerry, and recently Apple introduced iMessage, but it is not in use yet. Google released Huddle, which uses Google+ and can also be used across mobile platform. Facebook’s Messenger has one slight advantage over all those services: size.

Facebook claims to have over 750 million active users, which is a pretty amazing user base. It will be interesting to see how all the other competing services fair with a new big kid on the block. Hopefully Facebook will be able to get this app on BlackBerry and Windows Phone 7 soon so that this can truly be a cross platform service.